To hear, is to play in ‘Omikronian’

Peter Stopschinski and Jimmy Burdine created an 8-bit-styled album. But it's not a video game soundtrack. It's the score and foley of a fictional video game being played in real (and musically stylized) time 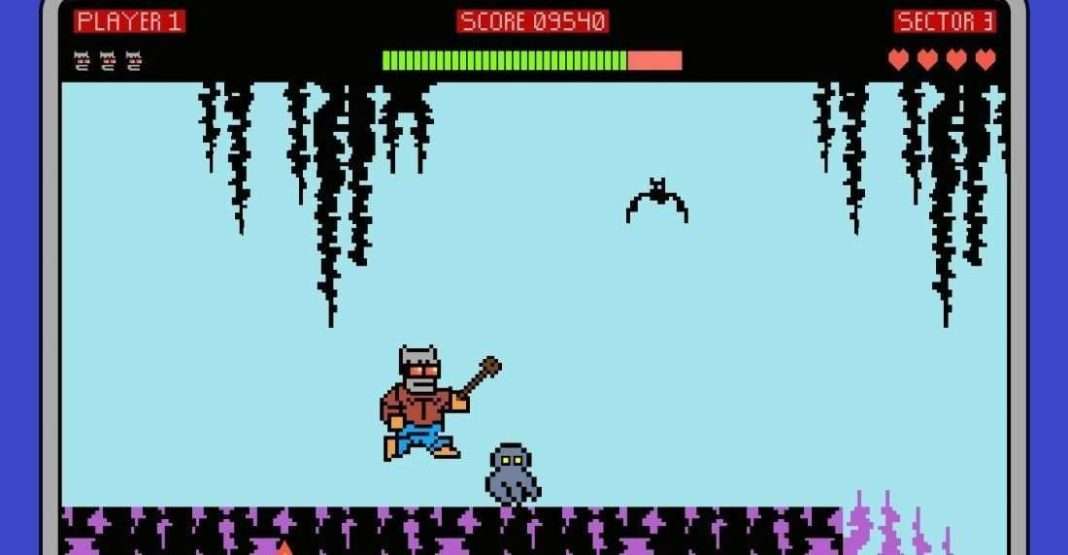 While some recordings aim to have listeners hear the rosin singing off a violin bow, there aren’t many that can make you feel the concave, smooth, and plasticy feel of the ‘A’ button on a NES controller.  “Omikronian” is the debut EP from 0MEGAVIZI0N, a new project by composers Peter Stopschinski and Jimmy Burdine. Stopschinski and Burdine are longtime friends and collaborators, also known for the ongoing projects of their Austinite band Brown Whörnet.

“Omikronian” tells the story of a protagonist named Pants Fad as they  “travel through time and space to save the future from certain doom brought forth by an evil thaumaturgist from Omikronia.” The 8-bit-styled album is not an actual video game soundtrack, but the score and foley of a fictional game played in real (and musically stylized) time: level scores are tallied, Pants Fad runs and jump, enemies attack, and Boss Battles emerge.

The initial sketches of the EP were drafted in the lulls between Stopschinski and Burdine’s work on the Brown Whörnet album “Doctor Dickle.” Unlike other Brown Whörnet endeavors, the music is not presented as a composition but as coming from a fictional alternate-dimension retro gaming device called the 0MEGAVIZI0N.

“It’s not a purist 8-bit album,” says Burdine. “It’s more inspired by retro 80s video game music. In six months’ time we probably got the foundation for enough songs where we said, ‘Lets stop making songs and start refining them.’ It took lots of passes of really thinning out the material to get it back to that core sound that we were trying to achieve.”

“We tried to keep it lean in the beginning, but that’s not what we’re good at—we’re good at going crazy.”

Although the sound of the album has a foot in the NES/Atari heyday of waveform music, nostalgia is brilliantly challenged in songs such as “On the Third Plane”, where the attack and ability of bass synth voices are something 20th century gaming systems could have never produced.

The inclusion of gaming-idiomatic loops with newer-sounding instrumentals creates a melange of retro and impossibly futuristic noises worthy of the Burdine and Stopschinksi’s 0MEGAVISION — a game console that never happened.

What separates “Omikronian” from other 8-bit inspired groups and albums is its inclusion of a player “performance” element in its pieces. As important as the composed material, nearly all of the songs include musical sound effects that would occur while playing an actual game, such as the character Pants Fad earning points, jumping, or dying.

The game sounds were curated by Stopschinski and Burdine, and added by their Brown Whörnet bandmate Tyler Harwood. These sounds are layered over the main score of the piece to create sporadic but surprisingly harmonious noise.

“Sometimes in opera there’s violins playing the main melody and the singers doing sort of a coloratura freeform on top,” says Stopschinski.

“While you’re playing a game, you’re not just in rhythm and finding all the cool space to do an action: you’re just doing actions. We wanted that randomness as well, that non-sculpted quality, to be the very top layer. I think that was best done by outsourcing it, because Jimmy and I had such a deep knowledge of what the songs sounded like.”

After receiving Harwood’s contributions, 0MEGAVIS0N whittled down the material to fit the whole of the piece and album. “Like with Brown Whörnet, I don’t think anything is overly premeditated—it’s more ‘Let’s just start recording and see what happens’,” says Burdine.

“When we gave it to Tyler we were very loose, but we would say here’s 3 sounds for you to use if you want, and then here’s a 4th sound you can use and you can also use some of your others… He would give us the files, and then we would continue with our Brown Whörnet-style of editing and sculpting and refining [until] we were satisfied.”

In creating a plane of player sounds for each piece, 0MEGAVIS0N delivers both the aesthetic design of a musical composition and an aural recreation of the real-time skill (and even panic) of playing a video game. During Omikronian’s finale, “Pants Fad Departs”,  the game sounds are aggressively executed alongside  spiraling and growing thematic material, creating a cascading event reminiscent of the most dry-mouthed, sweat-caked-controller experience.

“Omnikronian” is classic, yet experimental; chaotic, yet beautiful. It’s both a brilliantly designed reminiscence of gaming and an unpredictable musical performance piece. Although 8-bit influenced projects can fall into sentimental tropes, “Omnikronian” adds originality and bite to the sweetness of gaming nostalgia.

“All music was our influence, good and bad, so this was just infused in our DNA and came out naturally,” Burdine says.

Stopschinksi reasons that “we had fun of playing those games, and the memory of that fun while we were making the album. When I listen to it, I can hear all that.”

“Some of our other music is really intense and noisy and grindy, but this really comes across as, I don’t know… happy!”

Nathan Felix pivots the release of a new opera to digital, and finds new audiences

Back for Black Friday — Grageriart’s “Design 4 Everyone”

With “Design for Everyone,” Grageriart adds to its shopping cart