At Malvern Books, it’s books first. That makes it radical.

For Malven Books founder Joe W. Bratcher III, it's about carrying small press and independent press books not carried in other stores 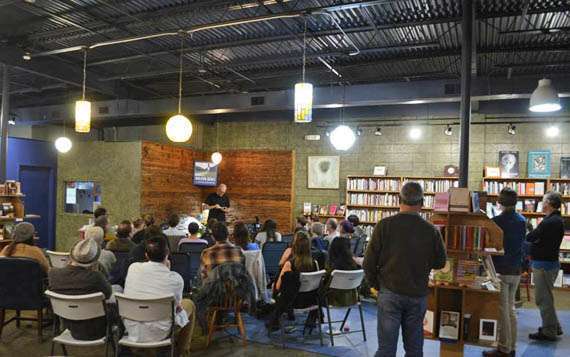 Given poetry’s relatively niche audience compared to the latest bestsellers or home and gardening books, the notion of operating a poetry bookstore might seem like an unusual idea.  However Joe W. Bratcher III is doing something very close to that with his store Malvern Books in Austin.

Opened in October 2013, Malvern Books is a small press-only bookstore devoted entirely to literature (both fiction and poetry), with a huge selection of works in translation. Not far from the University of Texas campus, the store also hosts many lit-related events( book launches, poetry open mics, etc.) and functions as a community space for book lovers and writers of all kinds.

Malvern is not Bratcher’s first foray into independent literature. In 1988, Bratcher — who grew up in Austin and got a PhD in English at UT — founded Host publications a publishing house devoted to bringing primarily lesser-known international works into print in English, many for the first time.

I sat down with Bratcher recently for a conversation about Malvern, Host, small presses, and all things literature. He is gracious, affable, and knowledgeable. Our full conversation follows.

Sightlines: What is the mission of Malvern Books?
Joe Bratcher: To expose people and provide a community and a service to people who wanted literature that was available, but not generally in brick-and-mortar bookstores, books that you would have to order or go online or be at the book fair or something like that to see. I decided that I would open a store where small, independent press books, literature (literature being poetry and fiction), were gathered together under one roof and people could come in and hold the books and see them and compare them and just see what’s available. And it was my hope that there would be an interest. You never know.

S: How has it been? How’s the interest been?
J.B.: It’s been surprising. I’ve been really pleased… I thought for a long time that except for when we would have events, the store would be empty, and no one would be interested in anything like that. But it’s surprised me that people are interested in the smaller press books, both fiction and poetry. And it’s continuing to grow, and you know I’m just really pleased with that of course. S: Yeah, I’m a geek for this stuff. Five or six years ago, I read “Savage Detectives” and Bolaño is constantly referencing these obscure poets, and I wrote them all down. And then I started looking for their stuff, and this is the kind of place for people who do that.
J.B.: Exactly. If they’ve been translated, we try to have them in stock.

S: What’s going on with Host Publications these days?
J.B.: Host is something that started in 1988 and I ran for a long time and right now I’m not producing new books. I do have something online —in the next 6 or 8 months we will be publishing an anthology of the “I Scream Social” readings that we’ve had here at the store. But besides that I really haven’t done much publishing since 2011 which is when I moved back down to Austin from New York City. At that time, I thought that I could run a bookstore and a publishing company simultaneously. I had no idea that that would be impossible, at least for me. And so the books from Host Publications are all still available, I still market the books mildly and you can still buy them.

S: How long were you in New York?
J.B.: I was in New York from 1995 until 2011. I taught at City College for a while, as well as running Host. When I was in New York, about 2006 or 2007, I started realizing that I was enjoying being at book fairs, selling all the books and dealing with people more than I was enjoying copy editing, proofing, and producing books and marketing books. I really was more interested, at that time in my life, in selling books, selling large numbers of books — books that I had not produced.  Like, with Host Publications, at our largest production, we were producing four to five books a year, and a journal or two a year, and the idea of being able to have hundreds of titles, thousands of titles in a bookstore and be able to market those and put those in people’s hands began to really excite me. But I knew that would never happen in New York City. I would never venture something like this there, it’s just too expensive. And so, when I moved back down to Austin in 2011, I thought, “This is my chance” – I can kind of massage my way out of doing so much with Host and open a bookstore. That was my plan. I guess it took about two years to put it together and open the store.

“I like the literature here. I like virtually everything I carry in the store and I want to share that with people. I want them to become curious.”

S: You have a commitment to poetry that is increasingly rare in our culture, in American contemporary culture. Tell me about this commitment.
J.B.: When I opened the bookstore, I knew that I had to be different. I couldn’t compete with Barnes and Noble and Bookpeople. So I had to be different and so I thought one way to do that was to carry the small press and independent press things that are not carried in the other stores. Most of what’s published in small presses and Independent presses is poetry – that’s what I published for a long time, a lot of poetry. And so I knew that world and I knew that it was really underrepresented and it was my hope, again, like I said when I first started, that I could have a store that was 50% fiction and 50% poetry and then maybe divide those into half and half between books originally in English and books in translation. And it’s really worked out because people come to the store and they see all the poetry and see all the things in translation and they’re just surprised because it’s available and that there’s such a wide selection. I just feel that there was a need for it, because it wasn’t really available anywhere else. It’s very high quality, and in my opinion it should and needs to be read and disseminated — that was part of my feeling in opening the store.

S: Yeah – I’ve discovered things myself just browsing here because it’s not like a library where they have hundreds of thousands of books – the focus is narrower, so I’m able to I find things that I wouldn’t normally – Serbian poet Novica Tadic is a great example – that I never would have found outside of a place like Malvern that focuses on that type of thing. So it’s effective…Do you feel like the store is a museum, or is this literature a living thing? Who carries the torch for the Dadaists, Surrealists and others who populate the shelves here?
J.B.: I just go to the nature of books themselves; I thought for a while that I was going to be opening a “retro” store, like a vinyl record shop, but that has not been the case. Young people, especially people who read poetry and read small press fiction, like to have the (physical) books, and fortunately or unfortunately a lot of it is not available electronically yet. Poetry and literature are part of our culture, part of world culture that should not be allowed to disappear, and you know, if I can do something about that, keeping a little spark alive by having poetry readings here and having books available that might interest people, then that’s what I want to do. I like the literature here. I like virtually everything I carry in the store and I want to share that with people. I want them to become curious. S: That’s great – it’s admirable, vital and necessary. Reading any contemporary stuff lately?
J.B.: What I’m really digging into and discovering lately is the New York Review of Books titles – they’re amazing. Right now I’m reading a book about “Greece” by Patrick Leigh Fermor, who was one of the great travel writers of the mid-twentieth century…”Cassandra at the Wedding” by Dorothy Baker is another. When I first opened the store, I knew presses because I’d been in the business for so long. I would just go to a press, and I would trust them, and I’d buy everything they published, because small presses, you’re talking 12 books, 15 books.

S: Like punk rock record labels.
J.B.: Yeah, that’s it. Because, I know they publish this kind of stuff, it’s good, so I want it all. It’s just a blessing to be able to choose only literature — fiction and poetry. I don’t have to worry about finding gardening books, finding political science books, finding all these kinds of things. I can focus on fiction and poetry. It’s amazing the Latin American poets I’m discovering. It’s opened up a whole world for me.

S: Let’s see, I have these silly questions here, you can answer them or not: Who are your top five or ten favorite writers (fiction, poetry, whatever)? What are your top five or ten favorite books (fiction, poetry, whatever)? And if you could have dinner with any writer or poet living or dead, who would it be and why?
J.B.: I was thinking about those questions and I had all these answers, and I was amazed that… well, all of my employees would think of me as very, um, male-oriented (laughs). But I’m from a generation where that’s all you read. I go to Dostoevsky, Joyce, the Irish writer Flann O’Brien, people like that…Virginia Woolf, Sylvia Townsend Warner, I love their works. I would say the person I’d like to have dinner with more than anybody else would be Homer.

S: Good answer…
J.B.: It would be like, OK, tell me a story, right? Just out of curiosity to see how that worked and to hear him. Are there are people in the group(with Homer) saying “No, no, no, it doesn’t go that way”…That whole oral tradition of the story, you know, that would be a wonderful dinner to have.

S: Certainly. That’s a great answer, I definitely wouldn’t have thought that far back.
J.B.: Yeah. You know, people ask me who my favorite authors are and things like that, but it changes, it varies. It depends on the weather outside, it depends on what mood I’m in. Sometimes, I have to read Dostoevsky, and sometimes I can’t stomach the idea of reading Dostoevsky. One of the things that’s so fun about the store is discovering new things and I’m doing that all the time, which is just great.

Nathan Singletonhttp://thesideshowtragedy.com
Nathan Singleton is a writer and musician living in Austin, Texas. "The View From Nowhere, "his most recent record as one half of the avant-blues duo The Sideshow Tragedy, is available in Europe on Dixiefrog Records. He is a regular contributor to Kirkus Reviews and Pyragraph.com.