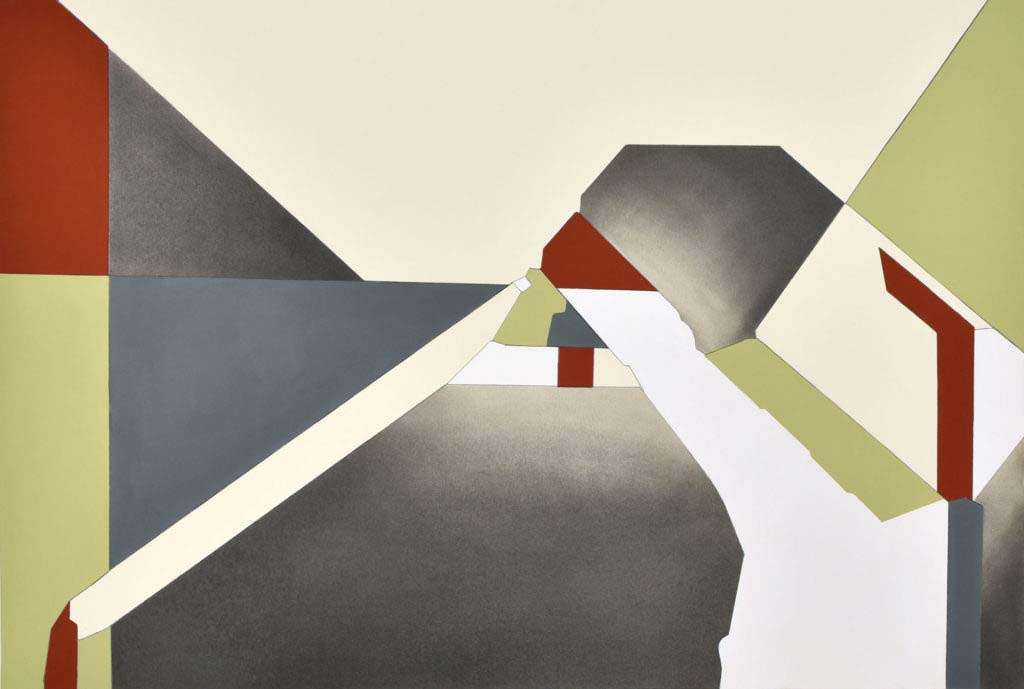 Rebecca Rothfus Harrell kept her fascination with minerals and crystals somewhat a secret before she began creating a now years-long series of paintings.

“I’ve always been intrigued by minerals but I didn’t really tell anyone how deep that interest was,” says the Austin-based artist.

First time viewers of Harrell’s mixed media paintings often puzzle over what the images represent. Futuristic or sci-fi architecture? Abstracted and stylized landscapes? Or perhaps they are purely abstract studies in form and line and space?

The answer might just well be ‘all of the above.’

“You don’t have to know that [this series] is based on minerals,” she says. “Some people see landscapes; some people see futuristic architecture. One person mentioned they thought I was painting Mayan ruins. ‘Abstracted landscapes’ is the term I start with when I explain my paintings.”

The material for Harrell’s paintings debuted in Atlas comes from Victor Goldschmidt and his massive nine-volume Atlas der Krystallformen (Atlas of Crystal Formations) published in 1913. The German mineralogist documented a breathtaking 23,000 different minerals in diagrams to illustrate the geometry of the crystal formations.

Born and raised in Pittsburgh, Harrell enjoyed a childhood of visiting the city’s renowned cultural institutions. With the Carnegie museums of art and natural history sharing the same campus, exploring art and science was little differentiated for Harrell.

“When our family said, ‘let’s go to the museum’ it could mean looking at art or looking at natural history collections,” says Harrell. “It was a very organic approach to looking and learning—we didn’t necessarily separate art from science.”

“I loved the mineral and crystal collection at the Carnegie Museum of Natural History,” she recalls. “I saw each little crystal formation as an amazing little world, and I would image you could walk into them and then you’d be in a whole other universe.”

As an undergraduate at the School of the Art Institute of Chicago and later as a graduate student at the Museum of Fine Arts/Tufts University, Harrell gained a deep interest in the Precisionist style that emerged in the United States in 1920s and 1930s. Painters such as Charles Demuth celebrated the then-emerging, American-built environment of telephone towers, skyscrapers, bridges and factories. The Precisionists blended stylistic aspects of both Cubism and Realism and they typically used a limited color palette and employed a hard-edged approach to line and form, with precise and sharply defined geometrical forms.

At the beginning of her professional practice, Harrell’s made a very 21st-century riff on the Prescionist’s celebration of the industrial landscape focused on the cell phone towers that proliferate across the landscape. In paintings and paper-based collages, she combined precise graphite drawn lines and meticulous shapes painted in matte gouache, creating pictures that simultaneously celebrated and questioned the ever-evolving landscape as technology put its imprint on the natural world—the ultimately surreal quality of how the natural and the human-made are in constant tension in our environment.

Systematic and thorough, Harrell explored cell towers in various painting series for several years before turning to mineral and crystal formations as her subject matter.

“When our family said, ‘let’s go to the museum’ it could mean looking at art or looking at natural history collections,” says Harrell. “It was a very organic approach to looking and learning—we didn’t necessarily separate art from science.”

During a residency at the Vermont Studio Center in March 2017, Harrell embarked on her Atlas series, interpreting Goldschmidt’s mineral diagrams one at a time. Each picture is named according to Goldschmidt’s German-language taxonomy: Turmalin 339, Tridymit 43, Zinkblende 75 for example.

With her Atlas series Harrell also began using Flashe paint, a type of vinyl paint originally used by animators that is very matte, with a velvet-like opacity. The paint adds an accentuated element of flatness to Harrell’s already hyper-flat picture plane.

“Goldschmidt’s goal was to find the mathematics for every angle inside each crystal—the interfacial angles that distinctly define the form of a particular mineral,” says Harrell. “I’m intrigued by something similar—I’m curious about naturally occurring forms that seem as though they’re engineered and actually foreign to nature.”

Harrell seeks a tension of perception then: Is this picture something small depicted large or something large depicted small? Is that line the edge of an object or the beginning of a horizon?

In the end, Harrell’s body of work is very much rooted in the tradition of landscape paintings. It’s just that you might not know at first what type of landscape she has painted. Her deft play with scale creates an image that is simultaneously microscopic and macroscopic.