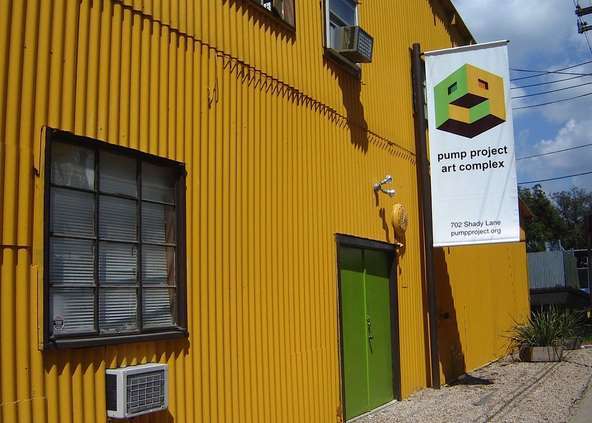 After 12 years of providing artists with affordable studio space, Pump Project Art Complex is losing its lease on the distinctive yellow warehouse in East Austin.

Joshua Green, director of the non-profit Pump Project organization, announced the news today on social media. Green said the property’s owner has opted not to renew the organization’s lease.

Pump Project is one of Austin’s few artist-run organizations to offer low-cost studio facilities and exhibition space. It is home to the studios of 40 artists and artisans as well as two galleries: Pump Project’s own and the Icosa Collective, a 20-member group of artists.

“We’re losing all our arts spaces in this town,” said Green. “It’s got to stop.”

The property’s owner has told Pump Project that he plans to list the property for $2.4 million, Green said. According to Travis Central Appraisal District public records, the property has a current appraisal value of $950,000 with annual taxes of just over $21,000.

Pump Project began in 2005 when Green and others leased the 20,000-square-foot wood-beamed 1950s warehouse on Shady Lane off East Seventh St., carving out two-stories of studios. But since the end of 2015 the organization has struggled to make updates to the building after city officials cited several code violations.

Pump Project had secured pro-bono architectural service to make the improvements which total about $50,000. And the organization had received a $41,000 grant from the city of Austin’s Art Space Assistance Program, a program developed in response to the Austin Music & Creative Ecosystem Omnibus Resolution which identified affordable space for artists as a priority area of concern. In mid-October, Pump Project received the necessary building permits to begin the updates.

But the city grant comes with the requirement that Pump Project have a three-year lease, which it does not.

The news comes in the middle of the East Austin Studio Tour, Austin’s largest arts event during which Pump Project is one of the most popular destinations.

Pump Project’s demise is just the latest in what is becoming a continuing stream of arts groups losing venues and affordable work spaces. Two years ago, artists were priced out of another popular studio hub — Art Post — when new owners raised rents by more than 100 percent.

Theatre collective the Rude Mechs lost the Off-Center, their home of 16 years and one of the first indie theater venues to emerge East Austin, when the University of Texas, the owners of the property, opted to re-develop it.

And last year, after new owners demanded a four-fold rent increase, Salvage Vanguard Theater lost the two-venue building on Manor Road it managed for a decade.

With each lost venue, the crisis ricochets down to the dozens of small and mid-size arts groups that for years played the stages of The Off Center and SVT or used the galleries at Pump Project. Also, informal performance and event sites in East Austin have shuttered as code enforcement officers crack down in an area of the city that has seen a stupefying level of rapid gentrification.

Salvage Vanguard is no longer actively seeking a venue of its own. The Rude Mechs are currently sub-letting rehearsal space in the empty warehouses of the Austin American-Statesman. And the “Texas Biennial 2017” was staged in the back warehouse of a furniture showroom in South Austin.