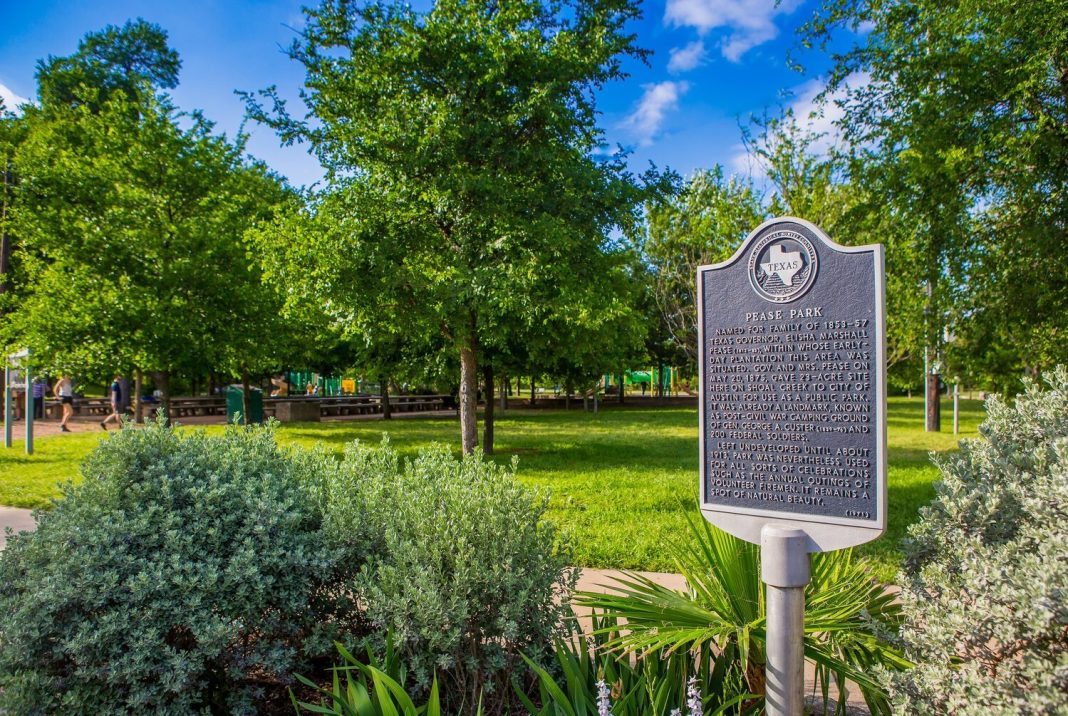 Pease Park Conservancy recently unveiled its new interpretive master plan. While the concept of an interpretive plan may sound vague and slippery — “why does a park need to be interpreted?” — it’s actually a vital document that couldn’t be more timely as cultural organizations are now held accountable for how they address social and racial equity.

Established in 1875, the 84-acre Pease Park is one of Austin’s first public parks. And while its fondly known for Eeyore’s Birthday, the funky free-for-all held since the 1970s, Pease Park actually has a fraught history with enslavement.

The park is named for Elijah Pease, who twice served as governor of Texas and who deeded 23 acres of his property along Shoal Creek to the city of Austin for use as a park. However, those 23 acres were just a small parcel of Pease’s 365-acre Woodlawn plantation on which Pease enslaved Black people.

Now, after 18 months and at a cost of $32,000, the 93-page interpretive offers Pease Park Conservancy a meaningful first step in addressing the park’s history along with community-sourced ideas for how to honor previously untold histories and make antiracism a top priority.

Indeed it’s interpretive plan puts Pease Park Conservancy far ahead of many cultural organizations who have lately rushed to release statements in support of the Black Lives Matter movement, while grappling with their own complacencies with white supremacy.

Heath Riddles-Sanchez, the conservancy’s CEO, says that acknowledging the park’s difficult history has to be the first step in making it a welcoming place.

“Every decision that we make at the conservancy is considered through the lens of ‘how is this going to make this park feel more safe, more welcoming, more accessible for all of the people that the park is meant to serve?’,” he says. “I don’t think there’s a more singularly important step we could have taken than to have invested, both financially and spiritually, in the development of this interpretive plan.”

Pease Park’s very location is complex, ecologically and culturally, Riddles-Sanchez says. Shoal Creek, an 11-mile creek which flows from North Austin to Lady Bird Lake, meanders through the park, and it’s been the cause of some of the city’s most destructive floods. The Balcones Fault cuts through the park too, a dramatic geological marker of east meeting west. Limestone cliffs line the park’s west side where the park borders one of the wealthiest zip codes in Austin. To the east is the University of Texas’ student-filled West Campus neighborhood. Pease is a valuable green space for not only the neighboring affluent community, but also for university students and the entire Austin community.

The park also borders Clarksville, originally a settlement of people enslaved by Gov. Pease. After emancipation, Pease sold some land to those he had enslaved who in turn created one of Austin’s freedman communities. In fact, Clarksville is the oldest surviving freedman town west of the Mississippi River. (While it is widely understood East Austin has a rich Black community history, many are unaware of the history of Black communities living West of I-35 before the 1928 Master Plan which relegated African-American communities to the east side.)

Riddles-Sanchez, who has been in his role at the conservancy for a little over two years, realized the importance of developing an interpretive plan early on, noting the park’s history with enslavement hadn’t been discussed much by the conservancy in the past.

A relatively young organization, Pease Park Conservancy was founded 2010. But it was a transformative $9.7 million grant from Moody Foundation in 2017 that kicked-started work on the park’s renovation in to high gear. Now underway is a major overhaul of the park’s Kingsbury Commons, the park’s main activity area and its south entrance.

Considered part of the park’s master plan, the interpretive plan will not only help inform future design and construction changes, but also the park’s public programming. For Riddles-Sanchez, a huge part of the process was ensuring that the right people were included.

The conservancy partnered with MuseWork, an exhibition planning and design company that has previously worked with, among others, the Colorado River Alliance, Texas Parks and Wildlife and the Texas Historical Commission. Next the conservancy hired Stephanie Lang as a consultant. Lang is the founder of RECLAIM, an organization that works to uncover and showcase histories of Black people throughout the diaspora. She is also director of equity and community Engagement at UT’s Center for Community Engagement.

Lang’s family has been in Austin for generations, and consulting on the project was just as much a part of her professional journey as her personal journey, she says.

“My roots go far in Clarksville to the beginning. For me, this work is important. It’s definitely connected to my own journey and learning about my family,” says Lang. “As I helped with this project, I learned even more about my family’s history.”

Lang’s primary role in the plan was to engage members of Austin’s African-American community which she did via individual interviews and in larger group discussions hosted at Sweet Home Missionary Baptist Church in Clarksville. In addition to talking about the history of the park, Lang also explored contemporary issues such as whether or not Black Austinites felt welcome in the park and how the conservancy could engage the Black community. Lang says participants were excited to help the project and very willing to give their ideas and thoughts, which surprised her.

“I think it speaks to the fact that this does not happen a lot where people from the Black community are engaged in this way. It doesn’t happen enough,” says Lang.

Initially Lang was concerned that once people learned about the park’s history with enslavement they would be less likely to want to participate in the discussions. But surprisingly that was not the case.

“Instead, knowing this history made many of the people I talked to feel more connected to the park and more interested in spending time in the park,” says Lang. “For many they said they were going to make an effort to go to the park more because of that history.”

Riddles-Sanchez says when it came to the community engagement aspect of the plan, he wanted to overdeliver. They had conversations in the form of surveys, digital programs and  in-person meetings at the Clarksville church. Conservancy staff were there to listen and learn with an open mind not be too invested in any specific outcomes, says Riddles-Sanchez.

“We learned that if we want to hear from a specific community, if we want that perspective, it’s on us to go to that community. Not to expect them to come to us. We did do a lot of traveling around the city,” says Riddles-Sanchez.

One of the themes that emerged from the community sessions, Riddles-Sanchez says, was the park as an emblem of the racial and economic injustice.

“It was interesting to me that the folks we spoke with certainly wanted the issues of slavery and segregation to be acknowledged, but there was a real sense of wanting to protect the positive, uplifting spirit of this space as a public park,” says Riddles-Sanchez.

Ideas for how to physically incorporate its history into the park for visitors to experience include, among others, a visitor kiosk, a documentary film, and a contemplative space in Kingsbury Commons, the park’s main activity area. There is an existing list of names of enslaved people that were connected to the park — including one of Lang’s ancestors — that could be incorporated into a structure in the park. One possible spot is a low limestone wall, currently under construction, which snakes through Kingsbury Commons, onto which names could be inscribed.

Lang says it will be important for these new constructions to not re-traumatize visitors, focusing on an acknowledgement space that is connected to nature.

“(It needs to be) something that is not going to recreate some type of violence or trauma,” she says. “There is already so much violence and trauma around the history of enslavement so doing this in a way that is a quiet, reflective, honoring space.”

Riddles-Sanchez says future programming will be centered around bringing new people to the park, in addition to emphasizing youth empowerment through ecological education.

“What I would like to see us do programmatically is create opportunities for marginalized or disadvantaged young people to come to the park and learn about the opportunities to have careers in ecology, geology and environmental studies, which are historically very white professions,” Riddles-Sanchez says. “With this park we can empower a whole new generation of people to seek these professions.”

Of course, diversity doesn’t stop with park demographics. It’s also an important component of fundraising, says Riddles-Sanchez. When the conservancy completes the Kingsbury Commons construction project next year, it will assume from the city of Austin responsibility for operating and maintaining the park, a major new expense for the organization. Riddles-Sanchez says they will continue to pursue major gifts, seek smaller level donations from more contributors, and potentially open up the park for rentals.

“We will gain a greater autonomy with how we use the space including the ability to develop earned revenue streams,” says Riddles-Sanchez.

Pease Park Conservancy also has ongoing internal discussions with their staff and board on issues of diversity and inclusion within their organization.

“You don’t want diversity for diversity’s sake. What you want are people at the table at the earliest stages and at the highest levels of a planning process, who are reflective of the demographic that the space is meant to serve,” says Riddles-Sanchez.

Lang points out that continued community engagement will be a key component of ensuring the plan is sustainable. For example, black community members expressed the desire to see Pease Park Conservancy staff participate in Martin Luther King, Jr. Day and Juneteenth celebrations. (The park staff did partake in both celebrations.)

How to engage people impacted by the park will vary depending on the community, and it’s important not to apply a one-size-fits-all approach, Lang says.

“It’s not just this action of going out and being at these events. (It’s about) what from these events and projects can you bring back and weave into the work of Peace Park Conservancy?”

The acknowledgement of the existence of slavery at Pease Park is a first for a public park that is not in East Austin.

(Beginning in the 1870s, Eastwoods Park, just north of the UT campus, was home to the city’s largest Juneteenth/Emancipation Day celebrations. However, after the city’s 1928 master plan officially segregated Austin, Black Austinites were excluded from the park.)

“I think in the past there’s been hesitancy to tell these stories because of how it would look or because of people not feeling comfortable acknowledging the past around enslavement and segregation, and also marginalization and violence,” Lang says. “But these stories need to be told.”

“With everything that’s happening right now in this country, I think this is the time  to tell these stories and to figure out how to unpack and navigate this history and really engage with the communities impacted by this history to move forward.”