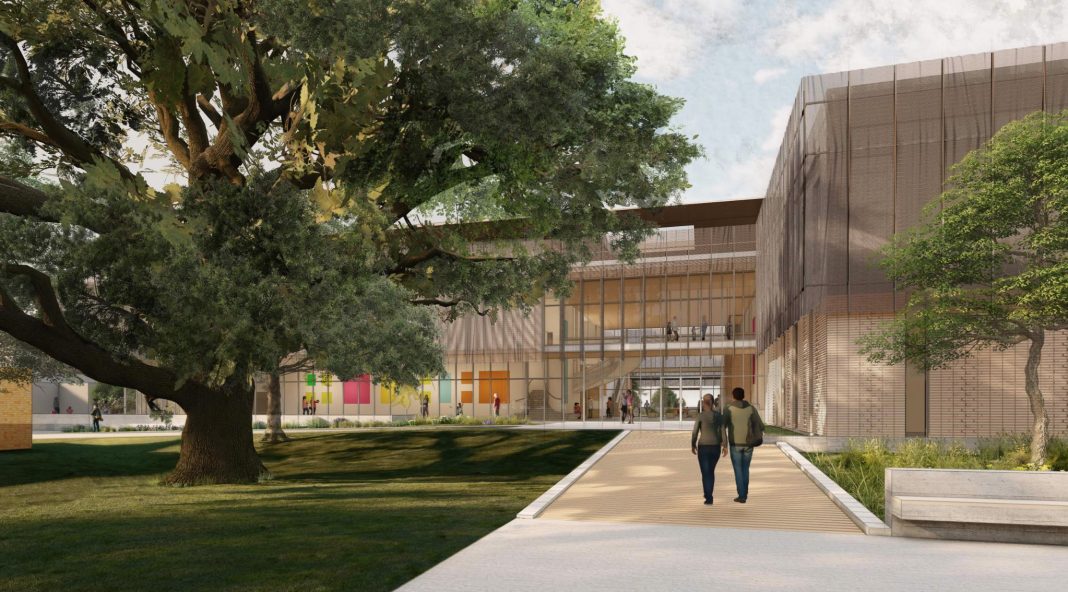 Architects charged with designing the new Dougherty Arts Center unveiled the final plans at an April 25 meeting hosted by the city of Austin’s Parks and Recreation department.

It’s a vast improvement over the existing facility. Currently, the Dougherty Arts Center (DAC) is in 1940s building on Barton Springs Road deemed beyond repair in 2010, its site flood prone.

Austin voters approved $28.5 million in bonds in 2018 for the new art center. And in 2019, city council approved relocating the DAC to city parkland on the south shore of Lady Bird Lake. Known as Butler Shores Park, the site is also home to Zach Theatre and the Parks and Recreation Department headquarters, a mid-century modern structure eligible for listing on the National Register of Historic Places.

Council approved the DAC site layout in 2021. At that time, in a move led by council member Ann Kitchen, council included direction to establish Riverside Drive as the principle public ingress and egress to new DAC, not the narrower Toomey Road which borders the park on its south side.

Plans for the new building call for an underground public parking lot with 137 spaces to be shared by the new DAC and Zach Theatre. It also calls for a drop-off loop on the south-facing side that allows for art school students to enter and exit the building away from the parking garage entrance on the north side of the building.

The new building’s first story is clad in pale brick, an homage, said project lead designer Rick Archer of Overland Partners Architecture, to the site once being home to the Butler Brick Company. A perforated metal screen wraps the second story. While the site’s zoning allows a building height of 96 feet, the architects said they opted to limit the building to 48 feet to keep it in line with the canopy of the trees, many of which are heritage oaks.

The building can be entered from all four sides, each façade having a different quality. Window walls allow for generous views of the park.

Archer emphasized that the light-filled building is designed for “art everywhere” with many places inside and out appropriate for the display of artwork. Likewise the design offers multiple spaces for people to gather informally, whether an inside lounge areas or the courtyards formed by the building’s shape. A two-story space in the building’s center called the Hive functions as a makers’ space, lobby and gathering space. A skybridge spans overhead and connecting second floor areas.

Construction is projected to begin in 2023 with completion by the end of 2024.

As it has since the city decided to build the new DAC on Butler Shores, much of the meeting’s public comment centered on parking capacity and traffic. The congested Lamar Boulevard/Barton Springs Drive area is the main access point for Butler Shores. And both Toomey Road and the stretch of Riverside Drive along Butler Shores Park are narrow two-lane roads.

City staff directed the public to the project’s website to leave further comment. The site also includes links to a video of the presentation and the presentation’s complete image deck.