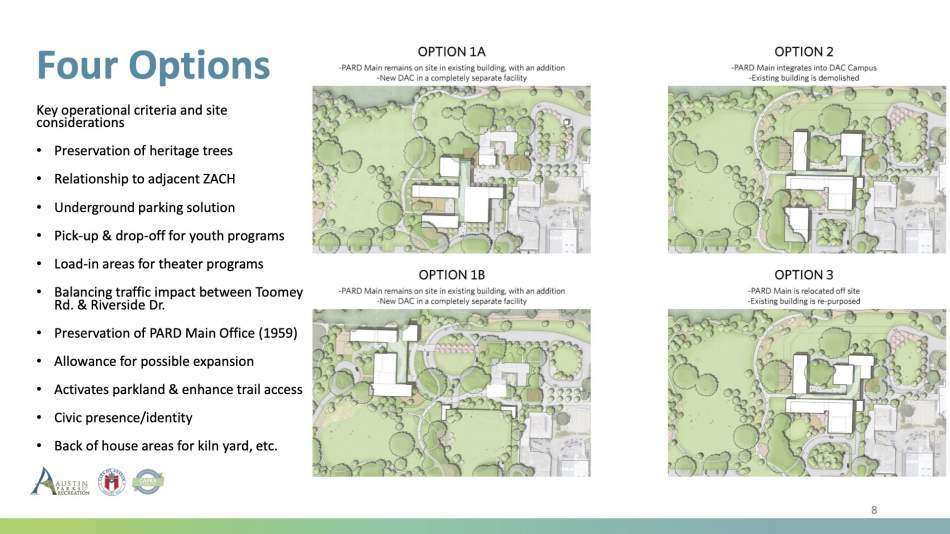 Plans for new Dougherty Arts Center were presented to the Austin arts commission at its March 15 meeting.

The new building for the municipal arts center and community art school will be built on the the city-owned site known as Butler Shores, on the south side of Lady Bird Lake at Lamar Boulevard.

The arts center will share the city-owned site, known as Butler Shores, with Zach Theatre, which was built with $10.8 million of voter-approved city bond money.

Also on the site is the PARD Main Office building, a mid-century modern structure designed by architect R. Earl Dillard that is eligible for listing on the National Register of Historic Places. Two AISD ballfields currently located on the parkland would remain.

Designers have developed four options for the new arts center.

PARD leaders and the designers, Studio8 Architects, favor Option 1-B (see main image above) because of its preservation of the PARD building and its inclusion of a new oval-shaped tree-rimmed grassy plaza along Riverside Drive and the Butler Hike-and-Bike Trail.

A 200-space underground garage parking is also planned and will serve visitors attending the Dougherty Center, Zach Theatre, Butler Shores, and the baseball fields. Much of the existing surface parking along Toomey Road will remain.

Austin voters approved bonds in November 2018 for the $28.5 million needed to relocate and build a new municipal arts center and school.

Built in 1947 as a temporary structure to house a Naval and Marine Reserve Center, the current DAC building was actually due to be razed in 1978 when it was passed on to the city. Situated along Bouldin Creek and built atop a landfill site, the building is prone to regular flooding and well within a floodplain zone. A 2010 study deemed the building beyond repair.

The new plans will be presented to city council on March 25. Construction is slated to begin in fall 2022.