Austin Arts Groups Oppose Propositions A and B

With early voting ending today and the election Nov. 5, Austin arts groups are reminding their audiences to vote — and vote against City of Austin Propositions A and B.

On the ballot are ten state constitutional amendments, one Travis County propositions regarding Hotel Occupancy Tax and two city-based citizen initiatives placed on the ballot by local petition drives: Propositions A and B.

By law, 501c3 nonprofit charitable organizations (including Sightlines) cannot take positions on partisan matters nor endorse political candidates. But organizations can advocate. And numerous arts groups including the Long Center, Ballet Austin, Austin Opera and the Umlauf Sculpture Garden & Museum, have been sending out messages to their audiences and supporters.

Proposition A, initially intended to impact the new Austin FC stadium, would also considerably impact arts organizations and other nonprofits that operate on city-owned land — institutions like the Long Center, the Umlauf Museum, Zach Theatre and Austin YWCA’s, among others. Prop A would require voter approval of any lease of any city property for a sports or entertainment venue, and then require that venue to pay property taxes.

So for example the Long Center — a private non-profit that operates on city property — the approval of Prop A would mean the performing arts center would have to ante up $2.5 million in property taxes each year.

A list of organizations opposing Propositions A and B has been widely circulated. 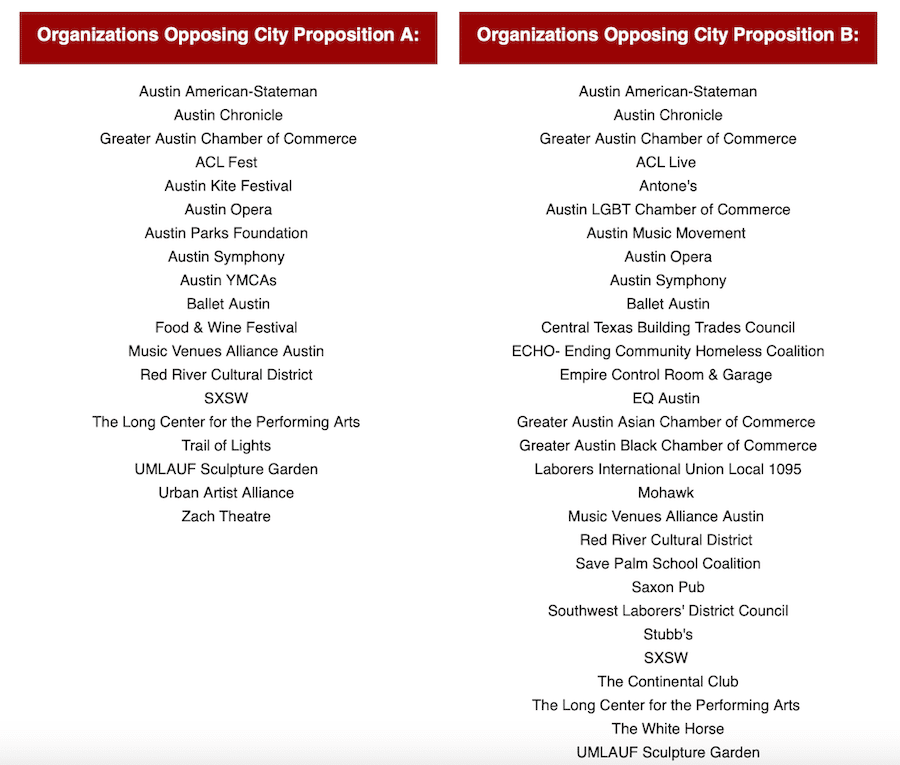 Disclosure: Sightlines is a recipient of City of Austin Cultural Arts funding.