In an operatic song cycle, Graham Reynolds plums the constantly shifting portrait of a much revered hero 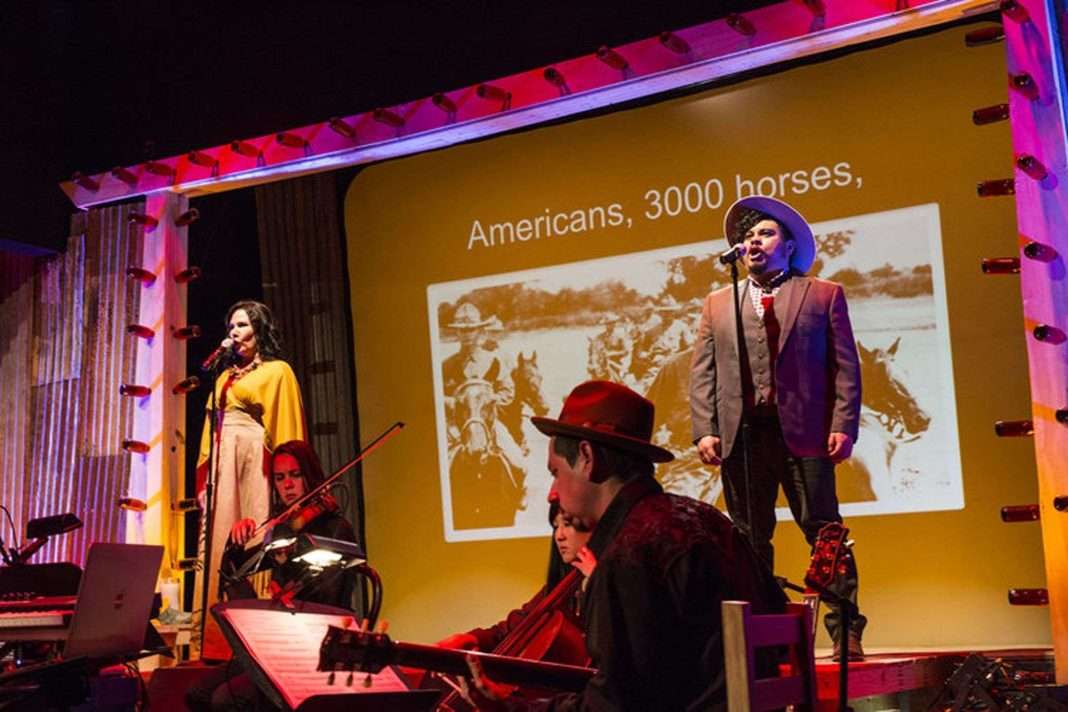 The Mexican Revolutionary bandit-general is ripe for mythologizing, the facts of his life so muddled with the lore that historians have difficulty agreeing on many of the events of Villa’s biography.

It’s that slipperiness between fact and fiction that proved inspiring for Austin composer Graham Reynolds.

“Pancho Villa From a Safe Distance” is Reynold’s effective musical kaleidoscope about the folk hero.

More a song cycle (or rock opera) than the chamber opera its subtitle proclaims, the 80-minute composition is a rollicking mishmash of Mexican corridos, Tejano tunes, American country western — and no small amount of operatic rock. Reynolds leads an ensemble that includes Grammy Award-winning producer Adrian Quesada on guitar, along with violin, cello, bass and tuba.

Vocalists and musicians perform against a montage of film and images, a visual medley that adds another layer to the collage of music and words.

“Pancho Villa From a Safe Distance” is the final installment of Reynold’s “The Marfa Triptych: Three Portraits of West Texas,”  a project commissioned by Ballroom Marfa, it premiered in Nov. 2016.

Austin’s Fusebox Festival presented it in April and earlier this month the show played Los Angeles’ Theatre at Ace Hotel as part LAX Festival. In November, it heads to Seattle where it’s a part of the On the Boards Festival.

“Pancho Villa is a puzzle,” says Reynolds. “He’s iconic and he’s larger-than-life to people on both sides of the border — during his lifetime and beyond.”

It was when Reynolds and his partner and collaborator, director Shawn Sides, traveled to El Paso and stayed at the El Camino Real Hotel that they hit on the inspiration for “Pancho Villa From a Safe Distance.”

Formally known as the Hotel Paso del Norte, the historic hotel is blocks from the Texas-Mexico border with Ciudad Juárez just on the other side of the Rio Grande. In 1911, as the Mexican Revolution raged, the fashionable people of El Paso gathered on the hotel’s rooftop to watch the Battle of Juárez. Warfare became theater to the people on the rooftop, the neighboring city of Juárez suddenly a distant spectacle.

“It really came together for me when we were in El Paso,” says Sides, a co-producing artistic director Austin’s Rude Mechs theater collective. “The mythology around Pancho Villa, how people watched this battle and its violence as if it were some distant happening.”

Indeed the word “distance” in the opera’s title operates on multiple.  We prefer to keep history, with its contradictions and complexities, at a safe distance from our present. Ditto America’s relationship with Mexico, the country south of the border always politically and culturally distanced.

And yet for the Texas-Mexio border region, history and culture are inextricably linked and impossible to disentangle.

Pancho Villa’s birth seems to be one of the few events historians agree on. He was born José Doroteo Arango Arámbula in 1878 to poor sharecropper parents in the Northern Mexico state of Durango.

By the time the Revolution erupted in 1910, he emerged as Pancho Villa, a leader of the rebellion against the 34-year dictatorial rule of Mexican President Porfirio Díaz.

With his army controlling areas near the U.S. border, Villa shrewdly took advantage of the hordes of the reporters and photographers from U.S. newspapers in search of scintillating war coverage. In fact Villa even inked an agreement with Mutual Film giving the newsreel company. He reenacted military incidents, or even staged false ones, in effect theatrically performing his own life for the camera — and for posterity.

Villa remains revered in Mexico today, enormously popular as the hero who helped liberate the country’s poor from the crushing oppression of the vastly powerful hacienda owners.

Reynolds started work on the opera before Donald Trump’s presidential campaign fomented calls for wall along the U.S.-Mexico border.

Yet when “Pancho Villa From a Safe Distance” premiered in Marfa just days after the 2016 presidential election, it suddenly had a new potency.

“I didn’t intend it to be so timely but it is,” says Reynolds. “I wanted a borderless conversation about the shared history between Mexico and Texas.”