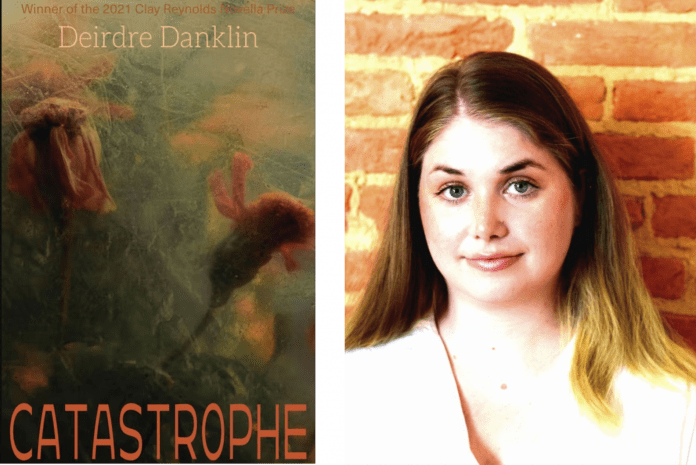 “I dreamed of rain last night.”

So begins “Catastrophe” by Deirdre Danklin (Texas Review Press, 2022), which was awarded the 2021 Clay Reynolds Novella Prize. The Baltimore-based author holds an MFA from Johns Hopkins University, and her work has appeared in The Jellyfish Review, Hobart, and others.

Like dreams, “Catastrophe” is made up of vignettes. Alternating between two points of view, Danklin orchestrates an exquisite unraveling of her characters’ actions, histories, and fears. She knows a world wrecked by climate disaster isn’t hard for readers to imagine and starts the story without any details about how or why rain hasn’t fallen or viruses ravage cities. The two unnamed female characters Danklin alternates between were childhood friends. As children, they performed a ritual: “the safety scissors, your blood in the cut on the palm of my hand.”

This first woman lives in a trailer in a desert where it has been dry for all too long. She lets “a little pulse of light” into a dying gecko, an erstwhile pet of a grieving girl from the nearest town. After the gecko is saved, the girl, Megan, starts to visit more and wants to learn how to read tarot cards and heal things as the woman does. The desert woman instructs Megan to tell people what they want to hear. She explains, “it makes them feel real.”

Although the woman went to the desert to be alone, to escape the noise of being around living things, she enjoys her new friend. Megan picks up the skill of tarot readings but lacks the innate magic of the desert woman, who knows the yearnings of the people who visit her. Yet she still hears the thoughts of her childhood friend.

In the nearby town, a preacher flourishes, providing alcoholic salves for Megan’s mother while he ministers to his congregation. The preacher convinces his followers that if it does not rain, they will kill themselves. The congregation pushes the prophesized date into the future again and again. Megan’s mother dies, presumably by alcoholism. It has yet to rain. Then Polly, an ex-girlfriend of the desert woman just as she and Megan are getting ready to leave. To the desert woman, Polly is “a knife stuck in a tree trunk. Danger. Fear fear fear fear.”

This second point of view follows a woman who spends the catastrophe in her late uncle’s cabin in the mountains. She escapes with an entire clan: her parents, sister, brother-in-law, their two boys, her husband, and her baby, everyone reduced simply to their familial roles. Without their names and isolated on the mountaintop, their fear grows magnificently. The mountain woman knows she has privilege in this wrecked world, but, from the comfort her family’s cabin, only superficially questions her advantages. Her wealthy uncle left the family his mountaintop cabin. She wonders where his wealth came from and frets about it as the people at the bottom of the mountain die. She begins to dig through her uncle’s papers, but then just lets it go.

From a radio the family hears news from the cities below: people are dying. Still, the family feels safe. They have plenty of food and take walks on a paved trail. But their sense of security is jolted when a man shows up and asks to camp outside. He claims he knew their uncle.

Fear begins to eat away at the family. The children aren’t allowed to play outside, and everyone become prisoners in their own sanctuary. When the woman realizes the depth her husband’s panic, she observers that he “bent his face down to the eyes of a suffering creature and recoiled at the risk he found staring back.”

Danklin’s prose is forceful in its gravity and piercing in its imagery. The mountain woman stares at the sky trying to reconcile herself with what to do next when her mother shares an insight. “’I bought this necklace even though I didn’t have any money because I knew exactly the kind of life I wanted to have. I had to believe it was possible for me.’ Then she doesn’t say anything else. She takes my hand like I’m still a child, and I feel very small, like a seed of some greater tree.”

Amidst all the trauma and sadness in “Catastrophe,” Danklin makes it clear how human connection is absolutely needed for our survival.