A new documentary, “Boom for Real," examines the late teenage years when the foundations of Basquiat's fame were seeded 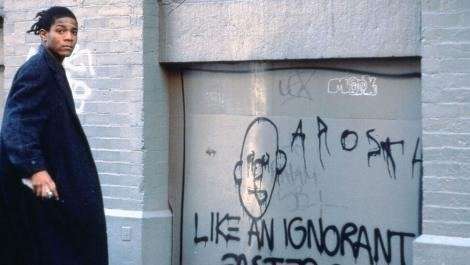 Before his death at age 27; before the heroin addiction, the money, the fame, the gallery exhibits; before the friendship with Andy Warhol; before the Mudd Club and the New York’s downtown scene, Jean-Michel Basquiat was SAMO, a street artist. He was a graffiti writer only in the sense that he sprayed words on walls without permission. Because rather than “going all city” on subway cars and impressing graffiti writers, Basquiat was strictly interested in gaining the attention of the gallery-oriented artists of the new downtown scene south of Houston Street in Manhattan. The tag SAMO (“same old shit”) couldn’t achieve that alone, even with the copyright sign that always accompanied it. So Basquait started adding carefully printed aphorisms, poetic lines, and enigmatic thoughts.

As Sara Driver shows in her new documentary “Boom for Real: The Late Teenager Years of Jean-Michel Basquiat,” the strategy worked and the teenager became the proverbial overnight success.

“Boom For Real” screens May 23 and 27 at Austin Film Society.

Driver herself was very much a part of the No Wave/East Village and downtown arts scene of the late 1970s and early ‘80s, first appearing in Jim Jarmusch’s “Permanent Vacation” (1980) and then producing his 1984 film “Stranger Than Paradise.” (The two remain life partners.) In addition to revealing the late teenage years of Basquiat, Driver also explores the cultural world they both inhabited, alternating archival footage from the late 1970s and early 1980s with newly filmed interviews with Basquiat’s friends, collaborators and lovers.

The economic turmoil that New York City experienced in the 1970s — as President Gerald “Anti-Bailout” Ford infamously said to the city in 1975, “Drop Dead” — gave birth to a punkish DIY philosophy and aesthetic among young artists who could depend only on each other and themselves for performance and exhibit space. It was in this milieu that the young artist from Brooklyn would thrive.

Blessed from the beginning with a melodic name and remarkable parents, Jean-Michel Basquiat — pronounce the “t” only if you do the same for Monet and Chevrolet — was born December 22, 1960 at Brooklyn Hospital. His father Gerard, a well-dressed accountant originally from Haiti, would have three children with his wife Matilde Andradas, who was born in Brooklyn to Puerto Rican parents. The Basquiats lived in Park Slope, Brooklyn, then a primarily working-class neighborhood in transition.

Matilde loved to design clothing and encouraged Jean-Michel to draw whatever he wanted. At first that would be TV cartoon characters. Even before the boy was five, she took him to the major museums of Brooklyn and Manhattan. He was awed by Picasso’s massive work “Guernica,” which was then still housed at the Museum of Modern Art.

Through both parents, the young Basquiat became trilingual and learned to love words, both how they sounded and looked and what hidden suggestions they could hold. Words and letters – even when marked out — would become an essential element of his mature style of painting.

After being struck by a car, Basquiat was hospitalized for a month following the removal of his spleen.  While recuperating, he received a prescient gift from his mother: Gray’s “Anatomy,” which supercharged his fascination with the human figure, tendons, veins, and all, another element of later paintings.

For unknown reasons the Basquiats separated. Perhaps by way of explanation, Matilde was institutionalized with mental problems in 1971. Three years later Gerard took his three children to Puerto Rico for his new job.

Back in Brooklyn by late 1976, the young Basquiat entered the City-As-School High School for gifted/troubled children in Manhattan. There he befriended Al Díaz, a young graffiti writer who lived in the Jacob Riis housing projects. Together they became SAMO by tagging the D-train and spots all around lower Manhattan. Jean-Michel enriched their tag with pithy aphorisms and a copyright sign.

British artist Stan Peskett threw the now infamous Canal Zone party at his 5000-square-foot loft in April 1978, an event that comingled uptown graffiti writers with the slicker downtown artists. At the pary, Basquiat painted a piece signed SAMO and slyly outed himself to a few party-goers, such as graffiti writer Lee Quiñones and the ubiquitous cultural bridge-builder Fred Braithwaite (Fab 5 Freddy).

Abandoning his father’s house with a bit of money and a paternal blessing, Basquiat lived on the street some of the time, but because of his sweet charm he more often crashed in various apartments belonging to new friends. He collaged postcards and even sold one to Andy Warhol by brazenly walking into a SoHo restaurant and showing him a handful.

Beginning at the age of 17, the good-looking, soft-spoken artist charmed a long succession of women older than he. In “Boom for Real” we see a number of those women still eager to talk about their relationship with Jean-Michel, no matter how short or how stormy it eventually became (sometimes because he practiced his art on their walls, floors, furniture, and clothes). There is no doubt that most really loved him.

And their best memories often revolve around being with the teenager at the new downtown clubs, especially the Mudd Club, CBGB, and Club 57. With Jean-Michel the women became part of the ubiquitous downtown 500 (a hipper version of Mrs. Astor’s Gilded Age 400), including Deborah Harry, Chris Stein, David Byrne, Madonna, the B52s, and John Lurie. Basquiat preferred Diego Cortez’s Mudd Club in the TriBeCa neighborhood, and as would happen so often, the older man became a friend and mentor to the young artist. These facilitators are scattered throughout Driver’s documentary.

As the four basic elements of hip-hop (rap, breakdance, graffiti, and record sampling) were being born and nurtured in the South Bronx, and pockets of other boroughs, Jean-Michel realized that people of color were creating vibrant new works. Even though he would not employ a hip-hop style, he fully intended to be an artist on his own terms in the downtown scene, despite the snide stereotyping he would run into.

A December 11, 1978 article in the Village Voice extolled the graffiti work of the still generally unknown SAMO. Sensing success, within a month Basquiat broke off his friendship with his long-time collaborator Díaz, with Basquiat proclaiming on various walls around the city that “SAMO© Is Dead.” In Driver’s documentary Díaz admits that separation made him bitter.

But Basquiat was destined for glory as a world-famous painter — no relationship would stand in his way.

In the succeeding nine years, Basquiat would create more than a thousand  drawings and about 600 paintings, artworks that made him a beacon of possibility for so many young artists, while simultaneously proclaiming the value and contributions of African Americans to culture. He is a giant of the 20th century and Driver’s documentary gives us a good idea of how he came to be.