Cambridge Tower: From celeb to invisible icon and back again

Cambridge Tower debuted with citywide buzz in 1965, then waited decades for a new urban world to catch up with its vision

Long before soaring residential towers raced one another up Austin’s skyline, a beacon of urban modernity years ahead of its time took shape at Lavaca and W. 19th Street (now Martin Luther King, Jr. Blvd.)

Cambridge Towers opened in May 1965 after months of media coverage, tantalizing ads, and hoopla. The 15-floor structure of 169 luxury apartments, built for $4.5 million, was touted as the tallest privately owned building between Houston and Dallas. A ribbon-cutting ceremony with state and local officials offered high tea on the roof garden of its 181-foot splendor.

A point of special pride when Cambridge Tower opened was its plum location between the matrices of Old Austin: the state capitol and the University of Texas. Those two institutions formed the backbone of the city before high tech and shaped its liberal but power-cozy character in ways that still are apparent.

Austin was a sleepier town in 1965. The population was 224,000; UT’s enrollment hadn’t yet been swelled by waves of baby boomers. Interstate 35 had only recently lost its stop light at the railroad crossing near Airport Boulevard, and its upper deck was but a dream, or a nightmare waiting to happen.

A building boom was in progress that spring; even major retail chains were expanding into the capital city: K-Mart, Montgomery Ward, Safeway, U-Totem and Walgreens. And if the little city felt it was ready for high-rise living, Dallas developers were happy to oblige. 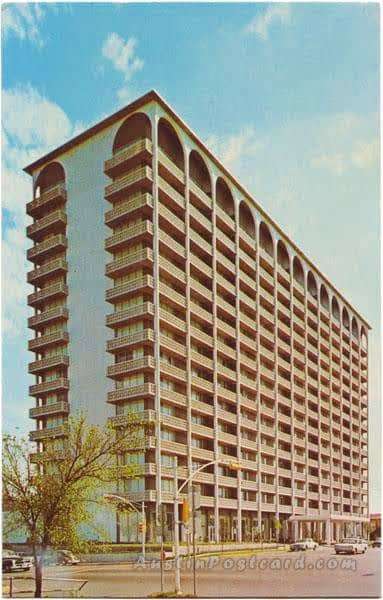 After a non-starter proposal from developer L.L. McCandless, Dallas’s Mayflower Investments took over the project with a design by architect Thomas E. Stanley II, whose firm was named by Time magazine as one of the country’s best and largest. Stanley’s grand life story, often self-embellished, was one of rags to riches to rags.

An orphaned farm boy who rose to professional and social prominence in postwar Texas, he flew to meetings in a private jet emblazoned with a made-up family coat of arms. After losing it all on real estate speculation in the 80s, Stanley ended his days with his dazzling socialite wife in a cramped apartment — their stored possessions allegedly stolen by their heroin addict daughter and sold to her well-heeled stepsister, the family embroiled in bitter lawsuits.

But Stanley’s star was still rising in 1965, with commissions for bank and office towers across the U.S., as well as iconic Dallas buildings like the Lovers Lane Methodist Church and his chic downtown Sanger Harris department store. Developers sought him out for his practical economy, elevated by classical flourishes — white marble, arches, columns— on modern spaces.

Stanley’s New Formalist façade for Cambridge Towers features horizontal bands of concrete brick overlaid by gracefully thin neo-classical arches. Most notable are the pierced concrete blocks in shape-shifting geometric designs that form the balcony balustrades to create a brise soliel (sun shade) effect, a hallmark of the New Formalist style. All apartments opened via sliding aluminum doors to these Mediterranean-inspired balconies which in 1965 provided unobstructed views in every direction.

Units varied from one-room studios to three-bedroom suites, with posh floorplans dubbed the Viceroy, Envoy, Consul, Attache, Minister, Ambassador and Chancellor. Kitchens were small by design, since the complex included restaurants on the ground flor, as well as retail shops and services, and elegant reception areas like the London Bridge room for tenants’ use.

A rooftop garden and lounge, a fallout shelter, underground parking, and an exotic Mediterranean cabana and pool completed the complex. Every need was addressed, every desire at hand.

Eschewing the oversized suburban lawns and sprawling ranch houses of the day, such carefree living was a novel idea in these parts. Cambridge Tower was pitched to those who had lived large and now wanted to live luxuriously, and conveniently. Children weren’t barred, but management didn’t encourage them due to “risk of falling.”

The complex didn’t seek to attract students, either, despite being next-door neighbors. The general manager said in an Austin Statesman interview that he hoped the apartments would appeal to “professors and administrative personnel” at UT. In similar Daily Texan coverage he included married and graduate students. Undergraduates need not apply, a gossip column snarked.

Whether as an olive branch to the campus or because funds were running short, the Cambridge Tower management announced competitions for UT students to participate in the project.

Another contest was launched to coeds to design a doorman’s uniform for the 24-hour manned entry — “just a simple pencil sketch of any sort,” indicating colors and suggested fabrics. The winner would receive a ladies spring wardrobe and one year’s use of the pool.

Newspaper archives don’t reveal the winner of either contest.

The Cambridge Tower Beauty Salon advertised the services of a thinly mustached Mr. Page, “who cordially invites his old friends and customers to visit him,” and of the boyishly blonde Mr. Pierre Duerinckx of Belgium, “originator for Barbara [sic] Streisand . . . has worked in the finest salons in 17 states, speaks 5 languages.” Texas must have agreed with Mr. Pierre, legally Henri. His obituary reports he died in Llano in 2006 where he’d married a local woman late in life, but pointedly mentions his 19-year friendship with a Bill Wilson.

The Statesman carried a news brief with photo promoting the grand opening of the cleverly named The Sharpes, a fine apparel store established by former Mason school superintendent E.R. Sharpe and his wife, who relocated to the big city post-retirement  walking testimony to the Cambridge vision. Mrs. Sharpe wore a “champagne-colored gown banded in ranch mink” for the ceremony, which included a blessing of the shop by a reverend.

One of the major selling points was the convenience of in-house dining. The informal Cup and Saucer, a typical coffee shop design kept on-theme with the display of British knickknacks, served breakfast and lunch and provided room service. The fancy lunch dinner option was Table Royal, boasting wood-paneled private dining alcoves “patterned after a monk’s cell.” Its tall windows overlooked the pool.

Both were overseen by established local restauranteurs Mr. and Mrs. Chester Koock, owners of the southside landmark Green Pastures (now Mattie’s). Table Royal advertised the “exclusive” recipes of manager Mrs. Jennieve Cundieff, pictured tableside in ads in a smart Mary Quant Chelsea-look dress. A dishy columnist for the Statesman reported in April 1966 she was still fiercely guarding the secret ingredients of her Millionaire’s pie. Cundieff died of a brain hemorrhage one month later, and the search for a new manager was local news.

Table Royal’s most enduring culinary contribution to the city seems to be a chocolate silk pie, later served by Wylie’s on Sixth Street, the recipe for which was time and again sought from Ellie Rucker, the iconic consumer columnist who tracked down local lore and hard to find items. “Before there was Google, there was Ellie Rucker,” the Austin Chronicle said of her passing in 2013.

Such stories evoke an Austin that was still a small town not only in terms of who knew whom, but in terms of its entrepreneurship and scale. That homegrown identity feels at odds against the urban aspirations of the self-proclaimed “Landmark of Luxury,” which may explain its early failure to thrive.

Cambridge’s distinction as the city’s only high-rise apartment building was soon vanquished by the 25-story Westgate Tower just two blocks and two years down the road. (In fairness, Westgate’s New Formalist brise soliel design was already finalized before Cambridge, though its construction hadn’t begun.)

As the 60s ended, Westgate’s brown Butler brick facing seemed somehow more in step with the coming earth-toned 70s, and its rooftop La Tour was among Austin’s toniest restaurants in its day, even if it took some guff from the local food critic for its tuxedoed waiters and “predatory” wine list.

Without uncovering occupancy records, its plain to see that by the early 70s, the full vision wasn’t panning out. Notices of stylists and boutiques gave way to a barrage of ads in the Statesman and UT’s Daily Texan for free information sessions for the Evelyn Wood Speed Reading Institute, and for ESP seminars with the Southwest Motivation Center held in those Olde English named meeting rooms.

It’s not clear when the original restaurants of Cambridge Tower shuttered. For Thanksgiving 1967, Table Royal was still offering a buffet. In 1969 and 1970 the plain-named Cambridge Tower restaurant advertised prime rib and ample parking. In late 1972 a cartoon monk image heralded the Cambridge Abby, serving 39-cent cocktails with the prime rib, and “little to no parking, so take a cab, it’s worth it.”

Soon the Cambridge Tower went condo. An aggressive advertising campaign in the late 70s and early 80s boasted of attractive 10% and 11% interest rates for buyers of the former rental units. A first phase condo conversion allowed existing occupants to purchase; later phases opened sales to the general public. Some units were made larger by combining smaller ones, but the opportunity was mostly horizontal; only a few apartment layouts allowed for vertical expansion.

Restaurants continued to drift in and out.  In 1978 a Statesman columnist wisecracked, “who else showed up for lunch at Cambridge Tower last week and found the doors locked?” During the condo phase in 1979, Austin restauranteur Bob Lowe started up 1800, where a Texas Monthly reviewer noted with relief the disappearance of pseudo-Tudor touches. Patricia Bauer-Slate (of Sweetish Hill Bakery), attempted the lovely upscale La Provence there in the mid-80s, but it too was doomed by zero street visibility.

With its style waning in popularity and the revival of midcentury modern still decades away, Cambridge wasn’t a particularly fashionable building for a time, and many thought of it as an unofficial retirement island in the parking lot and office building riddled no-man’s land between downtown and UT.

Still, the landmark of luxury weathered the years and kept its cool — an invisible icon — to emerge as the more aesthetically enduring of Austin’s early residential towers. In 2018, Cambridge Tower was added to the National Historic Register in recognition of its largely unaltered condition, its place as one of Austin’s first New Formalist buildings, and its early role in providing a downtown residential alternative to increased suburbanization. It’s now a darling of design buffs for its hip-again modern-meets-Mediterranean classicism.

In today’s New Austin, Cambridge Tower’s shaping concept finally caught up with it —compact and walkable in a metropolitan area of 2 million, its retro vibe is reclaimed by new generations and architects and tech firms office in the downstairs spaces where once were fashion and fine dining. Construction cranes and taller buildings infringe on some of the old limitless views, but it holds its own in a bezel of graceful human scale.

Marla Akin
Marla Akin is an enthusiast of cultural history and roadside America, currently serving on the board of the Society of Commercial Archeology. A postcard and vintage paper collector, she retired as Assistant Director of the UT Michener Center for Writers in 2018. She currently serves on the Sightlines board.