Being a professional spectator: Jennifer duBois 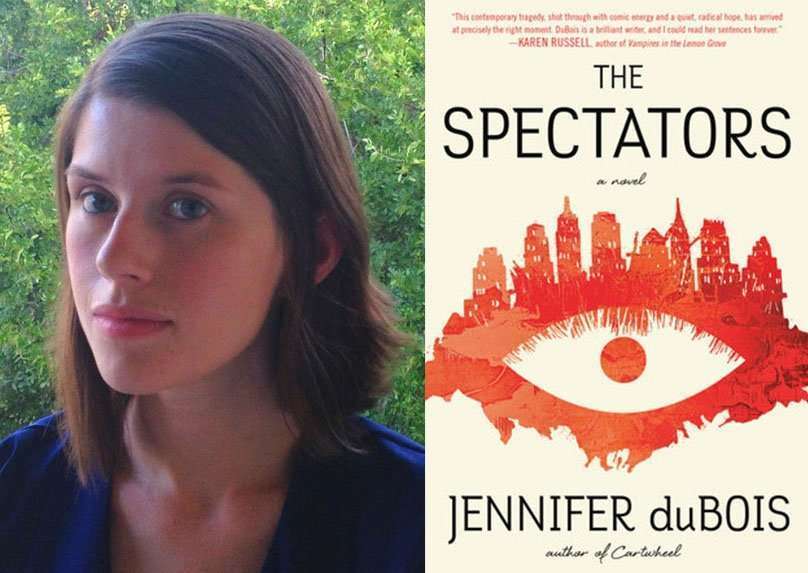 After I had been friends with novelist Jennifer duBois for a couple of years, she casually mentioned that when she was 23, she seriously considered joining the CIA.

“I wrote an essay about it,” she told me.

The essay chronicles the proverbial fork in the road duBois met at that time in her life: whether to pursue a master’s of fine arts degree at the prestigious Iowa Writers’ Workshop, or accept the Conditional Offer of Employment she’d received from the CIA following a rigorous, months-long application process.

“Writers and spies share an ability — and a willingness — to hide in plain sight, to deflect attention not only from the nature of their role but from the fact that they have any role at all,” duBois reflected in “MFA vs. CIA,” published in Lapham’s Quarterly, as she considered how these two seemingly divergent professional paths share certain, key affinities. In other words, why she felt equally drawn to both.

Another major concern for duBois was the CIA’s alarming terms regarding her potential future as a writer.

“When it comes to writing for publication, the CIA’s terms are stark,” she said. “Once you have been under their employ, everything you write for the rest of your life will be subject to their review and redaction.”

Since deciding to attend Iowa in 2006, duBois has published three novels, beginning with “A Partial History of Lost Causes” in 2012, “Cartwheel” in 2013, and now “The Spectators,” which was released in April.

“The Spectators” is a sprawling, ambitious book about an idealistic public defender in New York City in the 1970s, at the height of the gay rights movement. Later, as the AIDS crisis of the 1980s grows, Miller becomes Mattie M, the host of an incendiary TV talk show who is blamed for inspiring a deadly mass shooting.

While “The Spectators” pivots around Matthew Miller/Mattie M it is not told from his perspective. Rather it’s told by two characters whose lives intersect closely with his: a one-time lover who follows Matthew’s dubious celebrity with disenchantment, and also his young publicist, who weighs misgivings about contributing to the enterprise of Mattie’s talk show, especially in the wake of the shooting.

[su_pullquote]“Whenever I encounter a question I’m truly vexed by, that’s when I know I have the beginnings of a book.”[/su_pullquote]

DuBois has said that “The Spectators” germinated from a “This American Life” episode she heard in 2012, “Leaving the Fold,” about Jerry Springer’s early career as a promising progressive politician who drew comparisons to the Kennedys before a scandal ruined his political standing and he went on to rule the talk-show world for some time.

I asked duBois how she went from hearing this story on “This American Life” to deciding to write a novel about some fictionalized version of this figure,

“The episode was actually a rebroadcast from 2004, when Springer was considering a bid for the Ohio Senate seat,” duBois said. “At the time, this was still one of the more absurd things that had happened in American politics, and the story was a lot about the irony of that perception. Folks widely viewed Springer as this clownish figure who was trying to pretend he was a statesman — when actually he was this person with a very substantive history, trying (too late) to reclaim a former self. The questions and complexities of this trajectory struck me — pretty immediately — as obviously novelistic in scope and nature.”

She added: “Whenever I encounter a question I’m truly vexed by, that’s when I know I have the beginnings of a book. And in this case the question was: how does a person transform so profoundly over the course of a lifetime?”

I found duBois’s choice to set the book heavily to the 1990s to be compelling and wondered how she came to this decision.

“I became very interested in the moral panics of the 90s — the rather overwrought vilification of certain elements of popular cultural, such as video games and death metal and whatnot,” she said. “I was thinking especially about the Columbine shooting, and the conversation surrounding the shooters’ Marilyn Manson fandom (which seemed like a deflection from the real conversation we perhaps should have been having). I thought it would be interesting to take a Columbine-like incident and tie it culturally to a Jerry Springer-like show, and see how that might play out narratively.”

Reviewing “The Spectators” for The New York Times, Ken Turner wrote, “good fiction about celebrity culture is tricky to pull off and rare…What a good surprise it is, therefore, to come upon Jennifer duBois’s ‘The Spectators’ and read a novel about a TV star that feels just right.”

I first met duBois shortly after she moved to Austin in 2013. I’d just read “Cartwheel” and already had a literary crush on the new writer in town. A faculty position in the English Department at Texas State University, where she continues to teach, originally brought duBois to Austin.

“I find graduate teaching to be incredibly energizing,” duBois told me. “It’s interesting — and probably helpful to my own work — to be thinking and talking about craft as much as I do. But what’s more meaningful is getting to watch young people come to know themselves as artists — by learning to define their own set of fictional values, then enact them in their work.”

“There’s a reason all the students fight to work with her,” said Shannon Perri, a former student of duBois’s who now also teaches in the English Department at Texas State. “She’s wickedly smart, perceptive, encouraging, and helpful.”

“One of the first times I met [duBois], she asked me what I was working on. As a young writing student, this question meant so much to me — that such an acclaimed writer would treat my ambitions with curiosity and respect. Throughout grad school, she proved to be one of the most generous professors I’ve ever had,” added Perri. “To have a professor light up as I shared my novel idea and push me to submit my work provided a sense of possibility that I’m still grateful for.”

Over the years duBois and I have traded drafts of our novels and often gotten together to discuss writing interests and challenges. As she wrestled “The Spectators” into its final form, she vowed to write a simpler book the next time.

“Sometime in the last years of writing ‘The Spectators’ — which was such a structural challenge, with so many moving pieces — I promised myself that the next book I wrote would be much simpler from a craft perspective. I wanted to write something linear, in a single first-person point of view, preferably something short,” duBois told me.

“I think I intuited that the moral complexities inherent in this new project would offset the narrative simplicity, and that this particular story was particularly well-suited to a Lolita-like perspective: blinkered, self-serving, and singular.”

Not long ago she told me the concept for this new novel, and it seemed like just a few months later (and in reality was not much more), she shared a draft of the book with me.

“I was revising ‘The Spectators’ for so long that when I finally had the chance to tackle this new book, it sort of emerged fully formed,” she described.