In his new book, the poet brings an ecstatic empathy to portrayals of violence and oppression in contemporary life. 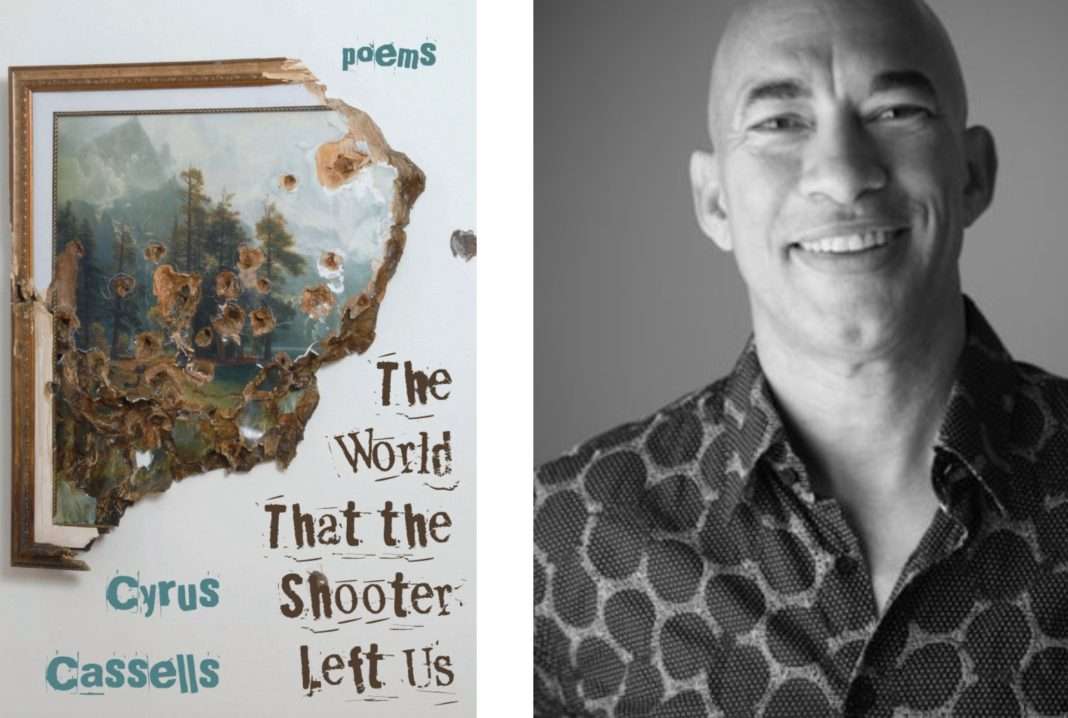 Perhaps above all else, Cyrus Cassells is a listener.

In “The World That the Shooter Left Us,” his most recent book (of many), the poet, who lives in Austin and teaches in the MFA program at Texas State, has his antenna raised high to beam in voices, news and songs from near and far, and to document them in his poems. In a recent email, Cassells commented that “this book was written in Spain and Italy in the summer of 2019 in the space of eight weeks — the most mysterious and speedy of all my poetry books: all my feelings about the day-to-day chaos and unravelling democracy in America since 2016 poured out of me.”

In hearing this stream of sounds and stories, readers may ask: what qualifies Cassells to channel all these identities, to speak for his subjects? Cassells points to this risk in the epigraph, “And Now,” a poem by Adrienne Rich that speaks of “our time… when to feel with a human stranger/ was declared obsolete.” Like Rich, Cassells can’t abide such rules: “to feel with a human stranger” might well be the objective of this collection.

A group of persona poems that Cassells referred to in our correspondence as a “#MeToo sequence” embodies this empathetic bent. Immediate as conversation, these poems carry the reader along with their storytelling cadence. Cassells reflected that “I naturally gravitate toward persona work due to the actor in me. I love trying to authentically recreate characters and voices on the page.”

The speaker of “Trafficked Angel,” a young musician who has escaped a childhood of abuse and exploitation, describes a new sense of control over his identity:

Yes, my invisible wings are intact,
My worshipped angel feet

Are on solid-as-Gibraltar ground
& when I belt out a song nowadays, you hear

The whole truth burning in my voice

A consciousness of the ways others fail to tell the “whole truth” motivates the intense political engagement of this book. At times reminiscent of Dante, Cassells pinpoints the sins of public figures while conveying empathy for people wronged by contemporary society. A throughline that first surfaces in the titular poem, “The World That the Shooter Left Us,” traces how often a central figure “never makes it out of the poem alive.”

Each of the book’s four parts has a theme connected to particular kinds of oppression, as visited upon black and brown Americans; victims who have spoken out in the #MeToo movement; the subjects of American democracy; and, in a final, especially elegiac section, the “disappeared” of Argentina as well as migrants at the US border.

Cassells’ eclectic sensibility allows him to span such breadth of content. His poems index a dizzying array of artists, cultural figures, and current events that beckon the reader down internet rabbit holes. Asked about this current in his work, Cassells described himself as “very much a multi-lingual world traveler and world citizen, as well as a voracious reader. Plus, I grew up in the military. I love comparative literature and translate Catalan, Italian, and Spanish poetry.”

Beyond the persona poems, the ecstatic ideation of Cassells’ fast couplets sometimes produces a sense of detachment from the intense realities they represent. Readers face a familiar conundrum: when the tragedies come fast and furious, how can we extend the compassion owed to the victims of each one? The book both provokes and answers this question.

A section of the long poem “Icebox,” towards the volume’s end, describes with horror and tenderness the death and imagined journey of Carlos Hernandez Vasquez, a teen migrant from Guatemala who died in ICE custody in 2019 after being diagnosed with the flu. In a few, economical lines, Cassells confronts readers with images drawn directly from the security footage released six months later that showed the visible distress of Hernandez Vasquez as he died, without attention from any staff, in his cell. The poet touches on the systemic repression of humanitarian aid to migrants, but doesn’t stop there. Extending into poetic imagination, he reminds us of the fragile, beautiful life lost in that room:

In a lack-love hell
Of chilly concrete & glistening mylar

Not a trace of the ash-white ridges
Carlos witnessed on the way,

No warmth of his dreaming cheek
Pressed against the train gondola

Representations like these show care in lieu of sensationalism, love in lieu of violence and neglect. In the face of demands to hide ourselves in the act of caring about others, Cassells refuses. Through his ornate diction and ebullient voice, readers experience what it is to live and witness as he does.

Cyrus Cassells
‘The World That the Shooter Left Us’
Four Way Books, 120 pages