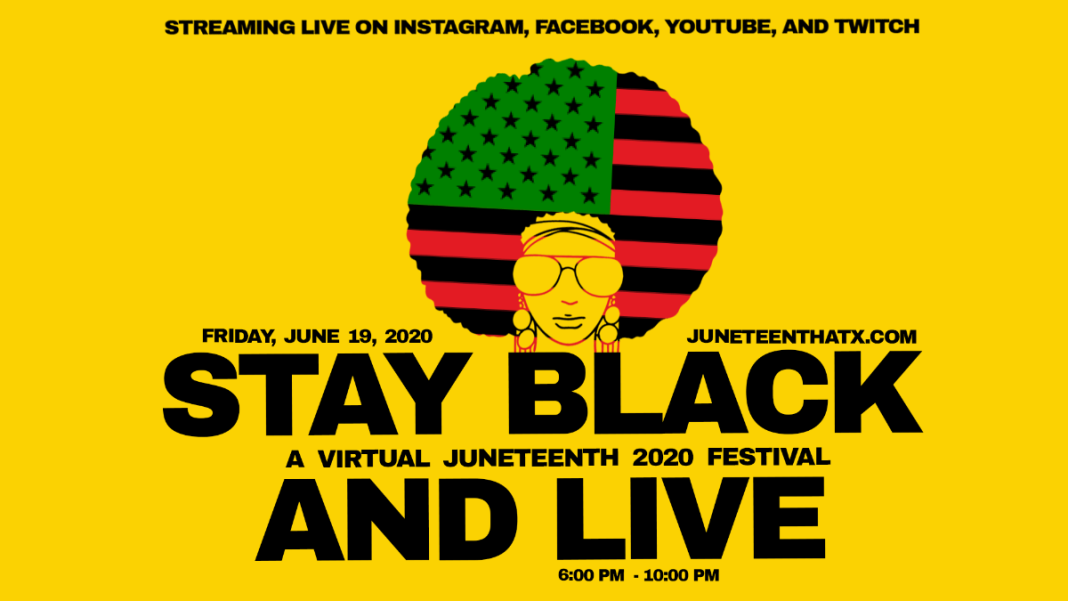 Juneteenth, which commemorates the announcement of the abolition of slavery in Texas, is typically celebrated in Austin with a parade through the eastside that ends in Rosewood Park — established in 1929 by the city’s segregationist policies as a public park for African Americans.

However this year, with the coronavirus pandemic still spreading, organizers have planned a virtual Juneteenth festival.

Find more information about the live stream and the festival at juneteenthatx.com

“Juneteenth 2020” is a collaboration between several Black organizations in Austin’s historic eastside: Greater East Austin Youth Association, Six Square, the Carver Museum, the Carver Library, and Jump On It.

“This year’s Juneteenth celebration emphasizes not only the timeless themes of freedom and perseverance, but also recognizes the unprecedented times we are currently living in,” said festival organizers in a statement.

Musician/DJ Nook Turner will then introduce Freedom Desk, a music and spoken word performance series that will feature artists from the Austin/Travis County area. The musical lineup includes Riders Against the Storm, Ebony Stewart, Anatasia and KB, with more to be announced.

And there’s a community raffle with prizes from local businesses. Raffle proceeds will benefit the Greater East Austin Youth Association and Six Square.

Tickets can be purchased at go.rallyup.com/juneteenthatx

One in-person event will take place, however. With the support of the volunteer humanitarian organization 10,000 Fearless First Responders, some 600 BBQ plates will be distributed free to Eastside communities most-impacted by COVID-19. Food distribution will begin at 5:30 p.m. in the Carver Museum parking lot behind Kealing Middle School.

Also known as Freedom Day or Emancipation Day, Juneteenth commemorates the announcement of the abolition of slavery in Texas, two years after President Abraham Lincoln issued the Emancipation Proclamation on Jan. 1 1863. It was until June 19, 1865, that Union General Gordon Granger read General Orders No. 3 to the people of Galveston.

The Line-up: Eleven Austin exhibitions to look at in March