Polly Rosenwaike flips the script on writing and motherhood 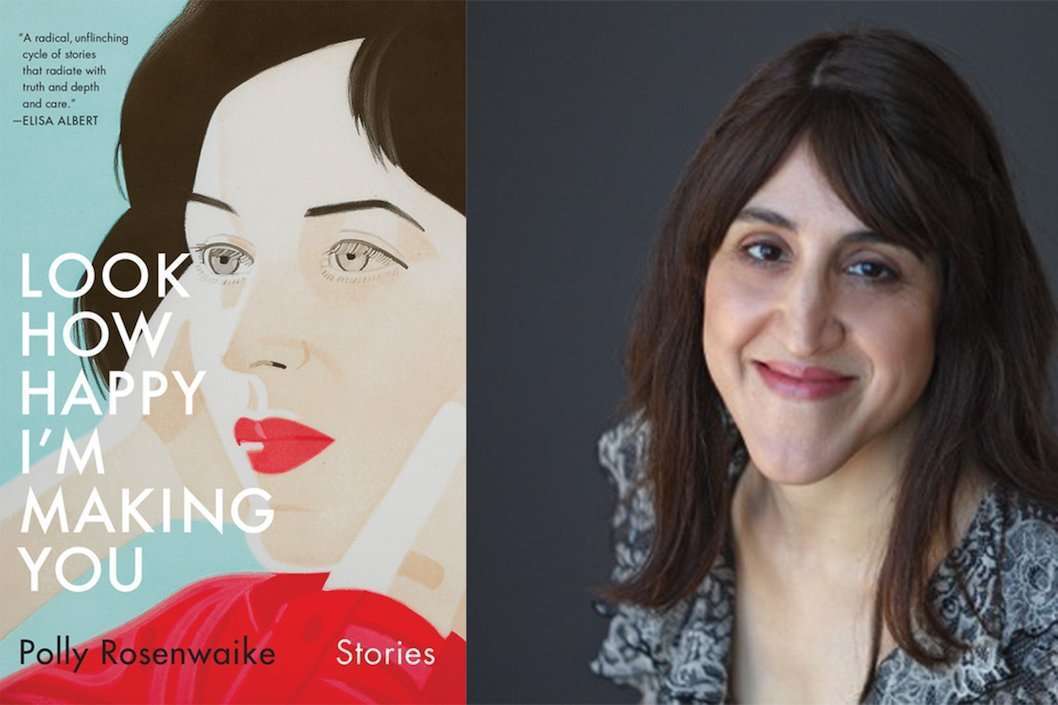 Polly Rosenwaike will be discussing her debut story collection, “Look How Happy I’m Making You,” at BookPeople at 7 p.m. on June 25., and the following evening, June 26, she will lead a writing workshop for adults through the writing organization Austin Bat Cave.

Rosenwaike’s captivating collection takes a kaleidoscopic view on human reproduction, exploring the phenomenon from an expansive view of perspectives. Her stories explore infertility, accidental pregnancy, abortion, miscarriage, and the early joys and pains of motherhood.

Rosenwaike has published stories, essays, and reviews in The New York Times Book Review, Glimmer Train, New England Review, The Millions, and the San Francisco Chronicle. She is fiction editor for Michigan Quarterly Review, and lives in Ann Arbor with the poet Cody Walker and their two daughters.

I chatted with Rosenwaike via e-mail about her new book and writing in general.

DALIA AZIM: This collection strikes me as a literary experiment that examines the full spectrum of parenthood—from not wanting kids to struggling to have children to accidental parenthood to the challenges of postpartum life. I loved this line from the story “Love Bug, Sweetie Dear, Pumpkin Pie, Etc.,” which captures a couple’s polarized views on whether or not to have a child: “It struck at the core of the fundamental clash between them—his native ebullience versus her inherent skepticism.” Was this collection consciously an attempt at grappling with the large and complex concept of parenthood?

POLLY ROSENWAIKE: Yes, and specifically the question of what it means to become pregnant and become a mother for the first time. In the story you mention, the couple, Serena and Henry, had decided they didn’t want children, and then he changes his mind. Serena, the inherent skeptic, agrees to try for a baby, but after their daughter is born, she’s still grappling with this enormous new responsibility and position she’s entered into. Even if you know you want to have a baby, the whole process can be filled with uncertainty and mixed feelings. Deciding to have a child is an extremely common and ordinary decision, but for the people experiencing it, it’s absolutely extraordinary. I wanted to capture how full of extremes parenthood can be, especially for new mothers. The kid is incredibly cute and precious and it’s amazing that you gave birth to her, and at the same time you feel like a wreck and can’t believe you’ve got to take care of this helpless baby all the time.

DA: I distinctly remember the first time I read Alice Munro’s stories and what a revelation they were to me. I felt deeply inspired and energized by the way she elevates the domestic as dramatic subject matter. I’m wondering whose writing has influenced this collection and your writing in general?

PR: Alice Munro, for sure! I love how interior her stories are, how much drama she creates within women’s and girls’ conflicted feelings about themselves and their relationships. I could never learn enough from the likes of Lorrie Moore, Grace Paley, Amy Hempel, and Lydia Davis about how to craft sharp sentences and keep a story with a dark underbelly aloft through wit and humor. To nod toward two Austin short story writers, I greatly admire the sly, idiosyncratic work of Deb Olin Unferth and Elizabeth McCracken. I didn’t read McCracken’s “An Exact Replica of a Figment of My Imagination” until after my book was written, but her memoir about her stillbirth is an amazing contribution to recent literature about women’s reproductive lives.

DA: I loved how you structured this collection. Can you talk a little bit about how you put it together? Did particular stories intersect with one another in your mind as you were writing them? The collection really has an effortless flow to it, and I wonder how their order relates to the order in which you wrote them?

PR: Though none of the characters reappear, it’s a thematically linked collection, and it moves chronologically from the story of a couple having trouble conceiving, through abortion and miscarriage, the later stages of pregnancy, the shock of birth, postpartum depression and adjusting to life with an infant, ending with a story about a couple sleep training their ten-month-old. I’ve enjoyed hearing from some readers who’ve read the book quickly, as if it were a novel; my hope was that, as a whole, it would provide a satisfying narrative arc. There’s the drama of wanting a baby and not being able to have one, and then the—shall we say—narrative twist of finally getting a baby and not being sure that you want one. The book is about to be optioned by a film company, and though it’s a real longshot that it would actually become a film, I like the idea that a screenwriter could potentially adapt the material to make the stories intersect more. I wrote some of the stories in the first half of the book before I had the idea to do a collection on this theme, and I wrote each of them to stand alone. Clearly, overall, I was writing from my standpoint as a middle-class white woman, having experienced some of the things that happen across the stories and imagined others. I hope that together they offer an in-depth portrait of a particular time in these characters’ lives.

DA: I really loved your piece “Working Mothers, Let Go of Your Guilt,” published by Lit Hub in April. Your essay not only looks at the very real challenges of being an artist-parent, but also at the double standard that often comes into play when mothers are asked about how they manage to make their work despite the burdens of parenthood, when men are rarely asked the same question.

As you detail in your essay, when author Lauren Groff was asked, “Can you talk about your process and how you manage work and family?” in an interview with the Harvard Gazette, she replied: “I understand that this is a question of vital importance to many people, particularly to other mothers who are artists trying to get their work done, and know that I feel for everyone in the struggle. But until I see a male writer asked this question, I’m going to respectfully decline to answer it.”

I wonder if in this conversation we flip the script, and I ask you, has parenthood affected your creative process in positive ways?

PR: Thank you for flipping the script! Indeed, it has, if for no other reason than that it wouldn’t have been possible for me to write this book about new motherhood if I hadn’t gone through it. But having children has fueled my creative drive in other ways too. Just last week my eight-year-old daughter came home from school with two pottery creations she was very proud of. One of them is a misshapen purple circle with crowded blue letters that say “Be happy.” It’s now sitting on my desk. Anyone who knows me knows that I’m not the sort of person to display that sort of simple cheery message. But the fact that my daughter made it moves me, and it’s an excellent reminder, after all, of why one sets out to make art, with no certainty that it will prove useful, or will last, or that anyone will pay attention to it. One of the things that’s been thrilling about having children is to see how much they love sitting down and creating things: drawings, sculpture, pages of words and names. It’s their play and their work, too, as they’re still young enough for school to blur those more adult distinctions. I need to be reminded that art is play, and I need to be reminded to be happy, and my kids continually do that for me.

DA: What are you working on now?

PR: I’m beginning work on something that excites me and terrifies me, in that it’s intended to be a novel, and to be less autobiographical than my story collection, and to venture into territory that requires research and imaginative powers I haven’t yet tapped. I sound tentative about it because I am, but I’m drawn to the idea that a writer’s goal is sometimes to try to do something just to see if she can pull it off.

DA: What books are stacked up on your nightstand at the moment?

PR: It’s a big stack indeed. I’m in the middle of three great reads: Elizabeth Geoghegan’s gorgeous story collection, “eightball”; Rachel Howard’s “The Risk of Us,” a moving novel about a couple adopting a foster child; and “Crush,” Cathy Alter, and Dave Singleton’s fun anthology about celebrity crushes. Not yet started: the Japanese writer Taeko Kono’s “Toddler-Hunting and Other Stories” and Glory Edim’s anthology “Well-Read Black Girl,” which will no doubt lead me to more books on the nightstand. And “Anne of Green Gables,” which, in an ideal world in which bedtime happens early enough for us to snuggle with a book, I’d like to read to my daughters.