Not only are the visual elements of their art strikingly similar, but their voices suggest an animated and authentic creative conversation across a generation, even though they never met.

“True Believers,” organized by San Antonio’s McNay Art Museum, sheds light on two artists from two generations. They never met each other, but their work shares the same DNA. Both Benny Andrews and Deborah Roberts work in collage, harvesting materials and building images bonded by the Black experience.

Born to sharecroppers in Plainview, Georgia, Benny Andrews (1930- 2006) showed early artistic talent earning a bachelor’s degree in fine arts from the School of the Art Institute of Chicago on the GI Bill. In the late 1950s he moved to New York City, where he became a successful working artist and member of an art community that included Red Grooms, Bob Thompson, Lester Johnson, Naim June Paik, George Segal, and Jacob Lawrence. Andrews was also an activist. He started an art program for prisoners and helped found the Black Emergency Cultural Coalition, which sought representation for African American art professionals. For nearly three decades he taught at Queens College of the City University of New York.

Andrews’ professional success is particularly noteworthy considering that he was a primarily figurative artist, during a time dominated by abstraction. His best-known works were portrayals of people in collage form, incorporating clothing, pieces of fabric, and painting. Andrews’ collages depicting scenes of real and imagined people often feature a considerably high relief (standing 2” out from the support), uncharacteristically large scale (often over six feet tall), and empty white backgrounds, much like the collages of Deborah Roberts.

More recent to her popularity, Roberts has gained significant critical attention for her bold collaged images of Black youth that also examine societal pressures and Black identity. In addition to garnering gallery shows and securing museum acquisitions, in 2021 she was granted a solo exhibition, “I’m,” at The Contemporary Austin that traveled to the MCA Denver and is now at the Cummer Museum of Art in Jacksonville, Florida.

Roberts was born in Austin, Texas in 1962. She too showed a childhood interest in art and earned her bachelor’s degree in Fine Arts from the University of North Texas and an MFA from Syracuse University.

Seeing Andrews’ and Roberts’ work side-by-side may have some wondering, “Why has no one thought of this before?” It’s just such an opportune match, one art historians live for with their beloved “comparison-contrasts.” Not only are the visual elements of Andrews and Roberts strikingly similar, but their voices suggest an animated and authentic conversation.

I asked the curators of “True Believers,” René Paul Barilleaux and Lauren Thompson to explain the impetus for the pairing.

“We were familiar with the work of both artists, having shown both in previous McNay exhibitions,” they responded in an email. “Knowing the work, and looking at it through the lens of themes, techniques, and approaches that are common to both, we wondered about the influence of Andrews on Roberts – if that was something real and documented beyond our seeing the connections in the collage/paintings. With this idea of influence in mind, we did some research to see if our intuition was correct — finding the podcast confirmed what we thought to be the case.”

The podcast Barilleuax mentions is from The Art Newspaper’s “The Week in Art” series and an episode featuring Roberts’ response to seeing Andrew’s work “No More Games,” at the Museum of Modern Art. It is played as part of the exhibition, allowing guests to hear Roberts’ own words, accompanied by an animation of the original two-panel painting (1970), as well as a different painted version, and several pencil studies for the painting. (The original was too fragile to move.)

The politically charged painting depicts a deceased and disfigured body covered by a crumpled American flag alongside a seated Black youth posed with his forearms resting on his thighs.  A serpent symbol encircles a column/arm emerging from the flag and a desolate sun sits in the sky. Roberts says, “…this piece just struck me. I mean, ‘No More Games’ which was just so perfect. It’s just like: He’s had enough. Enough is enough.”

Another political issue addressed in both artists’ work is the injustice of the U.S. prison system. While Andrews taught art at the Manhattan Detention Complex, nicknamed “The Tombs,” Roberts calls up systemic racism’s impact on mass incarceration in her figures who wear black and white stripes.

Andrews also protested oppressive systems such as Apartheid in South Africa. His 1985 “Portrait of Oppression (Homage to the Black South Africans)” shows a partial figure of a man dressed in a denim vest and khaki work pants which are collaged scraps of real clothing. Most of the composition is a white void, yet a chain clearly hangs by his right shoulder symbolizing institutionalized racism of the period.

In the more personal “Self Portrait” (1992) Andrews affirms his self-pride along with his role in the canon, like countless artists before him. Andrews sits on a table, but the picture is unusually skinny and vertical, echoed in the upright paint brush he holds authoritatively in one hand, and in the other, his palette of colorful paints. He wears a collaged three-dimensional light blue t-shirt with his name “BENNY” in white letters on the chest, hinting a playful side to his personality.

Another idea woven into the exhibition is mentorship. Not only did Andrews’ influence through his activism but through his practice. He supported Roberts unknowingly. His legacy acted as mentor.

When asked (in the podcast) about Andrews’ impact, self-professed fan Roberts says, “Any time you can go to an art piece, and it can teach you, it can give you a pathway to create something, maybe even down the line, it’s done its job.”

While Robert’s portrays images fictional people, they resonate with a depth that opens dialogue, encouraging the examination of societal stereotypes passed down. Andrews’ portraits of real people — his biological father (a self-taught artist and influence) Alice Neel (a painter, co-exhibitor, and lifelong friend) and other friends and artists — point to the mentor-mentee connections made within one life. There’s a thread of real and removed kinship that exists throughout this exhibition. 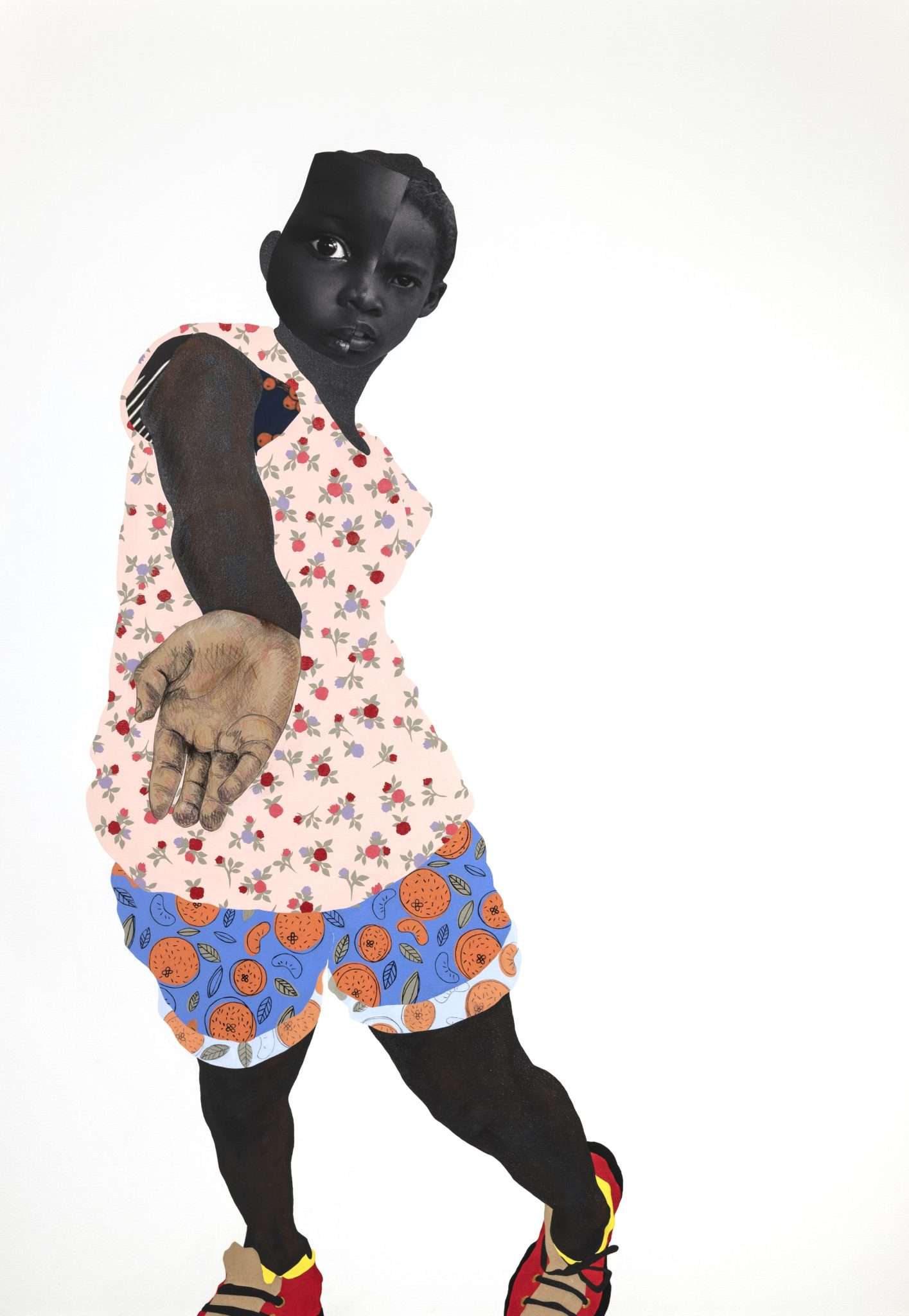 And while for many “True Believers” will be an introduction to the New York-centric Andrews through an impressive quantity (and quality) of his work, it’s one of Robert’s works from the McNay’s collection for which the show is named. “True Believer” (2020) looks at a young girl wearing wonderfully mismatched patterns and bright red sneakers. As her arm extends to tender an enlarged palm, viewers can’t help but engage. Roberts captures the sense of childhood identity when identity is still germinating — a time when children are most free but also most malleable.

Of her young Black subjects and their “unfixedness” Roberts states, “Each child has character and agency to find their own way amidst the complicated narratives of American, African American and art history.”

It’s easy to see commonalities in form and content in the artwork of Andrews and Roberts. Although, identifying the differences, however unexpected or subtle, is an education.

Erin Keever
Erin Keever is an Adjunct Professor of Art History, freelance writer, art historian and art appraiser. She lives and works in Austin, and serves on the Sightlines board.