The latest iteration of the choreographer's on-going experiment through movement asks, 'What happens when all the proverbial balloons burst?'

What do you want to hold onto, what do you want to let go of? This is the crux of Gesel Mason’s “burst!” an on-going experiment through movement and self-reflection that gets at how we hold space in this ever-changing moment.

Stemming from Mason’s Texas Performing Arts/Fusebox Festival residency last fall — which culminated as a 5-hour durational performance at ICOSA Gallery on New Year’s Eve — this latest iteration of “burst!” is being presented online by the UT Department of Theater & Dance.

Mason first conceived of the project as a creative prompt for Black women to share their voices around a single question: what would it mean to be your fullest self without fear or apology? 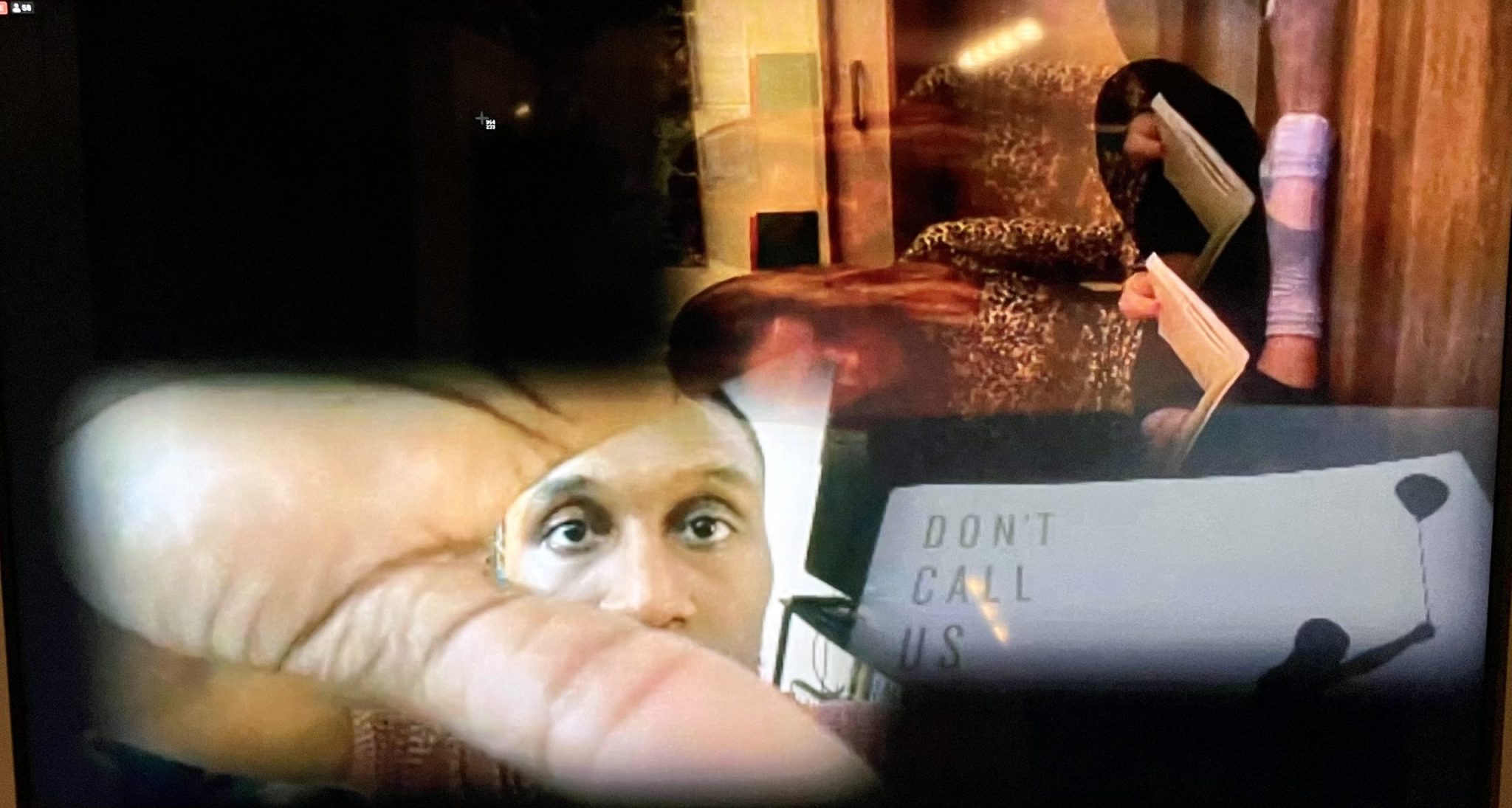 In many ways Mason is using the same prompt in the UT production, but her role as an educator overtakes her inquiry as an artist. “burst!” becomes a way for young people to physicalize the uncertainty of their lives right now, what Mason calls: “a process, a shedding, an undoing.”

The hourlong performance is largely prerecorded, with some live elements thrown in, making its ad hoc approach all the more authentic. Socially-distanced rehearsals began in January for a group of dancers who would never be in the same space all together. And last week’s winter storm and subsequent power outage meant cancelling further preparations. Frozen fingers were crossed.

But technology and creativity come more naturally to a younger generation, and “burst!” blooms as a digital blend of dance and dramaturgy. Eighteen performers appear throughout, mostly in squares on the screen, giving us a peek into their dorms and homes — wherever they’ve been holed up this semester — their beds as backgrounds and hardwood flooring, the stage.

The experience is a bit like looking into an apartment building from across the way, each quadrant a window into an atomized existence. All the dancers make do with their environs, concealing pets and roommates and dishes for the time being, while connecting in an embodied process even Zoom struggles to fully capture. But these shortfalls of technology garner a new form of intimacy. 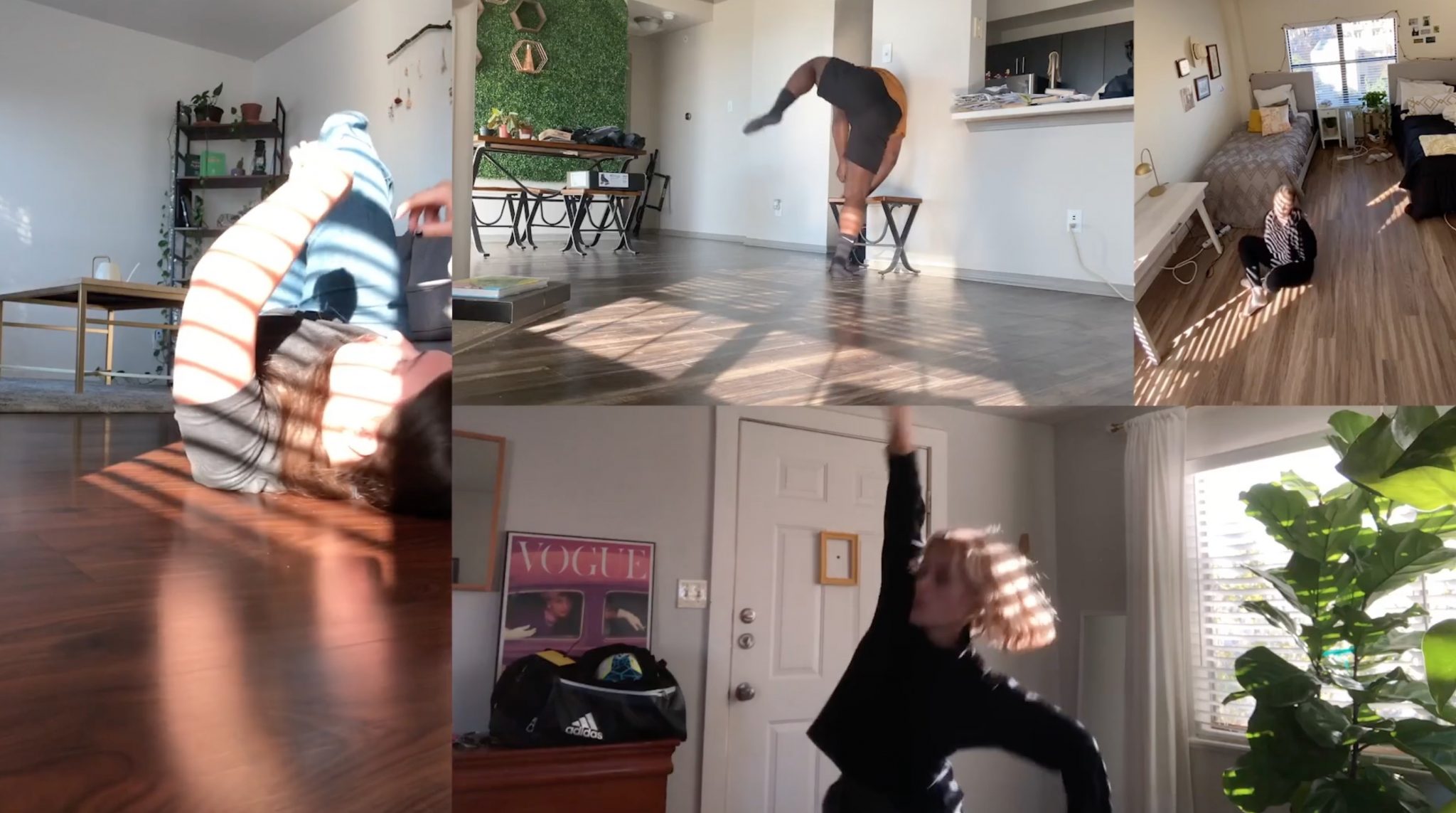 One dancer arches her back down a set of stairs, while another stirs at the bottom of a building stairwell. A tiny terrace becomes a gilded cage for someone else. A pair of feet push into the camera wearing dirty white socks. Boredom has done away with any pretense.

Stripes from Venetian blinds cast rhythmic shadows in the most sun-drenched spaces. One scene in particular shows four apartments at once, with each dancer stretching and writhing within his or her own set of bars.

Yunina Barbour Payne’s spoken word poetics guide us through their movement with text and recitation, exploring the multivalence of “burst!” at every angle. What “burst” is and what “burst” isn’t. “Burst is not perfect,” she firmly declares while the words scrawl out on the screen, “though it might be.”

While seated in a chair, facing away from the viewer, performer Uwazi Zamani recalls the death of his grandfather some years ago. He was all I had, says Zamani: “I felt like he was the key to understanding my dad.” The screen splits and Zamani remains seated while sharing his desire to break generational curses in his family. The other half of the screen shows him doing improvisational dance in a hallway, while a lone chair sits against the wall.

Mason has provided an intimate, ruminative experience with these young performers; a glimpse into their lives during this upending moment. Toward the end, a dancer slips into a dress made of elongated balloons, not unlike the one Mason wore during her piece at ICOSA on New Year’s Eve. Different costumes allow for different ways of being, she says — in the world, in one’s body, in these spaces.

“Burst!” is about transformation, offers Mason. What happens when all the proverbial balloons burst; what will we choose then?

The performance ends on an optimistic note, an upbeat digital pulse creates new possibility as Payne’s spoken word poetry speeds up all around the music and movement. Something’s going to pop, she promises. “One way or another, that bubble will burst.