I write this review too late.

It is the last day of Eva Claycomb’s first solo exhibition, “Last Time” at Recspec Gallery. It might be the only show for which it is appropriate to publish a too-late review.

Time has been a nemesis of late for the Austin art scene, and though it is doubtful that the work made for this exhibition was created with the continual dissolution of Austin based artist-run and commercial art spaces in mind, it is hard not to see it through that lens. After all, the Flatbed Press Building that houses a dozen galleries and studies — including Recspec Gallery — is closing next February, and that’s just the latest in a string of uncertain futures announce by a staggering portion of the city’s creative spaces.

No, Claycomb’s “Last Time” is much more than that, much better than that, more broad in its approach to cycles, and ends of cycles. Her works are, no doubt, meant to be enjoyed and studied by both those within and outside of a crumbling ecology. The real wonder of Claycomb’s art is her combination of such deep darknesses with the humor and peace provided by distant perspective. There is a sense that we, all humanity, is just along for the ride, and that’s okay.

In this way Claycomb’s 13 prints, paintings, and sculptures (each named in sequence from “one o clock” to “thirteen o clock”) are calming. They provide a lithium-like serenity that in our current day of shaky markets and political upheaval is refreshing — needed even.

Images that reference time are rendered in flat fields of color delineated by a loose but consistent hand that somehow cannot be mistaken for naive imprecision. The images are flowing in the extreme, but certainly not accidental. The scale of time from piece to piece shifts; matches burn down to the fingertips in seconds alongside bursting volcanoes marking geological pressure built up over eons. A clock ticks with infinity’s symbolic sideways numeral eight the only numeral. Still others seem to represent cosmological time with less decipherable heavenly bodies churning.

The artist’s work reminds me of a once local favorite, Kevin McNamee-Tweed, but in a strange reversal. Tweed rendered the banal and the common as something to behold, to pay attention to and untangle. Conversely, Claycomb, in a not-so-different visual style, renders the cataclysmic and the profound in the framework of just-another-day, just life. Claycomb allows us to watch an earth-killing asteroid with the same pleasure as watching a sunset.

Which brings us to an auxiliary work of the show, but at least to this writer, the most important. Before leaving Recspec I was enticed by an artist-made lapel pin, a burning meteor, more flaming tail than projectile, but with a smiling face on its core. The same symbol can be found through the window of “twelve o clock,” an interior scene rendered in red ink on a field of peach paper. Here a hand in mudra raises a clock-shaped tea bag from a cup, a vase holds both wilting and upright stems, and through a window our smiling space-rock burns downward.

And so I’m reminded to watch with distant awe instead of pointless panic. The current cycle of arts organizations, our hard work and our progress, may well be mostly undone. But this is Claycomb’s first solo exhibition, and certainly not her last. Maybe it is true that mass extinction is necessary for evolution to move forward. After the long silence — and I am afraid it may well be a long silence — I can only hope that mammals like Claycomb can outdo the complexity that came before them.

I wear Claycomb’s comet as a reminder.

Eva Claycomb’s “Last Time” was on exhibition Jan. 12 – Feb. 10 at Recspec Gallery in the Flatbed Press building. If you’d like your own comet, an original artwork or just want to see other images of the show visit the exhibition page at recspec-gallery.com. 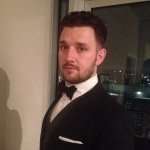