Wired sounds: Not your typical audiobooks

"Wires" is a choose your own adventure sound installation, and exhibition 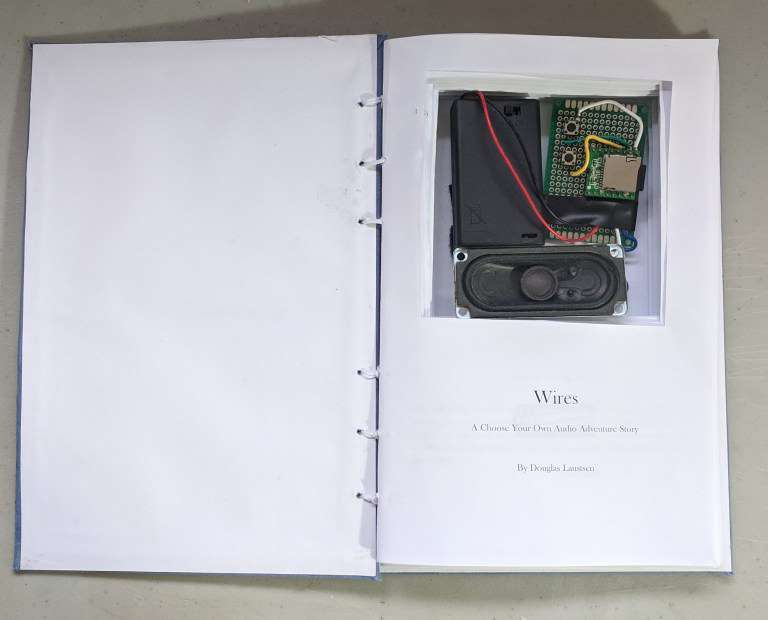 The traditionally passive act of reading is finally getting the jolt of suspense — and individual direction — that you never knew it needed.

“Wires” is an upcoming interactive sound installation by composer-educator Douglas Laustsen. And it is also a choose your own adventure (CYOA) audio experience that offers an audience a series of choices through texts written in handcrafted books. In the process of reading, selecting narrative options, and interacting with mp3-playing devices, visitors create their own musical soundscape.

Originally from New Jersey and now based in Austin, Laustsen has had his sound art featured at the Blanton Museum of Art and at new music organization Church of the Friendly Ghost’s annual festival. His previous projects have similarly featured dynamic elements to his compositions, including  “The Opposite of Forecasting,” which utilizes live Austin weather data to create music. In fact, “Forecasting” is still broadcasting online at weather.lownote.net.

Opening at the Museum of Human Achievement on March 2, “Wires” is an exhibition of 30 books written and constructed by Laustsen. In addition to fictional narratives, these tomes contain small speaker circuits for participants to activate, with each one containing different cells of music. At the end of each book, readers will be given a choice — à la classic CYOA novels — which will lead them to another book, and so on, each book adding a new layer of music that will overlay on to the sounds still looping from previously-read books.

The project was derived from a happy coincidence. In looking for objects to fit small speakers in (other considerations being cookie boxes and assorted tins), Lausten found that carved-in books were not only a perfect fit, but also afforded him a slew of narrative possibilities.

“Almost immediately multiple ideas popped up,” Laustsen says about his makeshift book compartments. “It gave the book a purpose to exist in addition to the music.”

“Wires” presents an appropriately ambient score through its cellular composition. Since the sound of the music depends on which books are (and are not) read, it’s unlikely that any one visitor will hear the same mix of audio as another. The total number of aural combinations is somewhere around 118.

Considering the many units of music that could occur during a tour of the exhibit, Laustsen’s composition concentrates less on pure melody and more on electronic, timbre-based soundscapes. Because of this dynamicism, Laustsen didn’t write a full score for the project. Not a traditional one, anyway.

“Most of my scores now end up being spreadsheets,” Laustsen muses.

Paralleling its music, the story told in “Wires” is more ambiguous than standard fiction, leaning more into the realm of magical realism.

“Wires” follows an unnamed protagonist who, although initially lonely, discovers the ways in which the world is connected. The exhibition’s layout features multiple possible endings accessed through winding and even overlapping passages, some of which could lead visitors to books that are very rarely read.

Each of the books is handbound by Laustsen using Coptic stitching, a choice of approach that had more to do with unexpected technical limitations.

“If you open up a relatively thick hardcover book, you’ll notice that you can’t get the pages to lay flat, so it’s hard to actually get the speaker in there and let it fit without the pages catching on it,” says Laustsen. “This was the thing I only found out through trying it and going, ‘uh-oh — this doesn’t work!’” 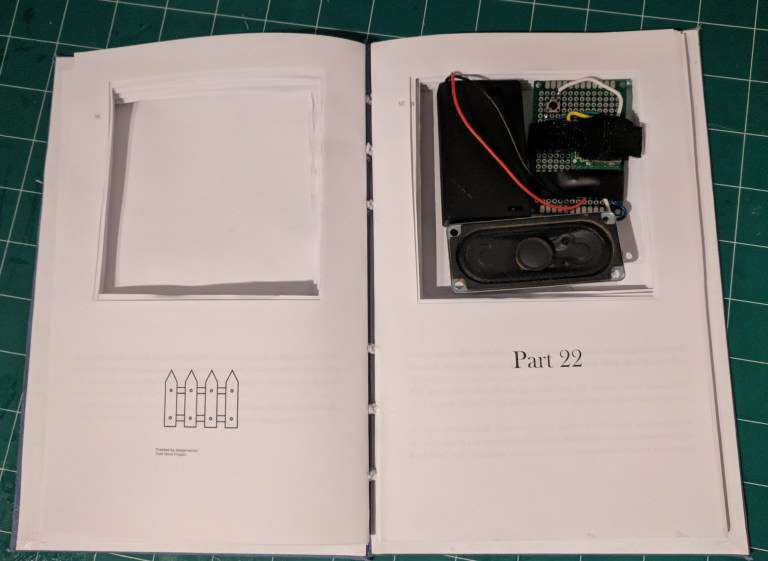 But in binding each book by hand, Laustsen says a happy “accidental symmetry” occurred with the exhibition’s larger themes of wiring and connectedness. Unlike the usual motifs of the CYOA genre, Lausten notes that “Wires” is not a swashbuckling adventure work. Rather, it’s about the subtle and understated experience of “exploring a small world.”

This intimate adventure is also specifically designed for intimately small audiences. Admission is free, but “Wires” will be shown to small groups on March 2-3. Walk-ups are welcome though reservations can be secured at wires.lownote.net/tickets.

“It’s really all about the interaction,” Lausten says of the exhibit’s limited viewing design. “This is sort of a project for an introvert — for a person or a couple to experience on their own.”

“Wires” will be presented in other locations around Austin in March, with specific dates and locations to be announced.

On the heels of mainstream CYOA projects like Netflix’s “Black Mirror: Bandersnatch,” or plot-interactive video games like “Life is Strange,” “Wires” is another example of an entertainment medium adapting to meet a new desire for interaction. Laustsen notes that this resurgence of choose your own adventure elements in art and popular culture is in line with the boredom today’s audiences express with traditional, and passive, entertainment frameworks.

“I think it has a lot more to do with how our society is wired today. More than anything, I think we are not used to just sitting and repeating so much anymore,” he says.

In embracing branching story paths, interactive musical elements, and an intimate setting, “Wires” will give its visitors the opportunity to be active agents within an artistic expression — to create and to understand the connection between a story and its music.

“We all want to be doing something,” says Laustsen. “We want to be a part of that experience.”