Facebook
Instagram
Linkedin
Home Art What to Do with All the Matter in the World: Shanie Tomassini’s... 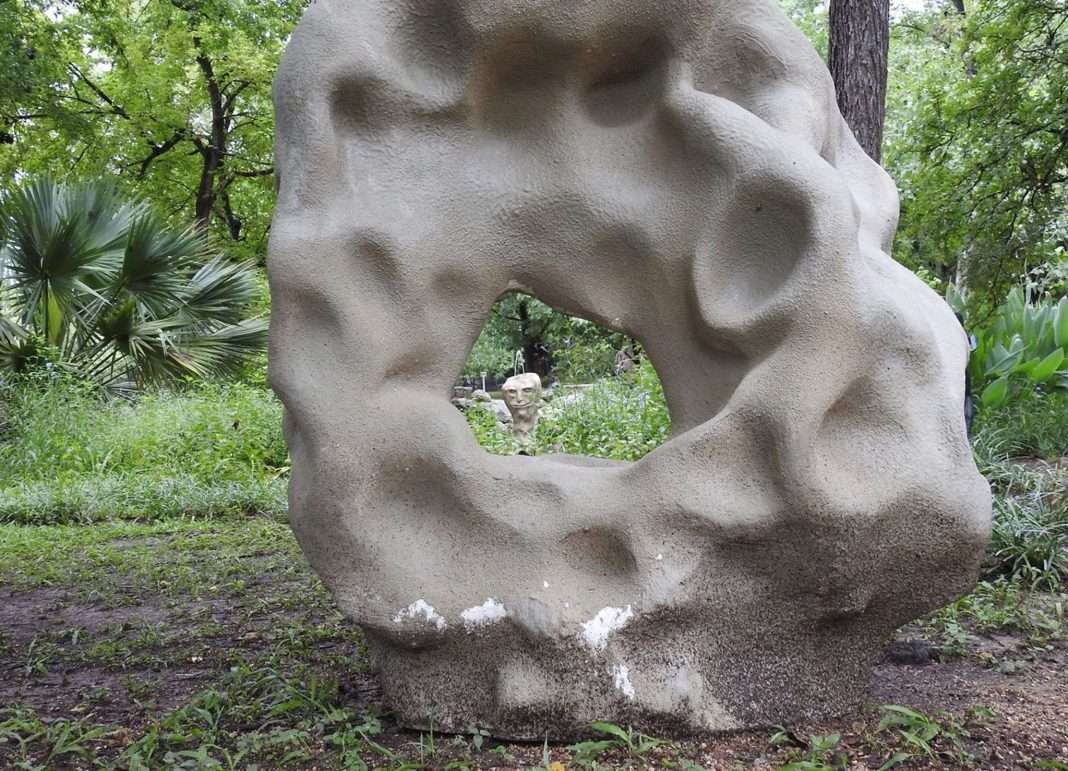 We’ve had an unusual spate of rain lately in Austin. Over the last several weeks, there’s been a downpour nearly every day and things are growing like mad. Locals are concerned about the onslaught of mushrooms and overrun lawns.

For the sculptures in Shanie Tomassini’s Umlauf Prize show, “Slippery Clump,” however, these are the perfect growing conditions.

An MFA student studying at the University of Texas at Austin, Tomassini won this year’s Umlauf Prize, an award granted to an exceptional student in sculpture. The prize includes a solo exhibition at the Umlauf Sculpture Garden and Museum.

Tomassini’s resulting work comprises monolithic relic-like sculptures that engage with the forces of nature. They are incubators for natural growth, yet their subject matter mainly refers to mundane and forgotten facets of modern technology.

The show is situated both indoors and out among the established sculpture garden, which features mid-century figural work by the institution’s namesake, Charles Umlauf. The indoor portion at first looks ramshackle; the sculptures all lie on top of an enormous tarp and hoses are hung from a wooden armature above them. Orange utility buckets sit nearby to store surplus water.

Taken all together, these home improvement store materials nevertheless indicate Tomassini’s subtle mastery of engineering. Acting as a sort of experimental large-scale terrarium, the water that is misted down on the sculptures from the hoses and the tarp held up by wooden rails and bungee cords, maintains a humid environment, ideal for hosting new organic life.

The promise of new life that Tomassini hopes to fulfill will not be an easy task, especially over the short run of the show, as the sculptures are each covered in a thin layer of sprayed cement. Rootless plants like moss must cling to this inhospitable surface. When I visited the show in mid-September, some had already sprouted in between the keys of the oversized hunk of a laptop, entitled “The Internet.”

Outside, Tomassini’s sculptures are beholden to the elements, as unpredictable as they are in Texas. A donut that looks as though it’s been repeatedly punched and an otherworldly radio device convene under a grouping of trees, at once shrouded and susceptible to precipitation from the overhanging leaves.

An incredible piece, “Janus Genius,” installed in the middle of a small pond where Umlauf’s “The Kiss” is normally the focal point, doubles as a fountain. In the round, it offers a multitude of vantage points. The tree-lined path encircling the pond incorporates them all as the sculpture shifts from one face etched out on one side to the bulging profile of another face on the next. The constant stream of water pouring over the sculpture (another testament to Tomassini’s engineering skills and willingness to experiment) will hopefully encourage an array of colorful moss and algae to grow throughout the run of the show.

Tomassini’s process is itself a cycle of growth and decay. Beginning with a set of miniature prototypes of the sculptures that would eventually become larger-than-life, Tomassini radically expanded their size and scale by first creating digitally enlarged mockups. The basis of the final product is a foam shape whose contours were precisely cut with a CNC router and finally, sprayed with that final layer of cement.

Theoretically, the pieces could return completely to nature, be reclaimed and eaten away by the elements and disappear forever. For Tomassini, that seems to be a conscious decision. Remarking on the various phases of human consumption that are visually compressed into a two-month frame in this exhibition, she says that, normally, “The time frame is just too great.”

We will never truly comprehend the manipulations we’ve made upon the planet within the blip of our lives here.

Many of Tomassini’s key insights are recorded in the essay she wrote for the brochure that accompanies this show. Surely, the well rounded and widely reaching ideas behind her work bolstered her chances for winning this year’s prize show, juried by renowned artist Sedrick Huckaby.

Huckaby by trade isn’t a sculptor and the Umlauf Prize hasn’t always only awarded sculptors. However, Huckaby and Tomassini were perfectly paired to respectively judge and receive this year’s award. Known for his thick impasto paintings, Huckaby treads a line between the two media, with a deep appreciation for the quality of surfaces that Tomassini shares.

Tomassini holds the belief that sculpture can be made from anything, saying that “[the anatomy of my sculptures] carry the idea of a deeply malleable state within the constraints of a specific area. They are a series of infinite possibilities inside a given space.”

Though the materials and process are identical among all the pieces in this show, their final forms are dependent on the kinds of objects Tomassini finds significant, as if she’s fixating on arbitrary doodles of what she daydreams about. Some of those things, the flip phone for example, have come and gone within her lifetime; some things (the plant) will always be here. Others are possible manifestations of personal anxieties — the two-faced towering man who is impossible to fully read.

In any case, the hope is that her sculptures will all be subsumed one day and that their meaning will change from tangible recognizable things to artifacts, lost to time.

The Line-up: Nine exhibitions to see in November