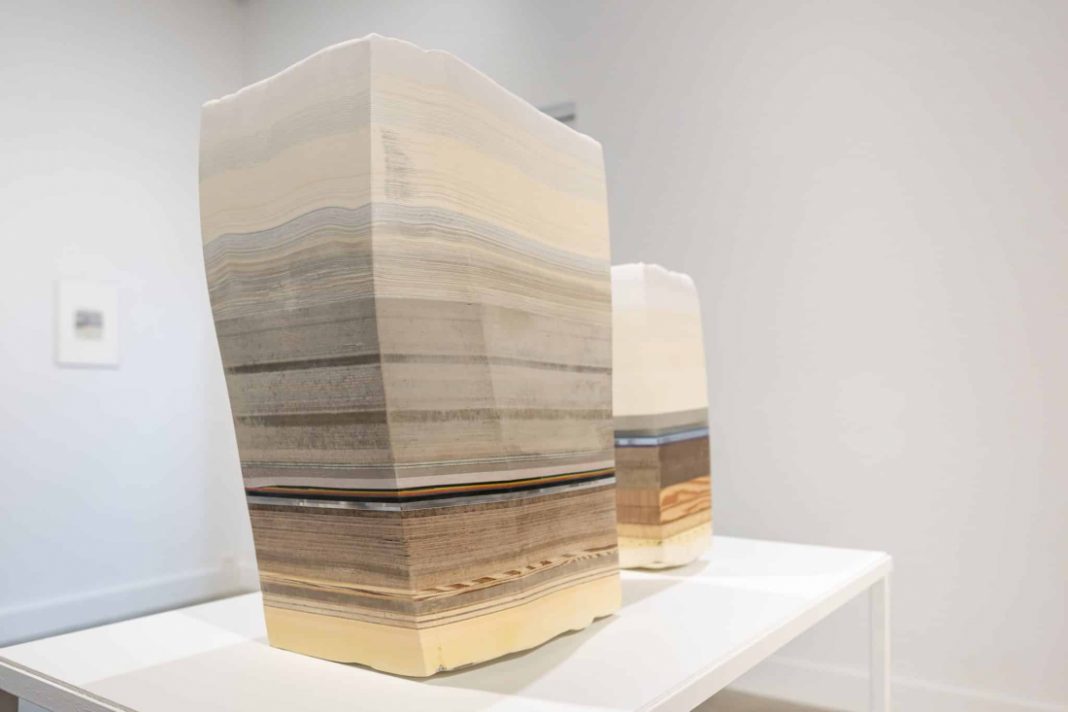 “I have a very small space to work with,” remarks artist Bethany Johnson as she shows me into her home, a compact backyard B-unit in East Austin that she and her partner recently constructed themselves.

The space of the open-plan second floor is almost evenly divided between the artist’s studio and her bedroom. Her built-in desk receives soft, cool light from the room’s northeast-facing windows on the overcast day of our visit.

Upon a set of steel flat files, Johnson has arranged her most recent sculptural works. “You can see how the table is bowing,” she says. “Compressed paper ends up even weightier than wood, because it’s so dense.”

Johnson is originally from Wisconsin and attended Kalamazoo College in Michigan for her B.A. She moved to Austin to earn her M.F.A. at the University of Texas in 2011, and now serves on the faculty at Texas State University in San Marcos.

Compression is, in fact, the sole force by which Johnson’s assemblages physically cohere. They are composed of reclaimed materials — used paper, plastics, wood, and metal — that would otherwise have been recycled or sent to the landfill, held together by a hidden interior network of screws and washers.

A portion of Johnson’s reclaimed sculptural materials are cast-offs of her own household use; however, some of the colorful stripes in her final work (listed among her materials as “plastic”) began as storage bins left out for bulk trash pick-up.

“I have a map of where bulk pick-ups take place, and so sometimes I’ll cruise those in that neighborhood,” she says. “The only place that I actually purchase stuff is the [thrift store] bins. It’s basically the outlet before everything gets sent to the landfill — things that they can’t sell.”

She cuts her scavenged materials to dimensions she has standardized with wooden templates. Then she arranges them, clamps them together, and drills holes so she can insert a metal armature of all-thread and screws. Once those are in place, she uses an impact driver to tighten threaded nuts at top and bottom. Then she smooths each side with an electric hand plane and a belt-sander to give them their polished, uniform surface.

At first glance, I was tempted to believe that Johnson had treated the lighter-hued zones of each multi-layered block with a waxy resin coating, or some other adhesive that would account for the smoothness of the surface-texture. I have the sense that I am seeing the outermost surface of a carved and polished solid material, striated like agate, but satin-matte like marble. The unity of the block only begins to fray at the top-most edges, where a final white stratum crisply wobbles into recognizability as paper.

“The rules are, for me,” she says, “that the materials stay themselves in terms of their surface qualities, both on the face and on the tops.”

Johnson had already employed vertical stacking as a compositional strategy in her two-dimensional works when she arrived at her current method for constructing sculpture. Her collages consist of bands of color and pattern derived from found nature photography and scientific diagramming, often superimposed with her own disciplined mark-making in ink.

“I was doing the collages and finishing the house, so I had these unrelated thoughts about material and collage,” she says. “This is a fairly small house, and I felt really distressed with the incredible amount of construction waste, [even though] I was trying to buy really tightly (This work) came out of these ideas of what to do with all of these construction off-cuts.”

Her concerns about her own ecological footprint extend to the energy she consumes in the actual crafting of her sculpture.

“I do use a lot of electricity to make these with all the sanding and stuff,” Johnson admits, “and that was bothering me, and I just learned about this program in Austin, and you can sign yourself up for 100% wind energy, so I did that to help me feel better about the logic of the thing.”

Johnson calls herself “a worrier, in particular in regards to the environment and climate.” And as an artist, she finds herself “coming at that worry obliquely, or [paying] attention to nature and the natural world from a more cerebral sense.”

Her new group of sculptures, dense with human-made materials, conjure core samples from an Anthropocene age. The stacked and tidied scraps presented at actual-size in her “Findings” series come to resemble the diagrams by which scientists represent billions of years of geologic activity in miniature.

In formal art terms, the concept of “deep time” has to do with scale. Art and architecture are traditionally understood in terms of their relationship to the size of the average human body. In deep time, all of human history (art included) becomes relatively insignificant.

Johnson’s presentation of found human-made materials among her “Findings” has them undergo a similar scale-shift. Pages containing millions of words representing decades of thought are recontextualized as horizontal color fields in different shades of off-white.

As a colleague at Johnson’s self-made artist residency at the McDonald Observatory told her: “We’re all just a seam of hydrocarbons in the geologic record.”

Johnson’s work will also appear in “Texan Artists: Women of Abstraction” at The Art Museum of South Texas in Corpus Christi through May 8, artmuseumofsouthtexas.org

Jeannie McKetta
Jeannie McKetta is a doctoral candidate in Modern and Contemporary Art History at the University of Texas at Austin, where she also completed her MA and BA in Art History (2012, 2007) and her BFA in Studio Art (2007). The subjects of her dissertation are the artists Vija Celmins and Giorgio Morandi as still-life painters in the post-WWII period. Generally she enjoys studying phenomenology, language, Italian art history, and how artists make what they make.