Twenty-five Years Strong, the Miró Quartet is a Living Tradition

Having to share a birthday with one of history’s most-favored composers would understandably give most people a quarter-life crisis. But not the Miró Quartet.

On the cusp of their 2020 season, the Austin-based, internationally renowned Miró Quartet will soon celebrate their 25th anniversary. Originally established in 1995 while students at Oberlin Conservatory, founding members Daniel Ching (first violin) and Joshua Gindele (cello) were eventually joined by John Largess (viola) in 1995 and William Fedkenheuer (second violin) in 2011. Now with a quarter-century legacy under its belt, the Miró has taken a beat to consider what it means to have been performing, teaching, and recording for so long.

“Every season, the quartet is always coming up with projects that interest us, pieces we want to play, different ways of bringing those out in front of the audience, so in a way, we’re doing what we do all the time, but it is different to have a chance to really look back and reflect,” says Largess.

“Twenty-five years is a long time, and it went by pretty fast!”

But instead of resting on their lengthy laurels, the Miró is instead attacking their anniversary with a series of projects and performances that are a testament of their constant pursuit of evolution and responsive musical stewardship.

“When we first sat down and talked a few years back about how we wanted to celebrate our 25th anniversary and what that means to us, the two things that came up were passing on 25 years of repertoire to the next generation — that’s part of what we do at UT, with other projects, and master classes we do all over the world — and how we’re really aware of how lucky we were to have the mentors we had,” says Largess.

“We would not be the group we are musically and personally without the people that helped us at the beginning.”

In seeking to honor past teachers the likes of Michael Tree, Kathleen Winkler, and Serban Rusu, as well as the rich history of the American string quartet at large, the Miró came up with the Quartet Archive Project, an ambitious three-part touring presentation in which they will revive select quartet programs from the years 1910, 1929, and 1935. The programs will be reanimations of those performed by the seminal groups the Kneisel Quartet, the Flonzaley Quartet, and the Kolisch Quartet, respectively.

The differences in repertoire and format will provide starkly altered experiences for audiences used to contemporary programs. And for the Miró, this element of live-discovery and the sharing of aural histories is at the heart of why they love to perform, as Largess notes that “even though we just released the largest set of recordings we’ve ever done in 25 years, we are the first to say that recorded classical music is two-dimensional — it’s flat.”

“Our art form is a live, acoustic art form. It’s meant to be in a room where the listeners’ eardrums are touching the air that touches the strings of our instruments. If we don’t do what we do in front of real people, even if there are recordings or videos, the experience is going to die,” he reasons.

Another history the Miró is revitalizing for their anniversary has an anniversary all its own, albeit a bit older. The year 2020 will also mark the Beethoven’s 250th birthday and alongside it, the Miró’s most extensive recording project to date — Beethoven’s complete string quartets.

“In a lot of his other music, like the symphonies, vocal music, and opera, there’s an element of his public face in those,” Largess says, “It’s not as personal and intimate as the quartets all are, and I think you really see the vulnerable, sometimes ugly, distressingly beautiful side of a human personality in those pieces, and he was kind of the first composer to really do that.” 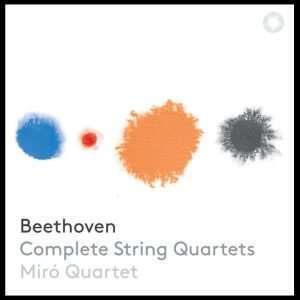 The recently-released album was a massive undertaking, utilizing both brand new and remastered recordings of the Miró Quartet, as produced by the Grammy award-winning producer/recording engineer Da-Hong Seetoo. Originally, the Miró planned to record the cycle at the corresponding ages of when Beethoven wrote them, matching the players with the shifting maturity and life experience of the composer. While this was an immensely rewarding both personally and creatively when they did their first recording of the Opus 18 in 2006, the math of it all didn’t end up being practical.

Largess muses “that was sort of our plan…and then we said, ‘well, are we going to wait 15 years to record the late quartets or not?’”

For their interpretation of the cycle, Miró left no stone unturned and no staccato undiscussed, especially when working on Beethoven’s late string quartets, which even today are infamously unclear and wide-open to interpretation.

“None of the big publishing houses really want to do an authentic edition — because you can’t. There are conflicting sources, he died before they were published, and he notoriously went through and changed everything after finishing them,” says Largress.

“So we did have to make some decisions: are we going to play this version from the manuscript or this version from the first edition? What does that slur really mean? Does that make sense with how we played that passage a few bars ago? And that’s just technical stuff, the other part is, alright, what’s this really about? What is he really trying to say?

But while this collection is extensive and exhaustive, Largess makes it clear that in true Miró fashion, the work is never truly done. In speaking about Beethoven and the goals of musical study and performance, he says their interpretations are not aimed to be infallible, definitive goal-posts, but are instead evolving pursuits that vary with time and experience.

“These pieces are mirrors of humanity and the human spirit, and when we have more life experience to bring to them as we listen and as we perform, we hear that experience in the quartet,” he says.

“I can’t have an 80-year old soul now, even if that message is in the music!”

When performed live, the pieces take on an even more dynamic form that is likely to vary every for every concert. During rehearsals, the ensemble meticulously learns each other’s parts and comes up with several combinations of interpretations for the text, leaving the exact results of some passages to be determined live on stage. Even when dealing with a storied institution like Beethoven’s works, Largess says that not pinning down every aspect of the pieces they perform creates an energy that is palpable to audiences, and is also vital to the group’s identity.

“The point of going over the text in rehearsal is for us to create a shared concept for the four of us to live in,” he states.

“It can’t just be, ‘we’ve decided how to execute it, let’s try to execute really great tonight.’ That limits the energy of the performance in a way that really kind of alienates the audience. For us, that’s not even that fun or rewarding, because we’re not given the space to really explore our own inspiration, and also the composers inspiration too. We love to try to keep that spontaneity and creativity open in the pieces that we perform. That’s true for everything, including Beethoven.”

Between their Beethoven recordings, Quartet Archive Project, and even more to-be-announced programs, the Miró Quartet finds themselves as busy as ever 25 years on, which they find both surprising and exciting.

“It’s also a little funny to be thinking about five years from now, and I look at the calendar and I see two years of Beethoven cycles and archive project and doing all these different things, it’s like, wow, there’s really something after this?” Largess coyly questions.

“In a way, doing the 25th anniversary season kind of makes us feel like, okay, we’ve accomplished all this stuff — clean slate — what do we want to do now?”

Live on Stage, but Online, the Miró Quartet Plays All of Beethoven’s String Quartets