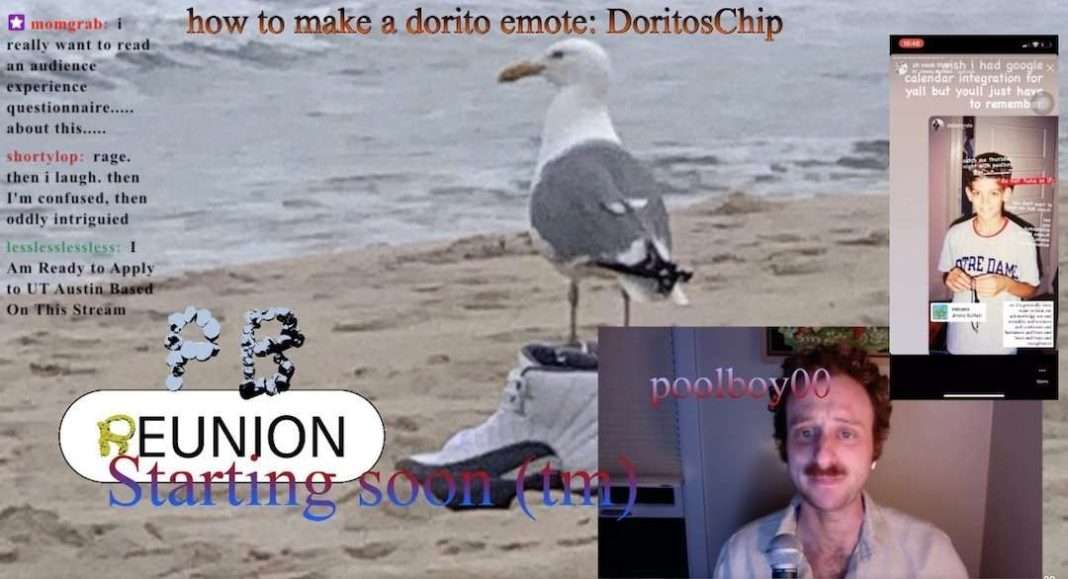 The burning question on theater-makers minds lately seems to be “how do we combat the audience’s Zoom fatigue?” While we’ve seen ensembles present radio plays, plays by mail, and in one case, a drive-thru performance, others are instead embracing the online model, leaning into the format with utter conviction.

While we have seen some truly impressive pivots to an online performance platform from the University of Texas’ Theater and Dance department, including the impactful and heart-wrenching production of “La Ruta,” the latest to come is… let’s say distinctive.

A thesis performance project from Michener Center for Writers fellow, Sam Mayer, “poolboy00” is an online interactive production that presents a vastly different approach from really any virtual staging we’ve seen so far in 2020.

While the project may at first sound like a study in banality, the character of poolboy00  isn’t for the faint of heart. Uncensored and unfiltered, Mayer’s online alter ego hammers both his guests and the audience with off-the-cuff musings on sex, bodily functions and other intimate and vulgar topics with a standup comedian’s pace. Credit where it’s due, Mayer’s effortless charm ensures his character’s streams err toward the side of outrageous than the unpleasant, even when he’s burping loudly into the microphone (and he burps a lot).

Because this particular stream is hosted as a part of UTNT (UT New Theater), this past weekend’s “poolboy00” production featured a sense of urgency that set it apart from the previus eight weeks. Given that Mayer has stated that his project is inspired by his favorite reality series, the “Real Housewives” franchise, poolboy00 modeled his two-night performance after a reality show reunion special. Co-hosted this time by Steele, “poolboy00 reunion” — as it was referred to within the stream — reflected on the project’s overall process while also checking in with past guests.

Over the course of two nights and more than five hours of streaming, Steele (using the online handle passerby_00) offered personal insight into the project and attempted to wrangle in poolboy00’s manic energy with guiding questions. Try as Steele did to muzzle poolboy00’s usual chaos with structure, the co-host’s questions oftentimes descend into poolboy00’s signature hijinks, including a time where Mayer read aloud an outline of his self-authored Kamala Harris/Mike Pence romance novel, and another moment where Mayer proudly displayed six weeks worth of fingernails he’d bitten off.

Through all this attention-seizing vulgarity, however, the project’s climax also teased a more vulnerable side of our host, in between his burps of course. The human that the character of poolboy00 serves to mask (or at least distort) came out most when Mayer reflected on his own relationships and occasional feelings of isolation, and was also particularly palpable in the heavy pauses that followed hard-hitting questions like “Do you think you hurt anybody while doing this project?”

These introspective moments were supplemented by edited highlight reels of clips from the project’s eight-weeks of streaming. While these reels largely provided a behind-the-scenes look into the madness, they also featured some more human moments, including what seemed a confession of infidelity from one guest, and a truly moving conversation between Mayer and a friend regarding their inability to open up about their feelings.

The final key to the production’s success came from an unseen but nonetheless vocal third participant, the audience, who opined on — and in many cases directed — the show with text comments that were projected onscreen. Interactivity, I’ve come to find, is a tricky thing in performance, especially when it’s demanded. (For further reading, see The Onion’s article on the subject “Oh No, Performers Coming Into Audience”). For this reason, and for the sake of critical detachment, I opted to watch the stream without interacting — at least at first.

As poolboy00’s outrageousness carried on, though, the possibility — nay, the inevitability — that each audience member’s input would be seized in some way by Mayer’s character, and, as a result, directly affect the show became increasingly appealing. Soon enough, I found myself “jumping into the pool” as Mayer/poolboy00 called it, participating in audience polls, and even cracking open a cold beer from my fridge to get the full effect.

That combination of unpredictability, vulgarity, and interactivity is what makes poolboy00 an engaging experience. You can’t help but feel inspired to jump into the chaotic world Mayer has crafted.

Throughout the show, to what degree the character poolboy00 and Sam Mayer the person are different entities (or if they even are at all) came up a lot. While Mayer coyishly implied the answer can only truly be found in watching the entire backlog of nightly streams, I’d have to believe the answer was right in front of me. The reason I enjoyed participating seems to be the same reason poolboy00 was so enjoyable to Mayer (at least for the most part). On this stream, we’re able to be our true selves and do what many of us already do on a daily basis — act as a fool on the internet.

Trey Gutierrez
Trey Gutierrez is an Austin-born writer, editor, and producer. He currently serves as a writer/producer for the El Rey Network television show “United Tacos of America” and regularly contributes to such publications as Texas Monthly and Texas Music magazine. He currently lives in Austin with his partner and their Chihuahua-mix, Roo.

Theater Review: Bottle Alley’s ‘We Have Always Lived in the Castle’