It took decades for the author to grapple with whether or not she should write a novel about Cathy Williams, a one-time slave who disguised herself as a man and served with the Army's legendary Buffalo Soldiers 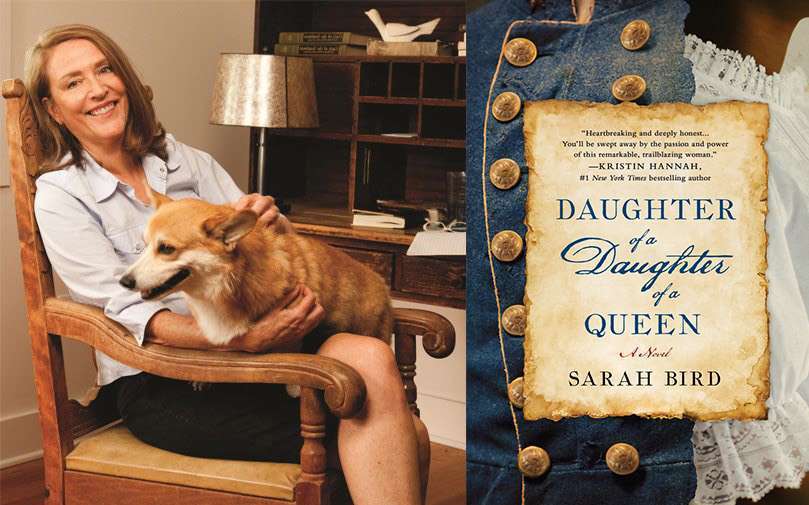 Recently, Sarah Bird celebrated the launch of her latest novel, “Daughter of a Daughter of a Queen,” at Austin’s new downtown public library, speaking before a a crowd of several hundred and joined by longtime friend and retired public school educator Pam Black. “Daughter of a Daughter of a Queen” (St. Martin’s Press, $27.99) is Bird’s tenth novel and one that has been percolating in the author’s mind for almost the entire length of her career. I recently had a chance to ask the Austin-based author a few questions about the book.

At the Texas Book Festival, Bird discusses “Daughter of a Daughter of a Queen,” 1 p.m. Oct. 27 in the Texas Tent (Eighth St. and Congress Ave.).https://www.texasbookfestival.org/schedule/

DALIA AZIM: I would love to hear you talk a little bit about the story of this story. I know that you first learned about the real-life heroine who inspired this novel, Cathy Williams, about forty years ago. Can you tell me about that?

SARAH BIRD: The story fascinated me from the first moment I heard about Cathy/Cathey/Cathay Williams’s extraordinary accomplishment. At the time, in the late 1970s, I was photographing and documenting African-American rodeos. My imagination was seized by the tale of a slave who, at the end of the Civil War, made the decision to reject the life of servitude she would have had as an uneducated woman, and enlisted with one of the six new regiments formed by the U.S. Army. If this story were true, I thought, then Cathy Williams was the first woman to serve in the regular U.S. military. Though hundreds of women had passed as men during both the Revolutionary and Civil War, I had not heard of any who’d done so during peacetime. And to pull that off under such harsh conditions amazed me.

DA: Was it partially your family’s military background that drew you to this story?

SB: Undoubtedly. As the daughter of a career Air Force officer and an Army nurse who served from Casa Blanca to Marseilles, I grew up on military bases around the world with an understanding of the power of a uniform, the power of the salute, the power of the military to transform a life. I felt a special affinity with this woman —Cathy Williams — who shared that understanding. I tried to learn more about her, but this was back in the days before the internet, and I found no trace of “Cathy Williams, Buffalo Soldier” in any library that I searched. So, I assumed the story must be apocryphal.

DA: At your book launch in Austin you were interviewed by Pam Black, who when you originally met her was public school teacher at a predominantly African American kindergarten in Austin. How did Pam help bring Cathy Williams back into your life?

SB: In 1988, while pregnant with my son, I attended a childbirth class taught by Pam. When she learned that I was a novelist, she told me I “had to” write a book about a forgotten hero that her students, especially the girls, needed to know: Cathy Williams. I told her that, sadly, this marvelous story was apocryphal; there never was a female Buffalo Soldier. Pam said, “Oh really?” and, at the next class, she handed me copies of Cathy’s enlistment certificate, discharge, her application for a pension, and all the notes she’d taken from her conversations with Barbara Richardson whose father had lived at Cathy’s boarding house in Trinidad, Colorado. Thrilled to know that she was real, I quickly hunted down what else I could find of the little documentation exists about Cathy Williams.

DA: I know that this novel had a once and hopefully future life as a screenplay. In 2015 you were chosen, based on your screenplay “Daughter of a Daughter of a Queen,” as one of the inaugural participants for Meryl Streep’s Writers’ Lab for female writers over 40. Can you talk about how this experience might have breathed new life into a project that had sat on the proverbial backburner for years?

SB: Right. So, I couldn’t put aside the feeling that I was not the one to write this book, which I thought should be written by an African American. Ideally an African American woman. So I kept pushing the story away, but Cathy kept coming back to me. After an earlier novel was made into an utterly forgettable film, I lost interest in screenwriting for a long time. And then I realized that it was the perfect medium for telling Cathy’s story, since the story would be told by the actors and director.

So I wrote the script, and it led to a ten-year career as a screenwriter during which I was hired for all manner of projects and took dozens of meetings about “Daughter.” Though there was always enthusiasm and agreement that this was an important story that needed to be told, the consensus was that it was never the right moment for the film to be made. Fast forward to 2015, when I learned about Saint Meryl’s contest and submitted “Daughter.” They had 3,800 entrants. I was one of ten selected. Upon having this wonderful opportunity to revisit the screenplay, I realized I still loved Cathy’s story and wanted to tell it.

DA: You and I have talked a bit about questions of cultural appropriation in art, to use a term that’s burning hot right now. Can you tell me a bit about how you reckoned with that anxiety in writing this narrative, and how you ultimately ended up writing from Williams’s imagined perspective?

SB: So, at this point, I’m 65-years-old and the novel I’ve been expecting someone else to write for decades still has not appeared. Given that Cathy Williams’s story had been publicly recorded since 1878, when a lengthy interview with her appeared in The St. Louis Daily Times, I sort of felt Cathy’s patience running out. I hoped that by telling my version of her story, it would inspire other versions, other novels, I certainly never overcame my anxiety about stepping into this highly-fraught arena. In the end, though, I decided that if I wasn’t strong enough to take the criticism that was sure to come, then I probably didn’t deserve to tell Cathy’s story. Also, by this point, after trying and failing to write four other novels, I sort of felt as if I had no choice in the matter.

DA: At your book launch in Austin you referenced the essay “Getting In and Out: Who Owns Black Pain?” by Zadie Smith, who I agree is one of the most brilliant writers and thinkers of our era. Here Smith unpacks some of the controversy surrounding the display of (white artist) Dana Schutz’s depiction of Emmett Till’s dead body in “Open Casket,” which set off a firestorm of controversy around the 2017 Whitney Biennial and the inclusion of Schutz’s painting therein.

When considering whether her multiracial children would have the culture’s permission to depict such a subject, Smith writes “shouldn’t white people like my children concern themselves with the suffering of Emmett Till? Is making art a form of concern? Does it matter which form the concern takes? Could they be painters of occasional black subjects? (Dana Schutz paints many subjects.)”

I would love to hear your thoughts on this as it relates to your novel.

SB: Yes, I found that essay quite reassuring in that, for Smith, the bottom line is to judge based on the work. We are in the middle of a long overdue, very necessary conversation that has not yet been resolved, but one which is making us all more conscious.

DA: Can you talk a little bit about the “rules” you established for writing this historical fiction? What did you decide to alter from actual history in your novel and why?

SB: Yes, from very early on I knew two things: that Cathy had served in the infantry and that she was a foot soldier. And I knew from my own very insistent muse that I wanted to put her in the cavalry. I was torn about the “rules” of historical fiction and decided to consult with an expert, the acclaimed historical fiction novelist and my friend, John Pipkin. I put my dilemma to him and and he said, “Sarah, my rule is: You can do anything that is plausible within the limits of the time and your research. If you can justify it, you can put Cathy on a horse, but you can’t have her piloting an airplane.”

I knew I had to construct a way to get Cathy mounted up, because, also, honestly, I didn’t want to write about the 1,200-mile slog from where she trained in the Jefferson Barracks near St. Louis down to her first posting at Fort Bayard in southern New Mexico. The matter of her posting brings us to the second major change I made: to move Cathy from southern New Mexico to Fort Davis in West Texas. I did this for two reasons. The first is that Fort Bayard was constructed of adobe and has long since melted back into earth, while Fort Davis, which was the regimental headquarters for the Ninth and Tenth Cavalry, remains a perfectly-preserved reconstruction of a working fort.

More than that, though, I wanted to comment on Texas’s submerged and, relative to the other Confederate states, unacknowledged history as a slave state. There are several important stories I wanted to tell by writing this novel, and this was one of them.