When we toss things out, or throw things away, where exactly is ‘out’ and ‘away’?

“The Plastic Bag Store,” a multipart installation, immersive film screening, and live performance conceived by artist Robin Frohardt, asks this question, illuminating the comic depth of our habituation to consumer culture. Through surprising disruptions, clever punch-lines, and thoughtful puppeteering, “The Plastic Bag Store” pokes fun at the ease with which we produce and discard lasting materials, particularly single-use plastics.

Presented by Texas Performing Arts, the interdisciplinary work first appears to be a full-scale reproduction of a regular grocery store, and the audience is welcome to browse and inspect the merchandise. Shopping comes naturally for us, and we comfortably begin to pick up fruits and vegetables, only to notice that almost the entire inventory has been replaced with replicas made from colorful plastic bags. I grab a knob of garlic, and I admire the familiar weight of the object in my hand, and the way the white plastic crinkles in such a way that conjures the papery skin of real cloves. 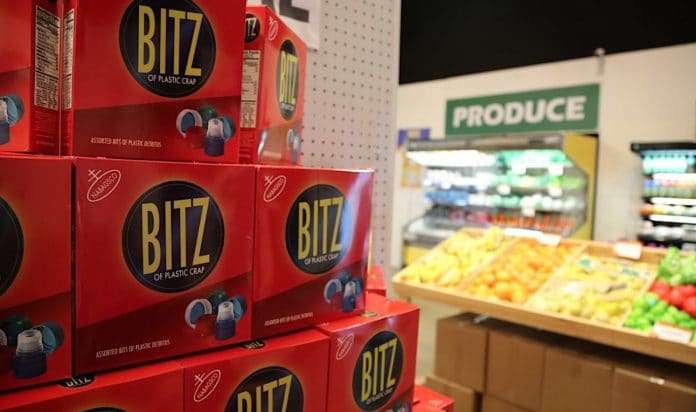 Aisles are stocked with boxes of cereal. In place of Captain Crunch, we find “Caps N’ Such”; Lucky Charms, “Yucky Shards.” Large advertisements for “Bagweiser” and “Tabagsco” are posted on the wall. A magazine stand brims with issues of bag appétit and copies of Baggs, the “World’s #1 Bag Mag,” whose cover boasts bold teasers: “Teen Bags Bare All!” and “Dirty Double Bag Inside!”

An announcement from overhead alerts shoppers that the one-hour performance is about to begin, and employees in blue aprons push the aisles to the wall while we find seats on tricked-out cardboard boxes that the staff quickly slide into place. A projector screen drops, and a three-part faux-documentary, acted out entirely by puppets, recounts a history of single-use plastic. The film begins in the ancient past and finishes in the far-off future ice age that’s described jokingly as “after the robot wars.”

The most compelling part of the film lies in the impeccable puppeteering, especially the performance of a middle-aged character named Helen, a janitor at a New York museum. We see Helen slowly mopping the museum floor, and then collecting pieces of plastic refuse on her commute home. Bag in tow, she pockets an array of items: a crinkled lid and straw, a plastic six-pack holder, and a long CVS receipt.

Magnificent details, like the slowness with which the puppet removes her shoes and massages her sore feet as she arrives home, or the sensitivity with which she inspects and then nods her head shamefully at each piece of trash, stir genuine empathy for the inanimate figure. Frohardt captures the private thoughts that most of us who care about the planet, or at least fear climate catastrophe, entertain. We witness and simultaneously experience Helen’s disappointment; we sympathize with her quiet efforts to combat the pollution we take part in creating; and we admire the responsibility she takes upon herself to protect and improve the places we live, even though we understand her impact to be small.

Entertaining at face value and truly accessible, “The Plastic Bag Store” panders to a wide audience and is easily legible. Yet at times it trades insightful observation for the cheap thrill of novelty, leaving viewers to discern from vast and competing elements which ones offer a nuanced look at the materiality of plastic.

While the exhibition takes many opportunities to use repurposed materials in its products, some of the “rebranded” items were fabricated specifically for the installation, seemingly perpetuating behavior that the show precisely aims to critique. However, objects like the garlic, or the elaborately-decorated baked goods — all made from recycled plastic bags — more directly speak to the virtues and uncanny beauty of reuse without the extra noise of sassy slogans. Interactions with these small sculptures stay in your memory much longer than a bawdy joke.

Getting a general audience to engage with performance art often proves difficult, and “The Plastic Bag Store” meets the challenge by making art that’s large and loud, full of hidden surprises, and mostly excessive. Even so, Frohardt demonstrates a creative precision and thoughtfulness that make her work deserving of our time and attention.

In its best moments, “The Plastic Bag Store” plants seeds of curiosity and satire into moments of daily life that could perhaps develop into meaningful change that favors conservation over consumption. It offers a fresh, playful lens through which to look at the culture in which we live, and that is often the mark of true art. 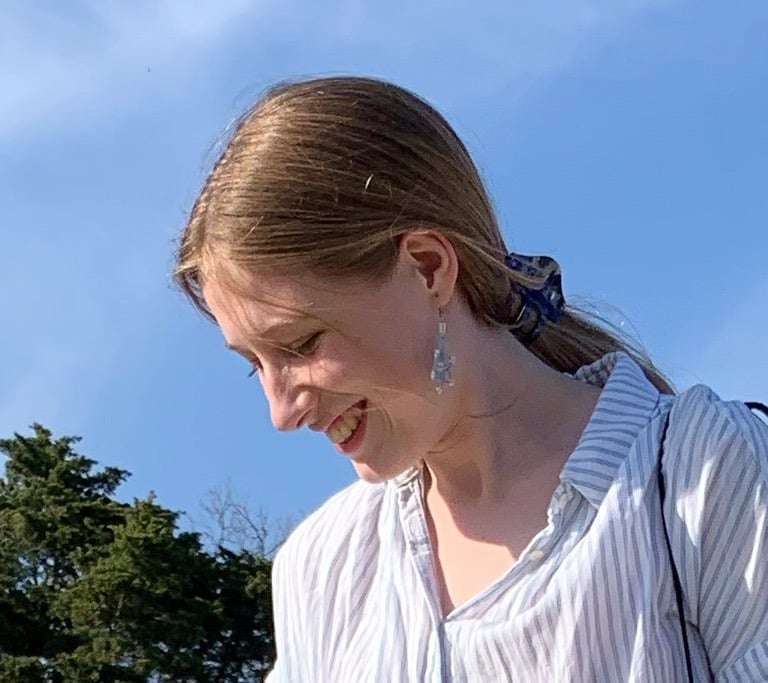