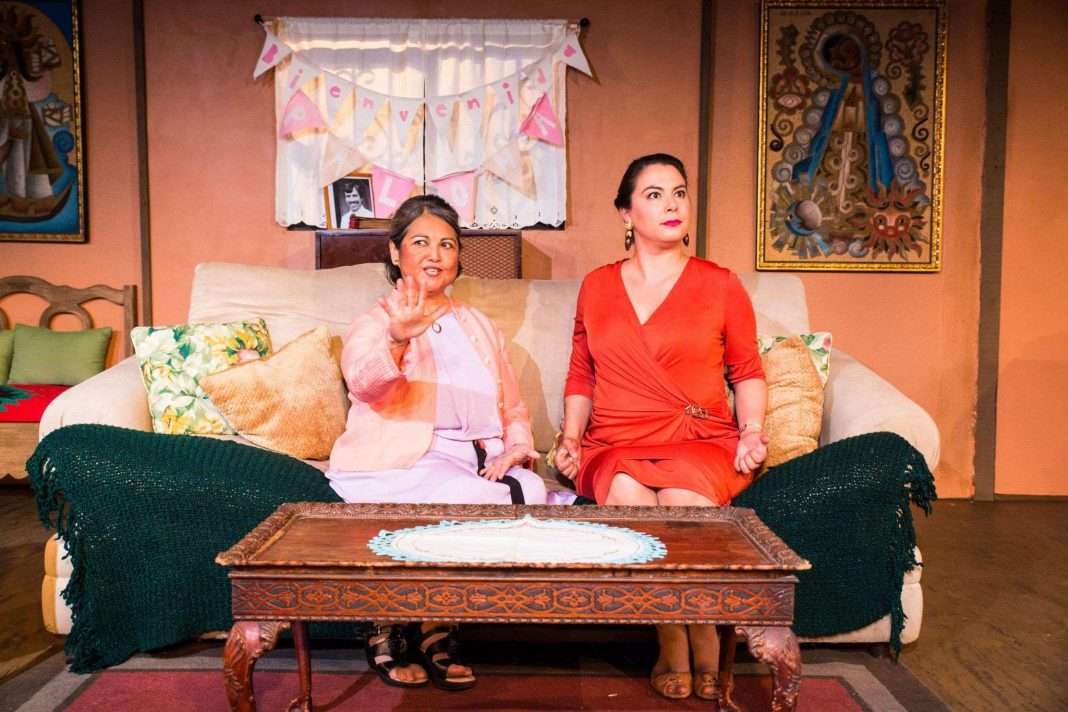 Playwright Stephanie Alison Walker has not assumed that her audience is familiar with the Dirty War — a term the Argentine Military Dictatorship used for a period of state terrorism in 1970s and ‘80s. Of the tens of thousands of “subversive” artists, students, journalists, nuns, and anyone else who spoke out against the right-wing government, an estimated 30,000 were never heard from again, Los Desaparecidos, the disappeared ones.

Walker’s play — presented in Austin by Shrewd Productions as a National New Play Network Rolling World Premiere — is less interested, however, in a history lesson than it is in consciousness-building. The story of “The Madres” begins with the cataclysm of Disappearance and then asks who is left behind. What did their families do? What could they do?

Director Lily Wolff has led Shrewd Productions and an all-Latinx cast into an excavation of one family’s most desperate hour. A respectable apartment in 1978 Bueno Aires, evoked by scenic designer Indigo Rael in rose-hued walls and wicker finishings, sets the scene for Josefina (Mary Alice Carnes) and her daughter, Carolina (Yesenia Garcia Herrington), the two beating hearts of this play.

Amid jibes and snips at each other, we learn that mother and daughter are both reeling from the disappearance of Carolina’s daughter more than eight months ago. Herrington and Carnes thoroughly dominate the play. Both bring unyielding energy to dialogue that could (in other hands) become rote mother-daughter squabbles. Wolff and her actors carefully position Josefina, the consummate homemaker, as woman determined to maintain appearances and operate within the rules of the oppressive regime.

Meanwhile, Carolina signifies another generation’s frustration: she has joined the protesting mothers of the disappeared donning a white headscarf and marching each Thursday around the Plaza de Mayo. It is an act of resistance that carries possibly lethal visibility for a woman who has lost all patience waiting for the return of her pregnant daughter.

A doddering priest and neighbor-kid-turned-soldier fill out the cast with models for behaviors available to men during this humanitarian crisis. Padre Juan (Rupert Reyes) proves the ineffectual inverse to the spirit of the protesters, Las Madres, as he keeps his head down and eyes averted — an attitude of prayer and of self-preservation.

It is, however, the soldier Diego (portrayed with eerie sangfroid by Carlo Lorenzo Garcia) who keeps tight the threat of violence throughout. Costumed by designer Laura Gonzalez in sharp military civilian wear rather than a more blatant uniform, Diego looks and sounds sickeningly similar to right-wing extremist in our own nation and time.

It seems pointed that the playwright and the production cannot assume the audience has even heard of Argentina’s Dirty War. Assistant Director/Dramaturg Clarissa Smith-Hernandez has co-curated (alongside Solaris Ortega) a photography exhibit adjacent to the stage at Santa Cruz Theater, and her efforts to delineate the gravity of this dark period show in the gallery, program notes, and in the performance itself.

So although Benjamin Galvan’s soundscape and Carnes’s general ebullience ably keep lighter moments buoyant, “The Madres” is a play that takes its time to handle the story with respect. ZATERO Dance (Natasha Small and Liliana Zatero) perhaps demonstrates best the play’s commitment to survivors’ strength: two dancers open the performance with variations on the samba and tango, their backdrop the gallery wall of documenting human atrocities.

As they guide the eye from the exhibit space over to the box set, sensuousness becomes suffering, and all movement is abstracted. It’s a prologue replete with worldbuilding yet devoid of exposition. When the dancers exit and Josephina takes the stage ironing, that everyday chore already carries the the weight of her survivance.

Along the gallery floor, hundreds of puzzle pieces are heaped and jumbled a linear pile – azure, white, and handful of gold to represent the Argentine flag. It’s neither prominent nor immediately recognizable as a political symbol.

It isn’t didactic. It isn’t overpowering, but it is moving to become so suddenly aware that what you are witnessing is at once entirely fractured yet packed with meaning.

A drive-thru ‘Odyssey,’ a mystery by mail. Austin groups find ways to make theater without theaters