I’m a comic book fiend. Or at least I used to be.

Since the much-ballyhooed “Death of Superman” storyline in 1992, comic books have been my favorite artistic medium. Throughout all the highs and lows of my life comic books have always been my constant companion. I wrote a dissertation about comics, published a book largely about comics and have maintained an embarrassingly large collection that once topped out at over 100,000 individual issues.

As a credentialed comics scholar who focuses on mainstream comics (which, in the weird, insular world of comic books, equates almost exclusively to superhero and superhero-adjacent comics), there was even a time when I read practically every comic put out by each of the major publishers and kept up a library of every work of comics scholarship ever published.

That all changed this year, because of three major life changes. First, I got married and started to look towards the future more than I ever had before. Second, my wife and I bought a house, which meant taking a long hard look at exactly how many pounds of reading material I wanted to move across the city. Third, I became obsessed with the fear of dying in a nuclear holocaust or, y’know, a Holocaust holocaust, and became a little bit choosier about supporting works of art, in all media, that express the kind of progressive ideals I stand behind.

In essence, as I’ve gotten older and more confident in myself, I’ve found that I’ve needed comic books a little bit less. That’s why this year saw the biggest purge yet of my comic book collection and comics-related books (scholarly texts, biographies, histories, etc.), as well as the massive ramping-down of the amount I buy on a weekly basis.

Of course I still spend a couple hundred dollars a month on comic books, which more than keeps me in the realm of avid reader. But I’m not the same expert on every last detail of Marvel or DC continuity that I was a few years ago. Heck, I can’t even claim, as I once used to, that I’m in the top 100 scholarly experts on comic books. There’s just too much to keep up on, and at a certain point one needs to choose between being a life-long collector/expert/archivist and having the time and money for other life endeavors. This year, I chose the latter.

When I was asked to write a list of the “Best Comics of 2017” I jumped at the opportunity, only to realize I had no clue what those might be. I read fewer comic books than ever this year, mainly focusing on titles I need to keep up with for an upcoming book about the DC Comics “multiverse.” Looking over other lists of the best comics of 2017, I found a staggering number of books I hadn’t even heard of, let alone read.

If you follow the world of superhero comics, the biggest controversy of this past year was Marvel Comics’ ongoing storyline that found Steve Rogers, the classic Captain America, turned evil. His arch-nemesis the Red Skull utilized a sci-fi MacGuffin called the cosmic cube to rewrite Steve’s history such that he not only was a member of the Nazi-like organization Hydra, but had always been a member of that organization.

Naturally, a lot of fans went rabidly mad at this narrative choice. Many saw this as an insult to the memories of Steve’s creators, Jack Kirby and Joe Simon, both stridently anti-Nazi Jewish artists who made the bold decision to feature Captain America sacking Hitler on the jaw in his very first comic book appearance, before America was even involved in World War II. Others thought this was too much of a departure from the portrayal of the character on film, and that it was a betrayal of fans of Chris Evans’ Captain America.

Personally, I disagreed with both of these stances. Steve’s transformation came amidst a larger storyline wherein he had turned over the mantle of Captain America to his former sidekick Sam Wilson. Because Sam is black, and because he used his position as Captain America to espouse a progressive political viewpoint, he faced immense backlash, both within the narrative of the Marvel universe and from fans and readers online. To bring Steve back as Captain America, but also as a member of Hydra, seemed to me a direct response to this backlash, an audacious statement that there was nothing inherently more “American” about blond-haired, blue-eyed Steve Rogers than Sam Wilson.

Unfortunately, in the large-scale crossover event miniseries this storyline led into, called Secret Empire, all of the interesting meta-commentary ended up extremely watered down. The prerogatives of a Disney-owned publishing subsidiary overrode all other concerns, and a tepid “epic” about the world under Hydra rule essentially forgot about the political and racial allegories of earlier in the storyline in order to appeal to the conservative fans who wanted their white-bread Captain America back in the saddle at the end of it all. 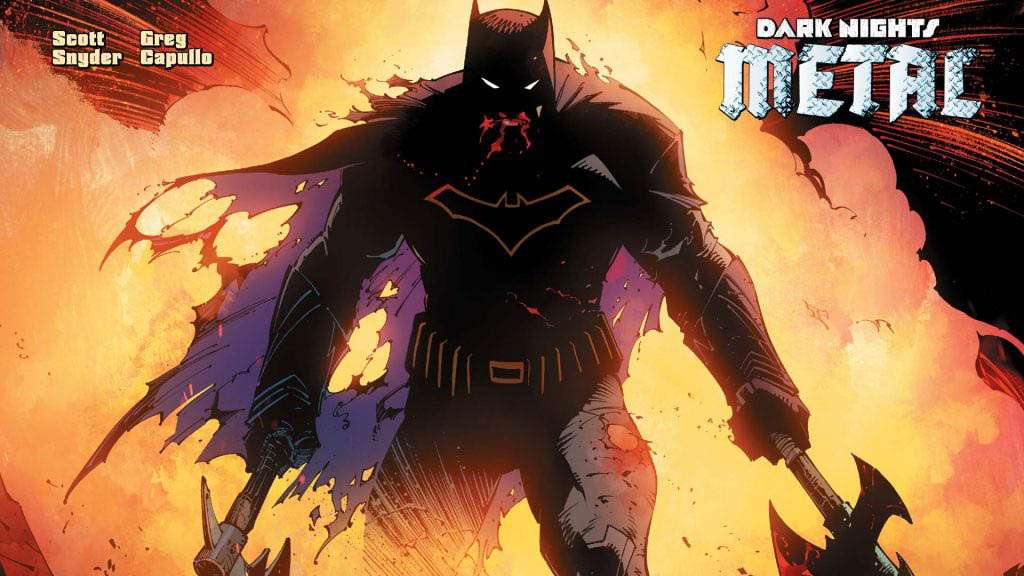 Whereas in 2017 Marvel took an interesting story of cultural relevance and turned it into a toothless crossover event, its rival publisher, DC Comics, based its own crossover event on a panoply of wildly gothic ideas that wisely did not attempt to plug in to current events.

In Dark Nights: Metal, writer Scott Snyder (aided by James Tynion IV) and artist Greg Capullo created the culmination of their long pairing on the monthly Batman comic. What started as a background conspiracy woven throughout several Batman adventures turned into a massive crisis wherein all of DC’s darkest alternate dimensions — the “nightmares” of the DC Universe — attacked the Justice League and other DC heroes.

Though it’s not yet concluded, and thus may fall flat in its ending, Metal wisely did what DC Comics does best: it went batshit insane (if you’ll pardon the pun). Whereas Marvel cut its teeth through cultural relevance, DC’s greatest strength has always been how “out there” its writers and artists have been willing to go in their creation of a cosmology consisting of endless alternate versions of the company’s heroes and villains. Metal is a celebration of that creativity and innovation that focuses on a pure distillation of good versus evil that doesn’t bother with many shades of grey.

Finally,whereas Marvel made an attempt to comment on the real-world craziness of 2017 — which fell flat due to an unwillingness to follow through on their story’s darker implications — DC simply decided to go crazy.

The feverish nightmares found in Dark Nights: Metal can certainly stand in for this nightmare of a year, but they can also just provide really good escapism. Your mileage may vary.

This may be a bit of a cheat, since Chilling Adventures of Sabrina began publication in 2014. However, two issues did come out this year, and they were two of the best comics I read all year, so I’m going to count it.

In this series, writer Roberto Aguirre-Sacasa takes the familiar story of Sabrina, the Teenage Witch, and simply makes one massive change — he treats it seriously. Suddenly, the occult family background of Sabrina is less Melissa Joan Heart and more Rosemary’s Baby.

However, Aguirre-Sacasa refuses to play this for a joke, something that served him well in the sister comic to this one, Afterlife with Archie (a series about a zombie attack in Riverdale that is also darkly serious). Alongside artist Robert Hack, Aguirre-Sacasa has made Chilling Adventures of Sabrina into a dark, moody 70s-flavored horror story that uses its mystical trappings to comment on the darker aspects of being a teenager in a way that the classic Sabrina comics never could.

Believe it or not, Archie Comics is in something of a renaissance right now, updating their characters for modern teenage readers and spawning the hit show Riverdale as a result. But in looking for a comic book company interested in both entertainment and cultural relevance, the modern Archie line hits both those notes better than any other mainstream publisher these days.