In her latest play, Elizabeth Doss plays with the history — or the lack of history – of a most unusual woman 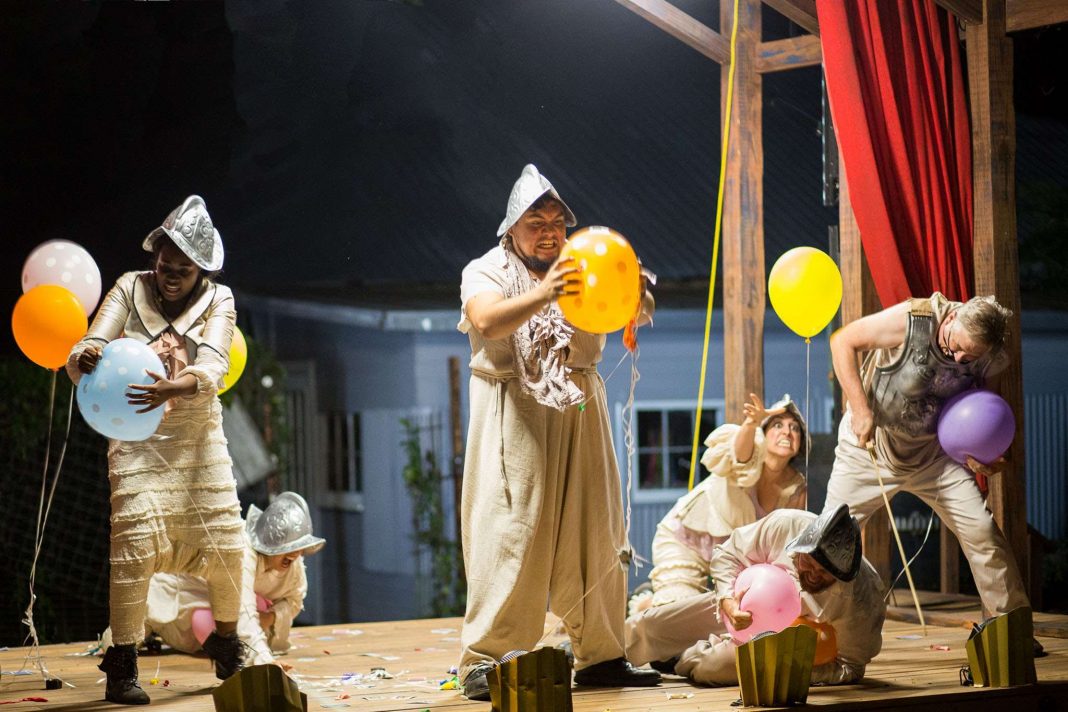 The eponymous 17th-century “lieutenant nun” on which Elizabeth Doss’s latest play is based managed to first escape a convent and later Hapsburg Spain by disguising herself as a man. From there, Catalina graduated to increasingly bloody exploits in colonial New Spain transforming herself into the first “conquistadora” while for decades passing as a man.

Director Dustin Wills guided Paper Chairs’s production from commedia to the grotesque to outright postmodernism over two-and-a-half hours. The premiere played for three weeks in September at a self-fashioned outdoor stage on the grounds the Center for Maximum Potential Building Systems.

The ensemble of seven — costume designer E. L. Hohn clad them in loosely approximated 17th-century undergarments — handily covered the many dozens of other characters throughout the adventure. While they were offstage these cast members lounged in partial view of the audience and provided all the jeers, cheers and tears a contemporary audience might be too timid to offer up.

It’s refreshing to watch a full-length epic driven by female concerns and although Doss does not press into the subject, the rich portrayal of a gender-fluid historical figure (tirelessly portrayed in this production by Alexis Scott) is significant given the legacy of erasure that community has undergone. Ultimately, though, Catalina’s slippage from the pages of history books serves as our entry point to this strange, unyielding and immensely pleasurable play.

A faux talkback disrupted the play’s denouement to foreground its postcolonial implications. Well executed, the stunt had audience members truly unsure whether the cast-in-revolt sequence had been rehearsed or not as the actors tried to elicit opinions on whether Catalina (the historical figure) deserves to be valorized, condemned or even forgotten.

“Catalina de Erauso” is the kickoff production to a yearlong collaboration between Paper Chairs and the Center for Maximum Potential Building Systems, which has an 18-acre site in far east Austin. Paper Chairs will be the center’s first ever “theatre in residence”. Although no other events have yet been publicized by the partnership, it is easy to see the appeal of the venue. Its charming, things-go-on-here vibe greets the audience upon entry through a canopy of plant life, and we felt free to explore the facility’s experimental crops, unique structures and architectural design studio.

Together, Paper Chairs and CMPBS stated goal is “exploring sustainable strategies for making ‘green art’ in Austin,” which will result in site-specific performances, workshops and discussions in the year to come. While few would argue that such nonprofit partnerships and the green movement are both commendable gestures toward community- and consciousness-building, I strain to see the connection to the particular content of Doss’s play. Like the many Austin theater companies currently priced out of more traditional venues amid rising real estate prices, however, Papers Chairs has forged an unlikely yet gratifying alliance.

Viscerally, Lisa Laratta’s set design will stay with me long after I forget the details of Catalina de Erauso’s life. Its timbered frame structures support and adapt along with the audience’s journey from sympathy to uncertainty, from melodrama to the post-dramatic. A cartoonish backdrop, for instance, complements our heroine’s Vaudevillian escapades during her earliest years in the Dominican convent. Much later, her remorseful father (Robert Pierson) heartbreakingly recounts recovering Catalina’s body, minimally illustrated by delicate shadow play on overhead projector transparencies.

In a language-centric play that articulates quite a bit, a single moment that decenters words altogether hangs on. The prologue to the second act signifies the narrative transition to the Western Hemisphere as the ensemble dons hardhats and reflective vests to tear down velveteen stage curtains. Chattering indistinctly, they crew dismantles the backdrop and strikes props until the audience can see clearly past the performance and into the woods behind Laratta’s set.

We have been presented with a picture-frame composed of a raw stage set perpendicularly with naked beams while the subject at its center is suddenly, expansively America itself