When you receive an elongated phone buzz or a car radio grinds intolerably, something different is sometimes occurring, something that breaks you out of your ordinary day. No one is selling you a product. No on is demanding your time in measurable ways.

It’s a Severe Weather Warning, and it wants your attention.

Austin playwright Elizabeth Doss’s new comedy by that title, at the Long Center’s Rollins Studio Theatre and produced by Theatre en Bloc, features four women locked in a lifelong friendship and all badly in need of a getaway. It’s new mother Annette’s (Kacey Samiee) birthday, but in her new role as a parent and a spouse, she is finding little to celebrate.  Samiee is blade-sharp in this role. She is the most reluctant to divulge her struggles, but earns every moment of her withholding.

Meanwhile, Agatha (Leslie McDonel), an oil-money-trust-fund-baby has recently declared herself to be a self-help guru and has written a book about it. Plus, the grit Adel (Charlotte Gulezian) acquired building a tech company from the ground also won’t let her put down her phone and talk. The storm clouds gathers in the distance.

Their friend Anne (Giselle Marie Muñoz) wants nothing more than to nurture the hell out of Annette, Agatha, and Adel. She carries her own quiet desperation, of course, feeling a special kind of isolation that staying home with multiple kids can engender. Muñoz delivers an earnest desire to see her friends connect and support each other through these most recent travails as they have in the past—that and the full case of Shiraz from HEB that they down in a single night. 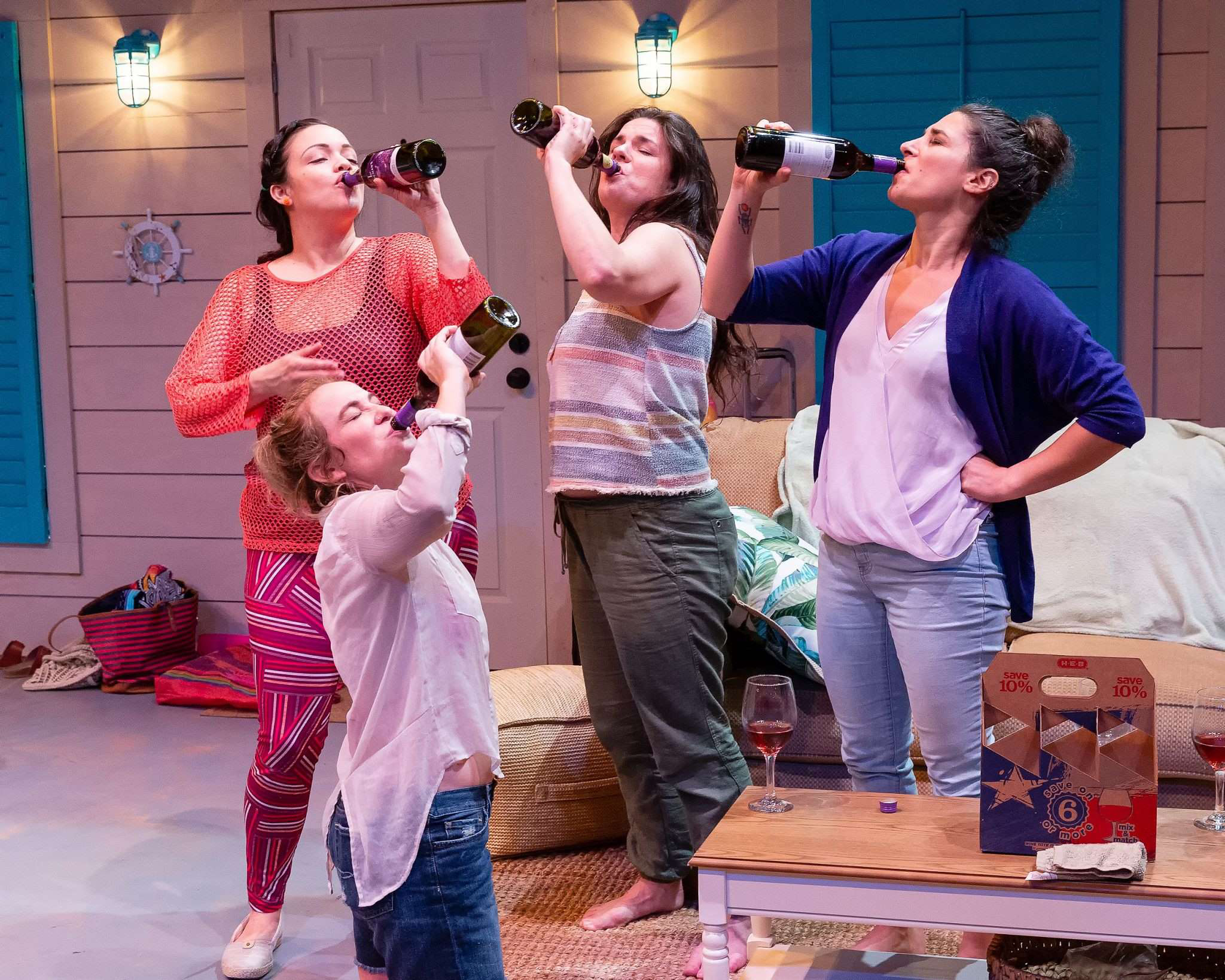 Director Jenny Lavery’s bounding and playful direction swells to fill the box set, pulling mayhem from the eerie calm. There is an amusing awkwardness to their initial arrival that delightfully captures the true horribleness of trying to figure out what to talk about in a closed setting. Worse yet, these women are supposed to be dear friends and celebrating, so their halting attempts to pick up where they last left off only uncover resentment.

In a recent interview with KUT, Doss said:

“There’s like an age we all hit… around your mid- to late-thirties, where you’ve made certain kinds of decisions and you have to take stock. And you’re sort of looking around at other women and trying to figure out if the choices you’ve made make sense for you. So I think that’s the pressure cooker that this play is sitting inside of.”

So much of the hilarious and heartfelt arbitration that ensues, the breakdown of that initial uneasiness, deals with the comparison culture the playwright mentions above. “Severe Weather Warning” takes up the complexity of convincing ourselves that even the people to whom we are closest cannot possibly understand our struggles. What Annette, Agatha, Adel, and Anne find is that it’s both true and not true, and like many important reminders, it’s bought with drugs and alcohol and honesty.

There are questions that would matter in a different kind of play:

Who planned this weekend? Exactly how long have these friends been drifting apart? Didn’t they look at the weather before leaving Austin? And why do all their names start with the letter A?

In this production, however, the fixtures of the “real world” that do not fit inside the unassuming beach house are let loose. What’s left is one night trapped on the Texas Gulf Coast with a storm making the roads impassable. Spending the duration of the 80 minute show with these women as they travel deeper into the night — into their vulnerability and their desires — is like watching their relationships accelerate into hyperdrive between blinks of darkness.

The notable exception to this somewhat enchanted isolation is a Y2K time capsule that surfaces from their high school days. The capsule creeps with metaphorical significance into the scene: it’s full of their past selves. It is an unchangeable record of who they were before they had all-consuming jobs, before children, before miscarriages, before malaise. In a way, though, they are each other’s capsule as well, and “Severe Weather Warning” is a play in which it costs something to remember that.

It’s common in stories about rediscovering connection (especially when those stories are about women), to fall back on the language of “sisterhood,” or “found family” that often and validly seem like an apt way to describe their closeness. This play does not, though. These women all have families and work lives, but this getaway weekend draws a circle around friendship.

It says this is critical. It needs your attention. A storm is coming.

In ‘Plano,’ Plagues of Slugs, Ghosts, and Men

“Dance Nation” Captures the Passion and Aimlessness of Pre-teen Life

Channeling the Voices of Ferguson in “Until the Flood”