Salvage Vanguard Theater’s “Antigonick” is a stunning and enigmatic production 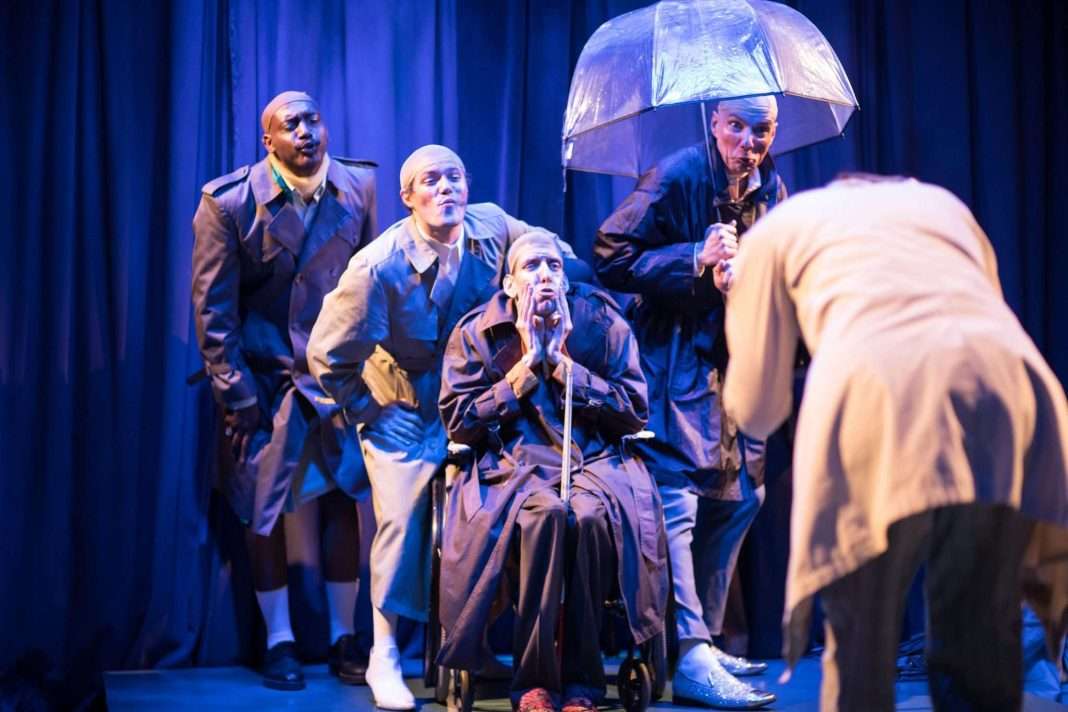 In her introductory letter to the title character, eminent poet Anne Carson, the translator of  “Antigone,” informs her that her name in the original Greek means “something like ‘instead of being born.’”

Carson goes on to ask, “What is there instead of being born?”

When Megan Tabaque addresses these questions to the audience gathered outside the Dougherty Arts Center at the beginning of Salvage Vanguard Theater’s new production of “Antigonick,” we may not be sure who Tabaque is.

We are standing outside the loading dock, and a passing train totters by as if choreographed. Tabaque speaks to the crowd like we are attendees at a funeral before we know anything else, though, intoning earthy sincerity and dispelling any preconceptions we might have about the loftiness of Greek tragedy. From the first moment Tabaque speaks, she is at once Carson and Antigone — translator and subject, author and performer, myth and woman.

Filing into the intimate theater, Lisa Laratta’s minimalist scenic design dominates the space with its expert simplicity. Above the runway-like profile stage hangs an intricately arranged mass of plastic bottles and cups that diffuse light and loom over the action like Damocles’ sword, an iceberg, or impending climate crisis. At any rate, it’s a threat on an epic scale that frighteningly is composed of the everyday.

Antagonist Kreon (portrayed with sinuousness by Jay Byrd) is almost a template for the tyrant whose arrogance ultimately topples him from his lucite throne. Byrd brings to the archetype a particularly distressing obsession with order — translated for our audience into a fixation on personal hygiene — that makes him immediately recognizable in 2019.

It should be noted that Carson’s text is more of a poetic translation of the ancient playwright Sophokles meant for reading more than it is a blueprint for performance. The rich language resonates but can sometimes grow too dense with meaning. As such, Small has found ways of inventively keeping us in the moment like audio looping or whispering certain lines like an audience-wide game of telephone.

This is a play doubly translated: once by Carson and then again by Salvage Vanguard, the bodies we see and know to be in peril. A decision was made, for instance, that Paige Tautz would play both Ismene and the entire Chorus of Old Theban Men. While Tautz’s performance is dynamic and exciting to watch, they are the moments of visible poetry that excel in this production. Tautz removes her wig, we know there is nothing she can do for her sister.  When Kreon touches the plastic mass overhead, the threat has arrived and Antigone’s peril is assured. These are them moments when both translations are most in sync.

Travis Tate, Tobias Al-Trabulsi, and Vincent Tomasino fill out the cast of various messengers, princes, seers, and guards with performances that lead with the physical rather than the psychological. Embracing their characters as necessary plot devices, we are reminded that this is the world of the mythic. They stand in contrast to Tabaque’s Antigone, who looks and sounds like a person we can hardly imagine would be put to death by the state. Late in the play, however, a new character, Eurydike (Tomasino) harrowingly disrupts this pattern. The bloody handkerchief she produces surprises us with the human.

This stunning and enigmatic production is just a little bit of that something else.

At the Blanton, ‘Painted Cloth’ presents more than the sumptuous clothes of Colonial Latin America