Review: Two from Radius Books on Ellsworth Kelly and on Sol LeWitt

"Ellsworth Kelly: Austin" and "Sol LeWitt: Not to Be Sold for More Than $100" 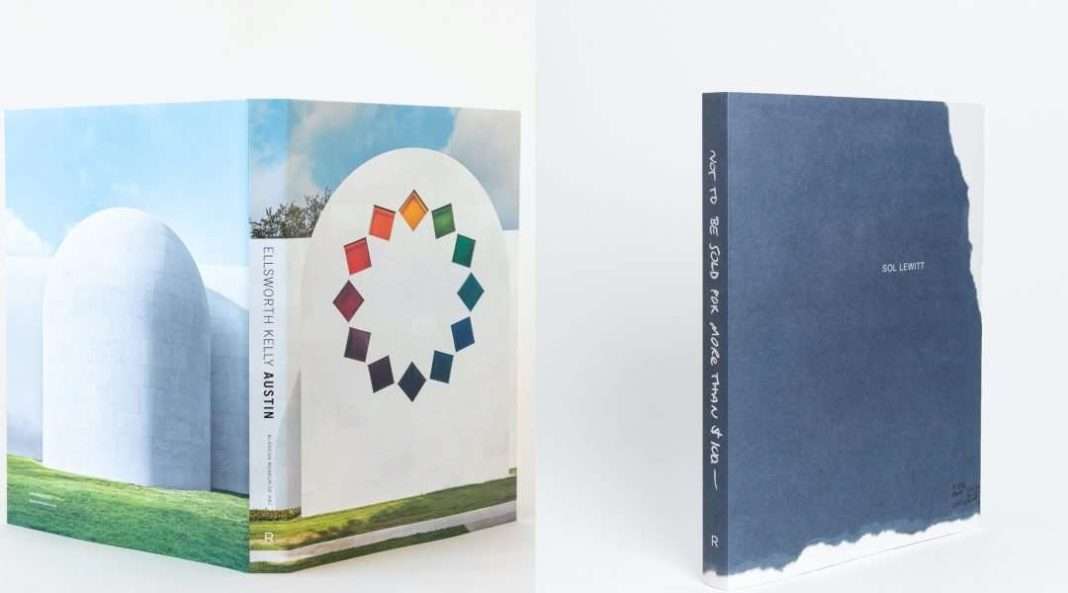 The Blanton Museum of Art recently re-opened its doors. Guests must adhere to normal COVID-19 precautions such as wearing face masks, and social distancing, and now are required to reserve advance, date-specific, timed-entry tickets, which happily include admission to Ellsworth Kelly’s “Austin.”

“Austin” of course is the 2,715-foot building/artwork/chapel that sits on the Blanton’s grounds. And while the colorful glass windows can be appreciated from the building’s exterior, seeing the inside with its totemic wood sculpture, and 14 black-and-white marble panels completes the picture.

The museum’s website says Kelly’s work was “envisioned as a site for joy and contemplation,” things we always need, but perhaps today more than ever. In lieu of a planned visit, or to complement one, solace seekers may enjoy the space through the hard cover volume “Ellsworth Kelly: Austin,” co- published by the Blanton Museum of Art and Radius Books (2019, $65), a non-profit publishing company located in Santa Fe, New Mexico, known for its innovative art books. (Radius has also co-published with the Contemporary Austin.)

The Kelly book begins with Blanton director Simone Wicha providing some inside information about how “Austin” came to Austin. Kelly’s concept originated in 1987, when the artist planned a chapel for a client in California that never materialized. It wasn’t until 2012 that conversations between the museum and Kelly made headway, and as Wicha writes “On December 18 2015, I called his studio to confirm final details for the concept document, which captured all of his design decisions — in essence our roadmap for what to build. I also let him know that construction for “Austin” was starting. Nine days later, he passed away.”

Despite not seeing its completion, the book proves the realization of Kelly’s vision. The scope of the project is revealed through both a lucid an insightful essay by Deputy Director for Curatorial Affairs and Curator of Prints and Drawings, Carter E. Foster, and accompanying images of plans, preliminary drawings, and building models, as well as construction photos. Of course, there are plenty of full-page photos of the completed work, but also a few behind the scenes images of the artist in his studio.

For an art historian, perhaps the most valuable portion of the book is the last half, in which there are four sections, each dedicated to a major artist’s motif: “Black and White,” “Totem,” “Spectrum,” and “Color Grid.” Each section introduces Kelly’s past use of the motif and then addresses how they were incorporated into “Austin.” Well selected color plates illustrate how the parts over time would become the whole.

The book is large (10” by 14”) and has a lay-flat binding, opening all the way in the middle. This type of format is supposed to eliminate breaking the spine and allows the book’s inside margins to be reduced. Here it also divides the introductory essays and photos from the “motif” section and while it doesn’t enhance image viewing, it just looks cool. Overall “Ellsworth Kelly: Austin” offers a comprehensive examination of “Austin” from its first stages to its current position along a fuller understanding of the artist’s wider practice.

When LeWitt (1928-2007) started making the cut, folded and torn works, he intended them to be priced at $100. “His wall drawings were already selling for thousands of dollars, so he wanted to have some artwork that everybody could buy,” notes, Jason Rulnick, one of the book’s contributors, which also include Virginia Dwan, Blanton curator Veronica Roberts and Chelsea Weathers.

A pioneer of conceptual art’s central tenet — that the motivating idea is paramount — LeWitt’s work doesn’t elevate the object, technique or aesthetic as tradition prescribed. Roberts states in her essay “Sol LeWitt’s Radical Rips,” “What better way to upend notions of drawing than to rip a piece of paper?”

While this particular body of work consists of over 800 folded, torn and cut paper works, as well as cut maps, and manipulated photographs, the vividly illustrated book includes over 100 color plates, along with an index of all 870-known works.  Works like “From the Upper Left and Lower Right Corners Toward the Center of the Page” (March 29, 1975), a simple square of torn orange paper, signed titled and dated in graphite, jumps off the clean white page.

For those familiar with LeWitt’s wall drawings, these works will undoubtedly jar familiar ideas. Whether ripped, folded or cut, this series retains LeWitt’s trademark exacting approach to artmaking, even in a simple gesture. In fact, by 1973, this series too featured precise and explicit written instructions of where actions should occur.

While lesser known, this body of LeWitt’s work challenges ideas about privileging the artist’s hand, art as commodity and the absoluteness of the object. And while the $100 price couldn’t last for long — pushing back against a closed and commercial gallery system?  Seeking a more egalitarian art community? Those things still resonate.

Erin Keever
Erin Keever is an Adjunct Professor of Art History, freelance writer, art historian and art appraiser. She lives and works in Austin, and serves on the Sightlines board.

Between being and nothingness: Oscar Muñoz at the Blanton Museum of Art