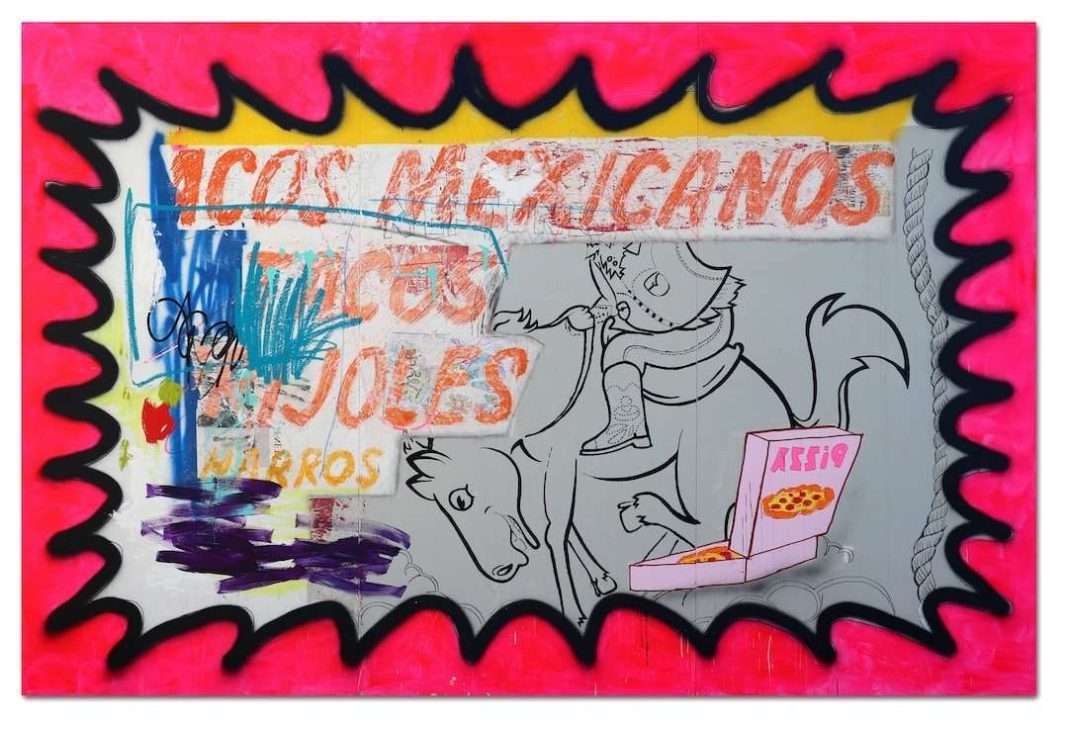 In 1945, while stationed in Okazaki, Japan, the Brownsville-born soldier and reporter — and later renowned scholar and ethnographer — Américo Paredes sat down to write a poem.

He didn’t write about the ancient castle, shrines, or temples in Japan, or about the war crime trials he’d covered for an American army magazine. Instead, he wrote a few lines dedicated to “Tequila, mestizas, y mariachis,” and “el sol de Brownsville.”

Paredes would later describe his poems from this era as “the scribblings of a proto-Chicano,” and “more burrs and thistles than flowers.” In any case, the poems — which are written in English, Spanish, and sometimes a mix of both languages — are proof that Paredes carried his roots with him wherever he went.

The same could be said of curator and artist Jesus Treviño, whose new exhibition “Between Two Worlds” at the University of Texas’s Visual Arts Center takes its name from Paredes’s book of poetry from the 1930s and 1940s.

“Physically, the border is where the United States ends and Mexico begins, but culturally, those lines are blurred, and that’s reflected in the language of the border,” Treviño told me in a recent email.

His impetus for organizing the show? “I started to notice how those bilingual aesthetics like code switching carried over into the visual culture, which then trickled down into some of the work me and my friends were making.”

One surprise comes in the form of artworks made from guajillo chiles. Garcia’s “Varada / Stranded” (2018) is a slick, rounded mass completely covered by the pepper. Laid atop a bed of chile pods and seeds, the mound-like sculpture has a disconcertingly gory, intestinal, even excretory feel. In another work, “Ellas / Ellos / Them” (2017-2020), Garcia scrapes and smashes chile seeds, skin, and flesh into sheets of paper. Guajillos are the second most commonly used pepper in Mexican cooking, but here they take on the look of sacred signifiers like ancient cloth, dried blood, or rich earth. I was obliged to keep my mask on, so I could only imagine the scent of Garcia’s work.

Nearby, Burciaga offers another study in red, or more precisely, scarlet. In his installation “Fronteño” (2020), a pair of cowboy boots, flannel shirt, and rosary on a pillow are all covered in scarlet, rose-patterned lace. Lace feminizes the manly Borderland clothes, but scarlet and roses also carry deep meaning in the Mexican Catholic Church: the Lady of Guadalupe is known for her roses, and scarlet has long been the color of martyrdom. Burciaga’s mix of sacred and profane lends itself to the ceremonial, and I wondered what sort of performance could be enacted with these altered objects.

Beyond Burciaga’s flannel and boots, clothing – or the lack thereof – holds a presence across the show. In his self-portraits, Treviño’s Spiderman and Kiss t-shirts are a firm reminder of the painter’s part in mass-produced modernity. That unavoidable detail plays against Treviño’s glowing technique, which softly but impressively conjures Baroque masters like Caravaggio and Murillo. Del Castillo paints herself nude. With her and on her hip, she gazes defiantly, though undoubtedly alluringly, at the viewer. And Rodriguez’s small ceramic paletero wears a blue robe edged with gold reminiscent of a Spanish Colonial santo, while his stiff stance, oversized hands and feet, and kohl-rimmed eyes look playfully pharaonic.

And then there’s the pink, sparkly quinceañera dress sported by the girl in Gonzales’s “Tiempo del vals at Sunrise Mall” (2019). Among its other surprises, this glossy piece features real glitter! Gonzales’s objects move tantalizingly between two- and three dimensions, and represent one of the exhibition’s most innovative processes: oil-tinted resin collaged on wood. In this work, the quince girl and her sharp-dressed chambelanes stride proudly past American Eagle Outfitters, the pricey paragon of white kid prep.

They may be between two worlds, but these teens know what Paredes knew: wherever we go, we take our roots with us.

“Between Two Worlds” continues at the UT Visual Arts Center through Nov. 20. utvac.org/event/between-two-worlds

At UT’s Visual Arts Center, two shows are both timely in their own right