This is the last line of the evil, demonic Pennywise the Clown in the 2017 version of “It,” based on the horror novel by Stephen King.

As far as villainous bon mots go, it’s a bit of a clunker. One can’t help but wish that every cinematic bad guy would turn to the camera and whisper the theme of the film right before dying, like Darth Vader wheezing “Power corrupts!” or the T-Rex in “Jurassic Park” roaring, “The hubris of man!”

As a one-word summation of life in America these past few years, though, it’s hard to get any more succinct. How can you not live in fear when women will be denied access to reproductive health in half the nation within a few years, when war profiteers are given more rights than school kids, when your own country has established veritable concentration camps for children?

It’s very, very easy to become overwhelmed by fear these days. I’ve been washed away by it, myself, recently, and taken refuge and solace in pop culture in order to escape from the wolves at the gate.

I should, of course, know better. Even the most innocuous of popular culture cannot help but be political, since human beings, the creators of all that pop, are inherently political creatures. On the day that Anthony Kennedy retired, I opted to turn off the news and tune out my mind with an old episode of “Frasier” . . . in which there’s a subplot about gun control.

So perhaps we shouldn’t try to escape into pop culture. Maybe, instead, we should use its stories as a narrative shield to give us strength against hopelessness, to clothe us in armor that will protect us from the forces arrayed against us.

But do we have good enough stories to give us the kind of strength we need right now? Let’s take a look at some of the movies that have been released this summer, and see which ones we can take something from in order to help us live our lives a little less fearfully.

(Note: These films are confined to the ones I’ve actually had a chance to go see. Sorry, “Solo: A Star Wars Story” and “Incredibles 2.” Also, consider this a big, fat, huge SPOILER WARNING for all of the movies under discussion.)

The story: A chatty, batty, fourth wall-breaking mercenary must protect a young mutant boy from a time-traveling soldier of the future who wants to kill the boy before he becomes a super-villain.

The lesson: As extremely adult in tone and language as this film is, much like the first “Deadpool” it’s ultimately fairly traditional in its moral, which espouses the value of family.

Family is something you can create, not just something you’re born into, and sometimes those families are the ones you need most to help you overcome trauma. Deadpool, Cable, and the rest of the oddball cast come together by the end of the film and realize that they can’t change the past, but instead need to lean on each other in order to create a stronger future.

And then a comedic mid-credits tag tells us that, no, we can change the past, and we should never give up . . . especially in pursuit of making people laugh.

The story: When the island resort from the first “Jurassic World” undergoes a volcanic eruption, an evil businessman “saves” the dinosaurs in order to utilize them, and their DNA, as modern weapons of warfare. A team of humanitarians fights against this plot, only to end up freeing the dinosaurs into modern society, potentially setting off an ecological holocaust even worse than what the bad guys had planned. Oops.

The lesson: The moral of “Fallen Kingdom” is yet another rehash of the entire “Jurassic Park” series’ ongoing argument that man shouldn’t play God. Jeff Goldblum even pops up for about thirty seconds to remind us about that. Using many of the same words he used in the first “Jurassic Park”!

In terms of pulling something useful from this, though, certain moments of “Fallen Kingdom” do serve as a reminder of the impact that human beings have on our environment, and that to ignore this power means to turn a blind eye to the suffering of other creatures as well as our fellow man.

“Ant-Man and the Wasp”

The story: Unlikely super-hero Scott Lang returns as Ant Man, this time accompanied by a partner, Hope Van Dyne, a.k.a. The Wasp. Together, the pair must fight against an array of third-rate and mid-tier bad guys to rescue Hope’s mother, Janet, who’s been lost in the subatomic quantum realm for decades.

The lesson: This movie is an intentionally light-hearted one, with very personal stakes for the characters, as something of a palate-cleanser after the epic “Avengers: Infinity War.” There’s not a whole lot to be taken from the hero-vs.-villain dynamic, other than that Paul Rudd’s charm may be the Marvel Cinematic Universe’s greatest superpower.

Everything he does, whether normal or superheroic, is motivated by his desire to bring up his daughter as a good person and to make the world safe for her. By his own admission, she’s a better person than he is, and someday (if she follows the path of the comics) she’ll be a better superhero than he is. His story is a timely reminder that sometimes, even if we don’t have it together enough to change the world today, we can still help create a better tomorrow by investing in our children. 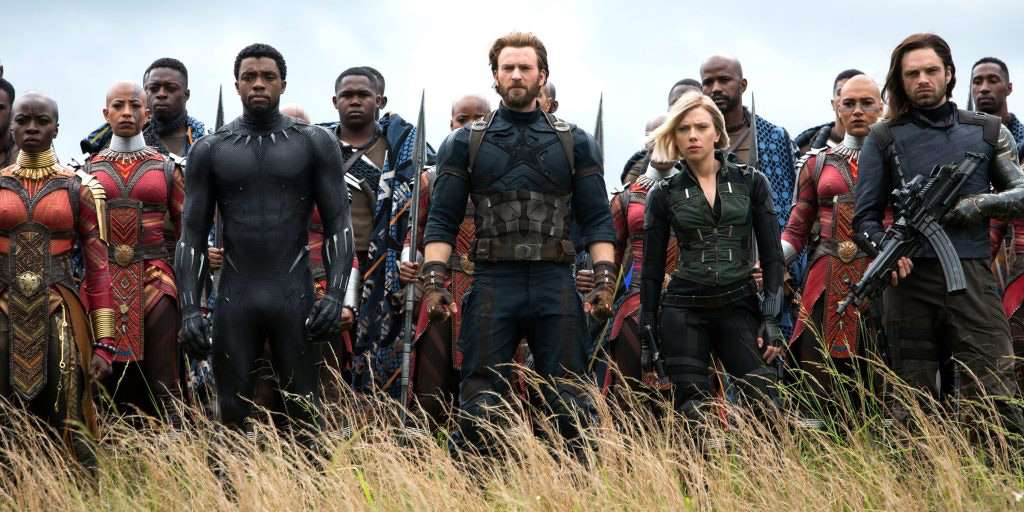 The story: Intergalactic baddie Thanos must gather six shiny MacGuffins in order to gain the power to kill half the universe and allow the other half to thrive on the remaining resources (don’t question it too much; for a god-like bad guy, it’s a really dumb plan). The assembled heroes of the MCU fight against him . . . and lose. Then half of them fade to dust.

The lesson: “Infinity War” is more of an event than it is a film, a big, bold theme park ride given life as a two-and-a-half hour movie. If you haven’t seen the previous films in the franchise you’ll be hopelessly lost, and if you’re looking for some kind of narrative closure you’ll be woefully disappointed. In the most downer ending you’ll ever see in a superhero film, the Avengers fail, and with a snap of his fingers Thanos murders half of the universe (perhaps making this the movie with the biggest theoretical body count of all time).

The final words of the film, before the credits role, come from Steve Rogers, Captain America, the embodiment of American hope and optimism, mournfully panting out, “Oh, God.” Then cut to black. It’s over. The heroes have lost. The end.

And yet we know Avengers 4 is coming out next year. And we know that Spider-Man and Black Panther and the Guardians of the Galaxy, all of whom turn to dust at the end of the film, are slated to appear in sequels coming out over the next few years. And we know that this is a universe of magic, time travel, and resurrections, where most, if not all, of the deaths will be undone.

We know that Captain America is going to find hope again and lead his team to victory, somehow, some way. Because that’s how superhero movies operate. No matter what the losses the heroes face, they find a way to triumph in the end. Evil is defeated, and good wins out. Cut to black. The end.

Real life isn’t so simple, of course. Many, many times evil wins. We’re in a period right now where fascist evil is winning. It’s winning so much that we’re sick and tired of it winning.

So perhaps those of us opposed to that evil need to remember that no win is ever the final win. Just because we’ve seen the credits doesn’t mean it’s over; we can still rally and try to undo what damage we can.

As Captain America himself once famously said (or, rather, as writer J. Michael Straczynski wrote him to say), “Doesn’t matter what the press says. Doesn’t matter what the politicians or the mobs say. Doesn’t matter if the whole country decides that something wrong is something right. This nation was founded on one principle above all else: The requirement that we stand up for what we believe, no matter the odds or the consequences. When the mob and the press and the whole world tell you to move, your job is to plant yourself like a tree beside the river of truth, and tell the whole world, ‘No, you move.'”

“Won’t You Be My Neighbor?”

The story: You may have always suspected that Mr. Rogers was too good to be true, and that there was something more cynical behind his good guy persona. Well, this take-no-prisoners documentary by Morgan Neville is here to tell you that . . . you were wrong. Fred Rogers really was that amazing, according to everyone who knew him.

The lesson: It’s hard to top Steve Rogers when it comes to inspiring heroic protagonists . . . until you look towards another, entirely more realistic, Mr. Rogers.

Fred Rogers’ PBS programming for children imbued a generation of youngsters with a positive sense of self-esteem, self-worth, and self-value, and that’s a lesson we can all use today, particularly in light of the recent images of children locked up in cages within our own country. Fred Rogers didn’t see the color of a child’s skin; he saw the inner light that he wanted to encourage. To him, every child had worth (not just the white ones, as Fox News would have it).

That’s something that we need to remember as adults, too. We have value. We are worth something. And we are loved, even if it’s only by a funny little man wearing a sweater who speaks to us through repeats.

Perhaps that’s the most important lesson we can take with us right now as a bulwark against the darkness. In an era where our own government and its propaganda machines is trying its best to turn our fellow human beings, including children, into subhuman animals, we can never, ever, ever forget that every person has inherent value.

Fred Rogers’ message was a simple one — we must love ourselves and we must love one another. And perhaps if we keep enough of that love in our heart, it will be enough to overcome the fear.

So I can only hope that in the end, even if all of my most paranoid, nightmarish fantasies come true, with my final breath I’ll be able to lock eyes with another human being and whisper, “Love.”

Come on in: At Fort Worth’s Kinfolk House, art and community...