Natural/Synthetic/Human: Tammie Rubin’s “Everything You Ever”

REVIEW | With fistfuls of an epiphytic Texas moss, the artist attempts to consume society’s fears about coming together 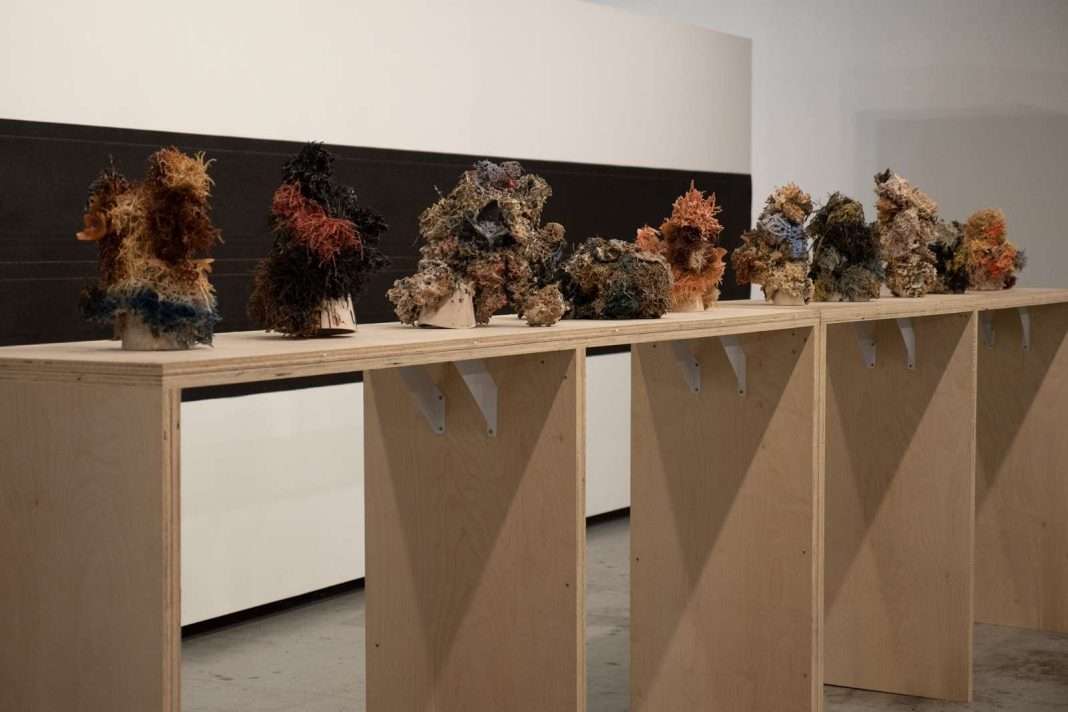 A familiarity and fondness for sculptor Tammie Rubin’s portfolio, and a sharp eye, allows you to recognize that the inner skeletons of her moss strewn, organic-feeling sculptures in “Everything You Ever,” at Women & Their Work Gallery through Jan. 10, are actually recycled from her previous series “Always & Forever (forever ever ever).”

This summer Rubin contributed to a burgeoning Austin legend: that during some opening nights at the Canopy arts complex, artists can be seen at work inside a cage. Indeed, in a trailer-sized open-air cage during the scorching Texas summer months, Rubin cast porcelain and slip as part of the Museum of Human Achievement’s Cage Match Project.

Despite a setup reminiscent of a stage — never mind the setting’s novelty — the artist was decidedly not performing for the audience that quietly gathered as she worked. Instead she took the signature form of her “Always & Forever” series — conical shapes with haunting eyes — and masked them with clumps of native Texas ball moss to make “Everything You Ever.”

As a ceramicist, Rubin could not avoid dipping the chaotic swirl of a plant into porcelain slip. The result is a natural/synthetic hybrid, where one cannot tell by looking if the plant is real or artificial. The kiln-firing process subjects the organic material to unsustainable temperature and surely it is obliterated completely, leaving a network of unfilled brittle capillaries.

In the gallery space at Women & Their Work, some of the 24 sculptures sit on spacious shelves where they can be admired in the round. Reduced pieces hang, like fairy lights, on string tied to the ceiling in a central installation piece entitled “Invisible Visible Indivisible.” Visitors have to delicately tiptoe around them to see them in full. They are akin to debris swept up and swirling in a frightening wind, and their fragile elegance begins to craft a metaphorical bridge with the ball moss as a symbol for chaos and uncertainty, clouding that which lies beneath it.

Rubin likens the heft of the ball moss, which can seem to crumble under its own weight in some pieces, to societal anxiety and conflict. Just as the meeting of moss with a tree, human interactions can lead to mutual growth, or mutual destruction. Perhaps human nature makes conflict more likely, but there exist as many possibilities as there are branches in the moss ball. There is always the potential that we can choke the life out of each other.

Rubin proves herself a master of materiality with the range of variation she is able to achieve though using the same techniques to construct each sculpture. Colors, from bold blue hues to fiery oranges to flat voids of black, evoke visceral feelings, when paired with the enigmatic appliqued moss. The underglaze sinfully drips from each branch to form a crackling crusty material armor. Materials added for structural support such as steel wool and wire concoct a heaping flurry that must be deciphered individually.

Individual consideration is due to each sculpture and the formal interpretation is up for grabs. Sometimes the color scheme is a free hint for something that’s supposed to look like coral or a monster or creature of some kind.

But the titles are the best giveaway for the mood each inhabits – “Anxiety Dive,” “Comfort Bind,” “The Answer Is Horrible/Rhetorical.” An extended series all have action names – “Driving,” “Riding,” “Worshipping,” “Consuming.” Each piece is a microcosm of projected anxieties about the exchanges which may cause panic and chaos. Alternatively, their mangled forms can act as relics that reach their arms around and trap those fears as we concentrate upon them.

To avoid making too much of the myth of the artist-in-the-cage, it is sufficient to say that working in such a state of vulnerability promotes self-reflection, and, in Rubin’s case, aggrandizement of her personal fears. In an act of reversal, she shifts them to society on the whole, underlining our hesitance to present ourselves to the world for fear of being swallowed up. The ever-present and oft-misunderstood ball moss is the perfect stand-in. Dipped in color and set aflame until it’s no longer recognizable, it is then ready to be put on display in all its brilliance.

As sharp as the metaphors are, “Everything You Ever” is an incomplete sentence. Put on a positive spin and it’s everything you ever wanted, be that beautiful art or deeper meaning or a societal connection. Or, it could be everything you ever feared, hated, lost; all tied up and smashed together in these miniature reflections of your inner thoughts.

Either way, it’s all there, if you’d only look deeper.