Making an effort to see: W. Tucker at Big Medium

In a body of work both elemental and singular, a conscious effort to pay attention

When W. Tucker had a solo exhibition at Texas State Galleries in 2012, he spent almost a week living in the gallery, sleeping every night on a modest pad, showering at the university’s athletic facility.

The gallery’s director had invited Tucker to consider the entire gallery his palette. And so to know the space better, to let his imagination run free and deep, he set up camp. Literally.

Tucker draws and paints on anything and everything: scraps of lumber, vintage dice and dominoes, all manner of paper ephemera including book jackets and record album covers, postcards, elementary school flashcards, playing cards. At Texas State, he used the walls for enormous painted works — and he drew on an exit sign and in the tiny space between a pair of light switches.

For his current exhibition at Big Medium, entitled “a cloud floats in / a ship passes by,” Tucker again commandeers any available surface and space. He’s painted one corner of the gallery a soft green, and placed two clouds outlined in white floating just above the floor line. There’s a drawing of a man in the hat hovering near an exit sign above the gallery’s plate glass front windows, and there’s an outline of an elephant above the gallery’s rear exit door. A tiny double portrait — each silhouette framed by a worn cardboard slide sleeve — sits at floorboard level where a wall turns a corner.

Tucker uses his own catalog of archetypes, a small cast of characters and things. There’s the stick man-with-a-hat, usually seated; an animal that may or may not be a rabbit which occasionally wears boxing gloves; clouds; a boxy-looking car; an elephant; a chicken (sometimes without its body); lots of boats. The scale of these figures is determined by whatever Tucker choses to mark on, be it an entire gallery wall or a tiny scrap of a vintage library card.

Mural-sized or miniature, his loose lines bear a beguiling childlike quality. Tucker is right-handed but choses to use his left hand to upend any skill or proficiency — to make marks in an unpracticed manner, with less intention and forethought. To combat the ambidexterity he’s developed over the years, he’ll often hold a drawing implement or brush in an awkward grasp, jammed between middle fingers. He uses resin stick, chalk, charcoal, ink, colored pencil, china marker, watercolor, oil and acrylic.

Tucker never starts his art making with a fixed idea nor an intention. His process is “a conscious effort to pay attention to how I go through life,” he writes in the exhibition statement.

“This show represents this effort to see.”

While there’s some immediate whimsy to Tucker’s iconography and style, his characters often seem  forlorn, their situations slightly unsorted.  His improvised compositions convey a sense of vulnerability, even fragility. And in ways both literal and symbolic, Tucker leaves a generous amount of open space in his compositions — hollows for a viewer’s contemplation, places to insert personal stories.

In recent years he’s produced small sculptures, assemblages of wood, cardboard and sometimes fabric, each piece often bearing a drawing. Mostly they are sculptures of boats. Toy-like objects, their intentionally rudimentary design leaves them vulnerable to toppling over.

I have a tiny piece by Tucker, barely an inch square, some kind of red resin toy block or perhaps a piece from a long-forgotten board game. An image of the rabbit-like figure is etched in white. It looks over it shoulder, its face forlorn. On the back, in the tiniest imaginable handwriting, Tucker inked its title, now so faded I can no longer read it.

Though I didn’t plan to meet up with Tucker when I went to see his show recently, he happened to be there when I arrived. And though we spoke some about his work, we mostly caught up: I hadn’t seen him since before the pandemic and as we walked around the show we shared stories of the two socially distant years. 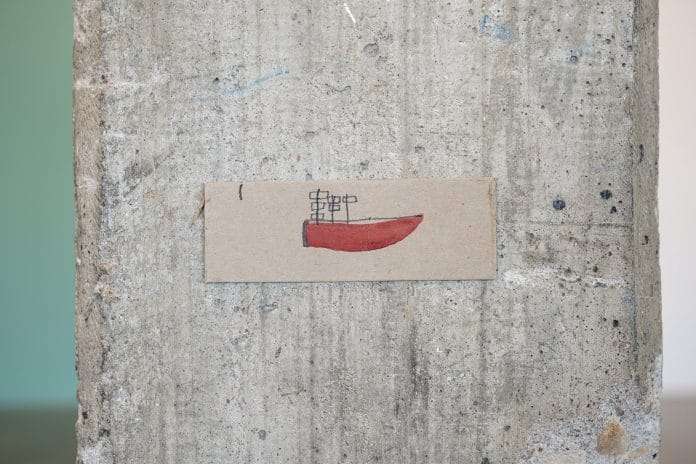 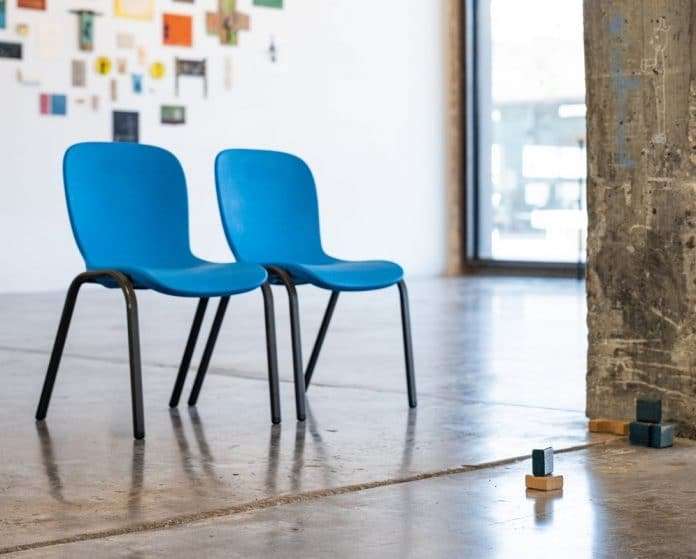 To really see everything in any exhibition by Tucker takes some effort. Sometimes you lie on the floor peering at a miniscule drawing or sculpture, or you wander to a back corridor where you’ve just noticed an image up above a door. But at the core of Tucker’s art is the invitation to slow down, be attentive in the act of looking.

Tucker told me he was particularly enamored by the concrete support in the middle of the Big Medium gallery, its roughed-up surface rich with haptic and visual interest. He hung a small drawing on one side of the square pillar. Around the other side, on the floor, he set up a tiny installation of wood blocks and on the floor, a resin stick drawing of a car, a yellow sun and a scribbled blue cloud.

Nearby are two bright blue child-sized chairs and there you sit, Gulliver-like, viewing the Lilliputian installation.

There you sit, making an effort to see.

“W. Tucker: a cloud floats in / a ship passes by” continues 12 noon to 6 p.m. Thursdays-Saturdays through April 9 at Big Medium, 916 Springdale Road. Admission is free. bigmedium.org