Lost in the Shadow: Tatiana Istomina’s ‘Philosophy of the Encounter’

REVIEW | If the exhibition intends to bring Hélène Rytmann out from Louis Althusser’s shadow to which history has relegated her, it misses the mark

In 1980, the influential philosopher Louis Althusser strangled his wife, Hélène Rytmann, with his hands.

In her solo show “Philosophy of the Encounter,” on view through November 12, 2019 at Texas State Galleries in San Marcos, artist Tatiana Istomina explores this murder and its still-rippling cultural and intellectual aftershocks through painting, sculpture, collage, and film.

“Philosophy of the Encounter” is accompanied by a gorgeous artist’s book, “Fhilosofhy of the Encounter,” comprising cutups of used translated copies of Althusser’s autobiography “L’avenir dure longtemps (The future lasts forever),” written after he killed his wife. (Althusser was hospitalized after the murder, declared unfit to stand trial for reasons of insanity).

Here, more so than anywhere else in the show, Hélène speaks for herself: Louis’ words have been scalpeled away and rearranged to leave only Hélène’s perspective. Every page of this book, including the collage on the cover itself (“Hélène, my Hélène, me I my Hélène me (I Hélène / my I Hélène’s Hélène I was I my me Hélène […]”), is a forceful explosion of voice, and we often get to glimpse Hélène as an autonomous being. “I had my failings,” she says, “But all the people I worked with, appreciated me as a person and the greatest friends I made myself through my work without any help from Louis.”

The collages tear through different forms with the same source text, a seeming nod to the cutup techniques of Brion Gysin and William S. Burroughs. Some are stripped back, with black backgrounds inverting their white space, the text swirled across the page or overlapping at angles that make the words almost illegible, reminiscent of the legacy of cento poetry or poésie concrète; others take large blocks of prose and swap out the pronouns (“her” to “I,” “me” to “him”). These substitutions have their own dynamic arc through the pages, which ask to be looked at as much as to be read. Here Istomina most fully inhabits the show’s vision of illuminating Rytmann as an agent with feelings, wants, and thoughts all her own.

Visitors can view seven pages from the 60-page artist’s book in this show. The book itself is not displayed or available on-site beyond a single gallery copy at the front desk, though it can be ordered online.

Istomina’s 20 paintings are abstract and muted, small (9”x12”) oil-on-paper works, sometimes incorporating crayon or graphite. Their muted earth-tone palettes—ochre, burnt umber, sepias, cyans and greys — are full of detail and texture, like glass slides pressed under microscopes or distant satellite shots of barren patches of earth, belied by the smooth, glossy, almost print-like surface of each painting. Istomina also incorporates drawn annotations — arrows pointing to particular regions with notes on them, schematic drawings like something out of a geophysics textbook, snippets of text. 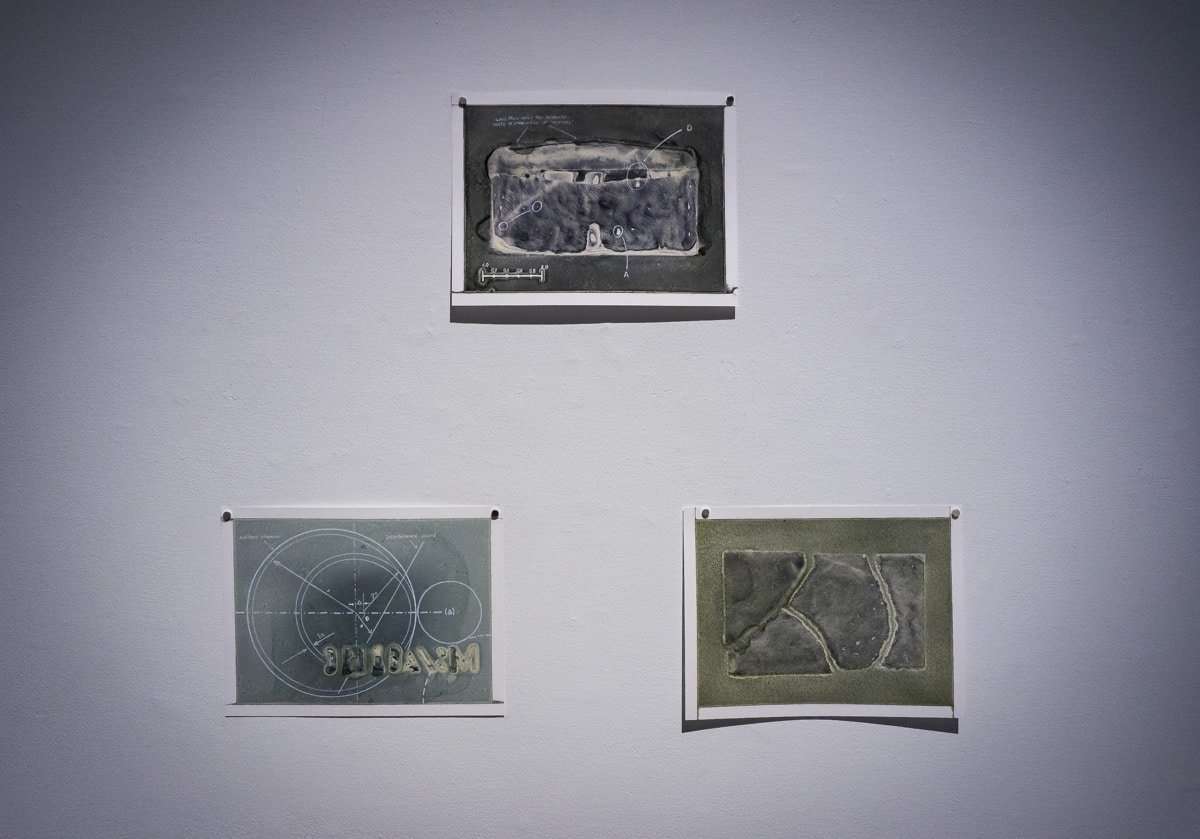 Though the paintings themselves are compelling as a group, I found them to be the most difficult to place in conversation with the other works in the show, which more explicitly focus on the fraught relationship between Althusser and Rytmann. Many of their titles — “Class struggle in theory”; “Contingent factors” — feel either didactic or interchangeable, shutting down (rather than opening up) the paintings’ visual resonances. The more successful paintings in this series strike a balance between disclosure and mystery, between the diagrammatic and the sensual, often with a playful edge. I loved the anagrams in “Here are my reasons” (1) and (2), and the vibrant “The muscles of life,” which prominently features a quote from Kazimir Malevich’s Suprematist manifesto (“But meat and the machine are the muscles of life”).

The centerpiece of “Philosophy of the Encounter” is a fascinating and challenging eponymous looping video featuring puppets — presumably of Althusser and Rytmann themselves — manipulated by a masked female puppeteer (Anna Gregor) clad in an all-white bodysuit. “Philosophy’s” soundtrack, a combination of improvised riffs from musician collaborators and motifs from Bach’s “The Well-Tempered Clavier,” flows through the one-room gallery. The colorful puppets from this film, crafted by artist Mona Sharma, are also displayed throughout the gallery space as standalone sculptures, sessile and drenched (mummified, almost) in white paint. Encountering them in this space and then seeing them come to life in the video gives the viewer a thrilling sense of intimacy and familiarity: we know these figures. 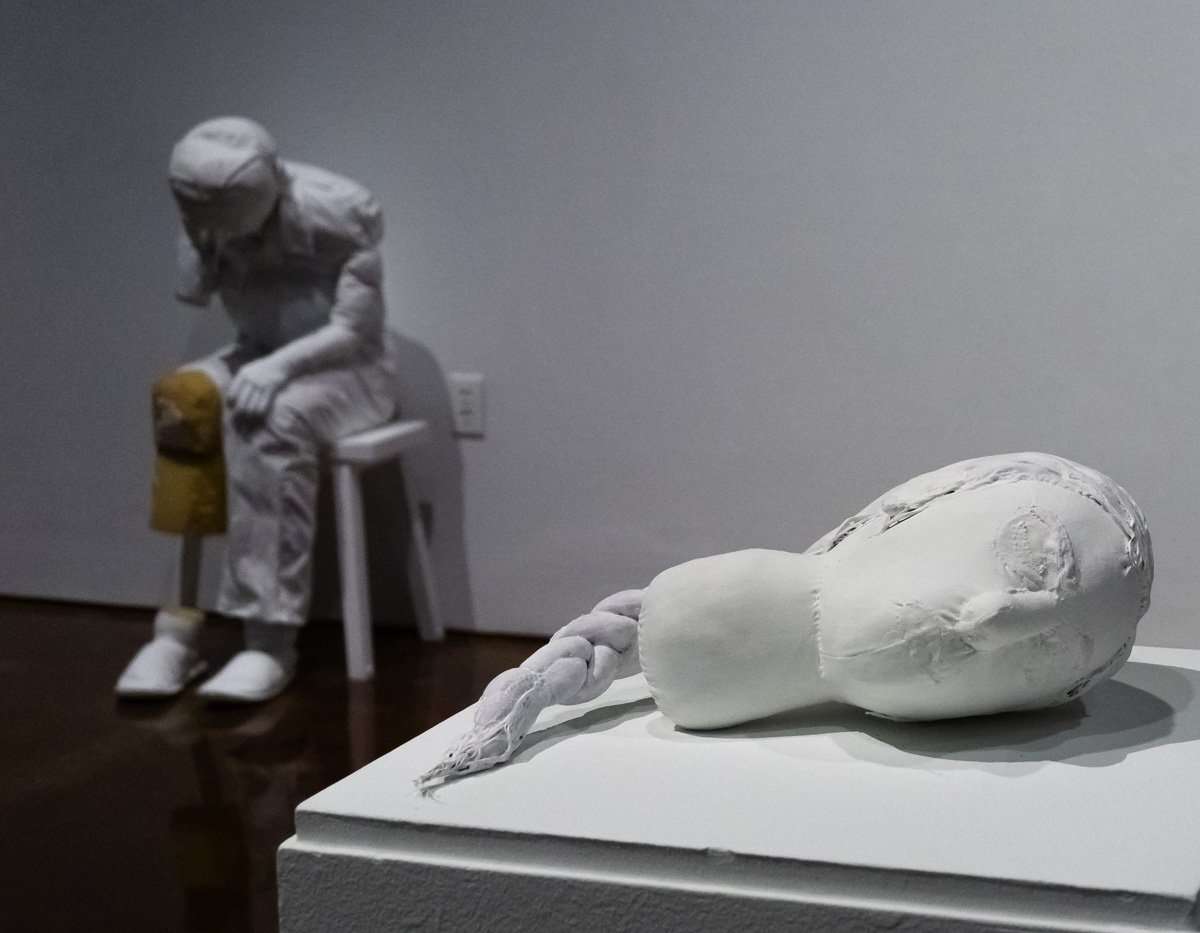 Throughout the 45-minute video, the puppeteer manipulates Althusser and Rytmann through a series of domestic scenes: dreams, nightmares, dinners, work. Almost everything, including the puppeteer, is covered in fabric: the surfaces of the characters’ skin (and, ultimately, viscera), the walls, the floors, lending a soft and almost comforting texture to the scenes, even when what they portray is deeply disturbing.

Each scene surprises; and it wasn’t until the first wide-angle shot that I saw how truly small Hélène’s body is — only a few feet tall, so that when the puppeteer helps her sit up in bed or spoon food into her mouth, their relationship takes on the nature of that of a parent and child. This is an artist who cares for her creations, who literally lifts them up. But there is as much violence as tenderness in the lifting: Hélène’s body is utterly limp, and even holding her head upright requires the puppeteer to grab a fistful of her hair and pull her head back. This stands in direct contrast to Louis’s puppet, which has a much more rigid posture, requiring less external support to hold itself erect.

The paleness of the fabric representing Rytmann’s skin, too, stands in direct contrast with Althusser’s: Though his neck and ears are pale, his face and hands are black. Though I watched the film several times, I couldn’t make sense of this choice, which — particularly given the smooth, masklike contours around Althusser’s face — seemed demonic, verging on blackface (neither the real Althusser, nor the real Rytmann, nor Istomina herself have dark skin).

My main questions leaving the show involved the relationship of the curatorial scaffolding supporting and surrounding the work on the one hand, and the work itself on the other. Prominent wall text at the entrance to the gallery summarizes Rytmann’s murder and tells visitors:

Althusser’s texts continue to be appreciated while Rytman has been forgotten despite her role in Althusser’s life and influence on his intellectual career. In death, as in life, Rytman is silenced—an insignificant woman lost in the shadow of her famous husband. Istomina reconstructs their story from Hélène’s point of view and explores the implications of these events on Althusser’s philosophical theories.

However, the show itself seems to focus much more on Althusser and his work than on Rytmann. After spending several hours in the gallery, relatively unfamiliar with both figures, I left with more knowledge of—and curiosity about—Althusser than Rytmann. As Richard Seymour wrote in a 2017 article for Verso Books, which published Althusser’s “Philosophy of the Encounter” in 2006*:

If there is one thing that anglophone intellectuals know about Hélène Rytman, it is that she was strangled by her husband, the famous Marxist philosopher Louis Althusser, on 16th November 1980. Althusser was massaging her neck when he crushed her larynx and killed her.

While it’s true that “Philosophy of the Encounter” privileges Rytmann’s perspective, it truly is “their story” that the show spotlights, and not her story; his ideas, not hers. Other than in seven pages excerpted from Istomina’s artist’s book, which allows visitors glimpses into Hélène’s perspective, the show seems to give little acknowledgement of Hélène’s life before meeting Louis, nor attend to aspects of her public or private experience that do not directly involve her husband.

If the show intends to bring out Hélène from Althusser’s “shadow,” to pull her from the “silence” to which history has relegated her, it does neither of these things. I couldn’t help but think of the several retrospectives I’ve seen regarding Ana Mendieta, another woman famously murdered by her influential husband, the artist Carl Andre. These shows inevitably mention Mendieta’s violent death, but put her life and work—a sprawling and glowingly living set of films focusing on body and environment, pain and erasure—front and center.

Mendieta, though, was an artist herself, and left behind a body of work that can speak for her. Rytmann cannot speak for herself; it seems the show may be silent about her life because so many details have been lost. Nonetheless, Istomina has chosen to inhabit the perspective and point of view of Rytmann, to literally speak in her voice (particularly through the artist’s book), so the artist’s general focus on Louis — and the lack of Hélène’s autonomous, independent expression — is particularly apparent.

In one scene from the “Philosophy of the Encounter” film, Althusser leans over his wife’s lap, the cigarette permanently affixed to his mouth grazing her skirt. There’s a terrible, haunting sensuality in this gesture, but also a kind of impotence. The always-visible puppeteer reminds us that none of these bodies truly have agency, that they are operated upon by contingent forces.

The cigarette lingers for a while on the skirt before we cut to the next shot. Still, the fabric doesn’t burn.

“Philosophy of the Encounter” continues through Nov. 12 at Texas State Galleries, txstgalleries.org

Annelyse Gelmanhttps://www.annelysegelman.com/
Annelyse Gelman is a writer and artist currently based in Austin, Texas. Her work has appeared in The New Yorker, TriQuarterly, The Iowa Review, the PEN Poetry Series, The Awl, Indiana Review, and elsewhere. She is the author of the poetry collection Everyone I Love Is a Stranger to Someone (2014).