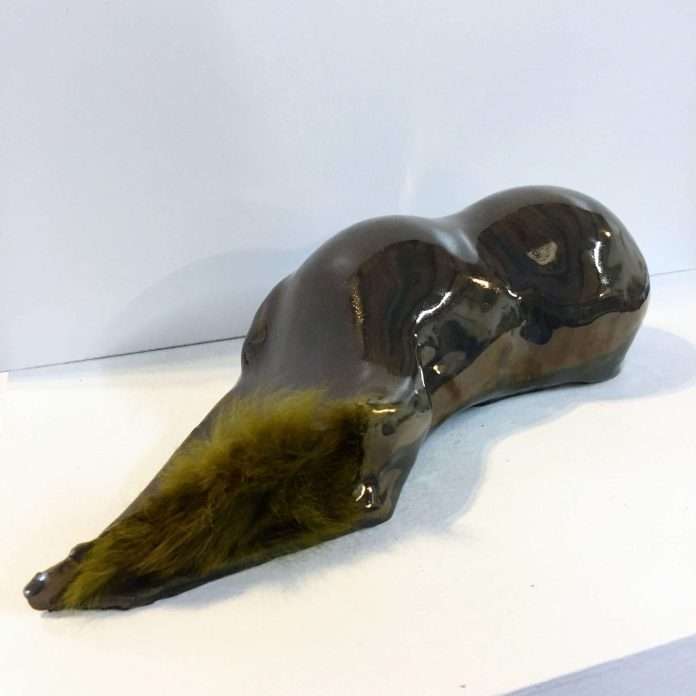 The title for Terra Goolsby’s showing of new work at Dimension Gallery, “Black Rainbow,” derives from an anecdote she tells about her daughter.

“I one day saw my little girl, she drew a black rainbow,” Goolsby begins. “And I thought, ‘What an impossible idea,’ you know? Because light refracts color, how can you refract light through black? It’s the absence of light, so how is that possible?”

[su_pullquote]”Black Rainbow” in on view 10 a.m. to 6 p.m. Thursdays-Saturdays through Sept. 30 at Dimension Gallery, 979 Springdale Road[/su_pullquote]

The third iteration of a sculpture series concerning world mythologies, this story is a form of myth-making itself. What if some unknowable thing like a black rainbow existed? What would we do with it? Goolsby assumes that we would assign it a great amount of perhaps undue power.

After investigating various creation and leviathan legends in her signature style of sumptuous hand-shaped porcelain, it was inevitable for Goolsby that the trope of idolatry would become the next new theme.

Drenched in luxurious and hypnotizing black glaze, Goolsby’s primordial forms have orifices lined with soft green and black fur and glittering crystals. When asked if she minds if people touch them, Goolsby remarkably says no.

“I wanted a really powerful aesthetic that was slick and attractive and tactile, so the really soft fur on the inside and slick exteriors,” she says. That combination makes the sculptures impossible not to want to reach out and feel.

They also conjure an innate ancient desire to behold the power of a beautiful object.

Goolsby traces the sources of this instinct throughout time and fools us into falling trap to it now again. The biblical Golden Calf parable was an obvious starting point with its cautionary tale of idol worship. Goolsby notes, “It seems like a biblical myth always pops up, they’re so old and accessible.”

She mentions more contemporary folktales like “The Dark Crystal” and “2001: A Space Odyssey,” both of which center around an object that secures knowledge and harmony in the universe. It’s this uncertainty — that you never know the magic some objects hold, that you never really know if you’ll get in trouble for touching them — that makes those objects so compelling.

Associations with touch go beyond the act of viewing Goolsby’s sculptures. In her art-making process, Goolsby tunes in to her hands and the power they have to wield and subdue a demanding medium such as clay.

“I feel really close to that material physically, in a literal sense, when I’m working with it,” she says. “There aren’t a lot of tools separating me from the material.”

Goolsby recently returned to ceramics after working for a time in other sculptural media and on projects that had an equal focus on materiality and the meaning we imbue in objects. As matchlessly ethereal as her recent sculptures are, Goolsby recognizes the origins of ceramics in household earthenware made for a most basic human activity: eating.

In that, she makes an abstract relationship with the body by purposefully heightening the bodily aspects of  her sculptures – the distinctly organic shapes that ripple and bend around sensuous fur in an almost uncanny way.

Her rekindled relationship with ceramics nearly coincides with her homecoming to Texas in the early 2010s. She got her BFA at UT Austin in 2004 and from there moved between several artist residencies around the country before landing at RISD where she received her MFA. Since moving back to Austin, she’s joined both Dimension Gallery and ICOSA Collective and exhibited extensively at both.

One of her most formative experiences in ceramics, however, was straight out of high school when she left to study the art for two years in Hawaii.

“The tradition there is a lot of Japanese influence. The woman that I worked under, she was from Japan, I remember she was very strict with us. We spent a very long time just learning how to knead clay.”

The experience granted her with a comprehension of the basics and a sense of discipline. Two decades later, her process is much more fundamental, and the “basics” have been pared down to mainly using just her hands.

Repetition — like the reappearance of ceramics in Goolsby’s career — can be seen all over this body of work. The all-black sculptures fluctuate in only their size and in their tonality, owing to variations in the alchemy inside the kiln during the firing process.

Goolsby’s is an obsessive reworking of the grand ideas that span time and remain ageless because they are so intrinsic to human nature.

“I think in a lot of ways we kind of appropriate the same things over and over again so that they make sense now. I guess I try to do the same thing using the language that I know best, which is sculpture.”