Line Upon Line finds its context

The adventurous Austin percussion trio releases a new album. And yes — there will be free beer. 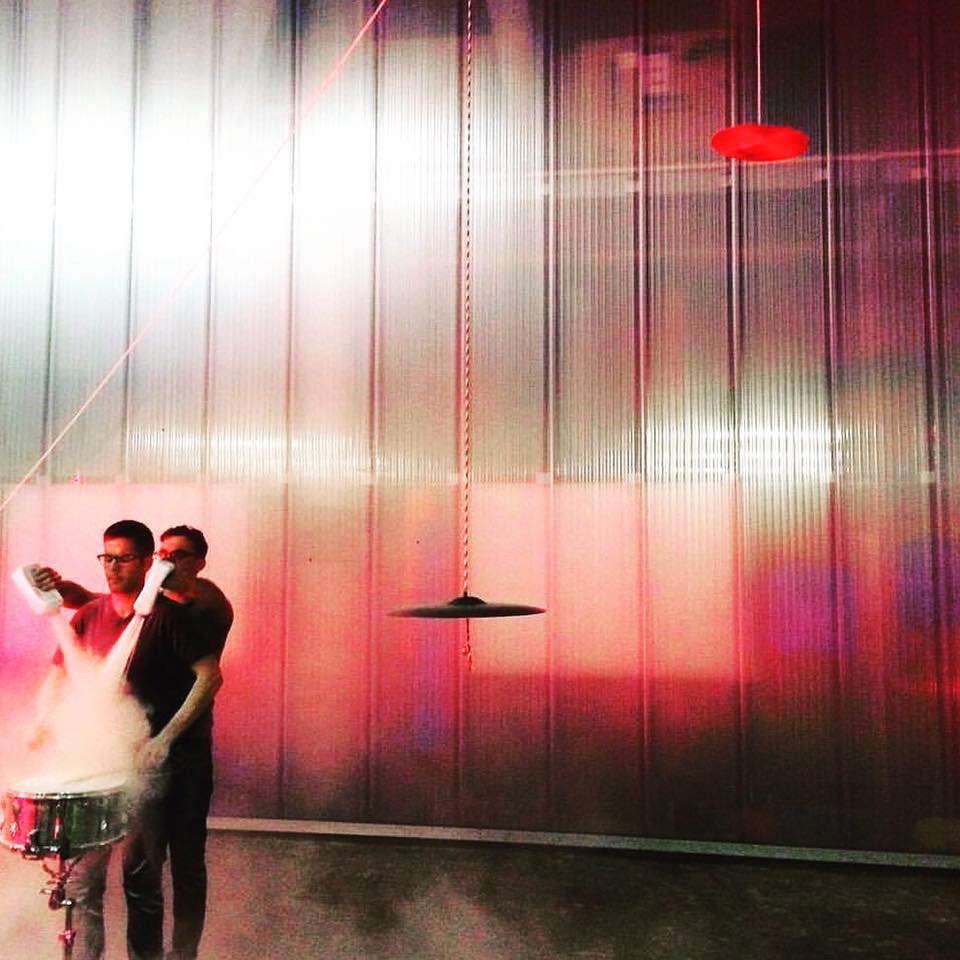 With a poof of talcum powder, Line Upon Line percussion ensemble opened its season in September.

It was a slow pour of powder actually, part of an abbreviated version of Laura Steenberge’s “Perseus Slays the Gordon Medusa,” a piece for solo snare drum. Line Upon Line staged it in the outdoor foyer of Canopy, the East Austin arts complex where they perform their regular concert series at Big Medium Gallery.

Adam Bedell played the snare, while from behind, Matt Teodori poured talcum powder on the drum, a cloud emerged dramatized by colored stage lights and the foyer’s translucent walls.

It was a spirited moment of stagecraft, inviting the audience outside for the concert’s first piece. Then again, part of why LUL is successful in bringing along an audience for now eight seasons is the willingness on the part its musicians — Bedell, Teodori and Adam Cullen — to keep the vibe of their concerts friendly.

The free beer at Line Upon Line concerts fuels the friendly feels too, of course. Ditto the gallery setting with the audience in intimate proximity to the musicians and their sprawling instrumental set-ups. The trio’s conversational introductions before each piece offer a window into the complexities — and charms — of music for unconventional instruments.

When LUL began presenting its regular concert season at Big Medium a few years ago, it performed each program once. Now it presents three shows for each concert program.

Recently, the self-managed trio of Butler School of Music alumni devised another way to connect with their audience: Monthly meet-ups open to all. And yes, the meet-ups are usually some place there’s beer.

Really, Teodori suggests, it’s about deepening the context surrounding Line Upon Line. “We wanted to have another way to talk with our audience.”

Line Upon Line’s next concert — Dec. 1-3 at Big Medium — is a CD release celebration. “Context” is the first album the ensemble has released since 2011. They’ll play the entirety of album: Andrew Greenwald’s “99 Words,” Matthew Shlomowitz’s “Popular Contexts, Vol. 6” and Thomas Meadowcroft’s “The Great Knot.”

Greenwald’s piece — written for snare drums whose bottom drumheads have been removed — is piece commissioned by LUL, something the ensemble has been steadfast at pursuing. Line Upon Line now counts nearly two dozen new commissions to its credit — a rather breathtaking accomplishment for a young and lean new music organization.

“It takes a lot for us to fundraise to be able to commission new music but we have to support composers of our time,” says Teodori.

Yes, people will always turn out in droves to when LUL plays a program of John Cage, Philip Glass or Steve Reich. That’s something the ensemble appreciates of course though it’s a reminder of what kind of mission they established for themselves.

“Even within the niche of new music, we find people will still flock to the familiar,” says Teodori. “But our mission has always been challenge the status quo. Maybe these new composers we’re playing aren’t households names — yet. But they’re the composers of our here and now, our peers.”

Teodori likes to paraphrase something Cage once said about the fear of new ideas.

“Cage said he was never sure why people are afraid of new (sounds) because he was afraid of old ones.”