Ruby City is an art-world fairytale, complete with a shimmering castle, 900-plus works of treasure, and a knight in shining armor. Or, at least, a knighted British-Ghanian architect who designed the stunning 14,000-square-foot space, which recently opened in San Antonio’s Southtown arts district.

The only thing missing is the fairy godmother who made the whole thing possible: Linda Pace, who died of cancer in 2007 at the age of 62, not long after dreaming up (literally) a museum to house her own artwork and extensive personal collection. Having been one of San Antonio’s Texas’s most important arts-and-culture heavyweights — a philanthropist, patron, and artist herself — Pace’s spirit and legacy are both far-reaching and now beautifully contained in this architectural tribute to her life.

I didn’t know much about the woman behind Ruby City before it opened in mid-October. While sitting at a bar on New York’s Upper West Side, I told a good friend about my plans to visit as soon as I returned to Texas. “Is she the Pace of the PaceWildenstein Gallery?” he asked, referring to the now defunct powerhouse gallery on 57th Street.

“She’s the Pace of Pace Picante,” someone blurted from the other end of the bar — a San Antonio native, as it turns out, who has lived in Manhattan longer than Texas. My friend and I replied with a synchronous ‘Of course!’ before turning back to our drinks and trying to find the joke in there; PaceWildenstein and Pace Picante, how one was from New York City and the other ran an ad campaign which swore off New York City.

Linda Pace certainly didn’t mind salsa made in New York City — she was involved with both the Whitney Museum of Art and Dia Beacon — though her love for contemporary art deep in the heart of Texas always played first fiddle. She founded Artpace San Antonio in 1993, a residency program that has nutured the career of more than 200 artists, many now A-listers, and also served as an important catalyst for contemporary art in Texas in the 90s, and later. Pace was San Antonio’s modern-day Marion Koogler McNay (founder of the McNay Art Museum, the oldest modern art museum in Texas), and like her predecessor, Pace had the money, artistry, and complexity to make something like Ruby City happen in her hometown.

I am the first to arrive one recent Sunday morning, just before 10 a.m. A bright, childlike voice sings me toward the entrance as I quickly scan for steeples. Church must be getting underway.

The sweet-sounding tune is “Banks of the Ohio,” a murder ballad born sometime in the 19th century, about a man who kills the woman he loves when she refuses his hand in marriage.

Guthmiller kindly brings me to the park out back, a happy sprawl of lawn and newly planted flowers and trees. He points out the flecks of red glass in the building’s aggregate above us which, he explains, were quite sharp to work with. It certainly does sparkle like rubies in the mid-morning sun — funny how something so pretty could be such a pain. Small butterflies coat the row of succulents and wildflowers swaying against the building, some kissing their own fluttery reflections in the mirrored wall, doubling the whole dreamy display.

One end of this outdoor space is largely occupied by Nancy Rubins’ “5,000 lbs of Sonny’s Airplane Parts, Linda’s Place, and 500 lbs of Tire Wire” (1997), an imposing sculpture which rests on a diagonal like some highly stylized plane crash.

The other end contains a set of sleek black tables and chairs designed by Ruby City’s architect, Sir David Adjaye, who Linda Pace commissioned soon after having her dream—and not long before passing away. Adjaye and Pace knew each other for years (and before the architect’s international ascent), having been introduced by friend and filmmaker Isaac Julien, whose work is prominently featured in Linda’s collection. Pace intuitively picked Adjaye for the project long before she ever dreamed of her city in red — which took 11 years and $16 million, for it to finally come true.

The building appears more rose-hued than red from a distance, its color only coming into full focus while walking along Camp Street. Not quite a museum and not only an art center, Ruby City is the physicalization of Pace’s foundation, giving access to the art collection that she personally amassed and what has since been acquired in her name. A whimsical utopia where world-class contemporary art and a local community converge, Pace’s fairytale is free and open to all.

The lobby contains a cherry red collage by Pace herself, a large chunky square which hangs on the wall like a blueprint (or redprint?) of her creativity and her clear affinity for the deliciously ripe color. “Red Project” (2001) is stuffed to the gills with Teletubbies, tongues, boxing gloves, and blood-red boas. An unfettered celebration of all things ruby. A tabernacle of Linda’s iconoclasm to greet every visitor upon entering her space.

A tripartite of inaugural long-running exhibitions are currently running: “Waking Dream,” “Isaac Julien: Playtime,” and “Jewels in the Concrete.”

“Waking Dream” features work ranging from internationally-renowned contemporary artists to local and emerging figures; it also includes Pace’s own work. The exhibition shows off both her curatorial fluidity and fluid curiosity as both an artist and collector. Not to mention, she clearly knew a lot of people in the art world.

Massive wall pieces and floor installations fit like a proverbial glove in the second-floor gallery. Cornelia Parker’s “Heart of Darkness” is a deconstructed forest fire delicately suspended in air, pieces of burnt black wood hanging like charred garland. Robyn O’Neill’s graphite on paper “Staring into the blankness, they fell in order to begin” (2008) is a whopping 12 feet of apocalyptic monochromatic abyss-plunging. Korean artist Do Ho Suh’s highly Instagram-able purple mesh hallway has plenty of room from all angles for that perfect photo. And Marina Abramovic’s “Chair for Man and his Spirit” (1993) is an interactive opportunity to take a seat on the artist’s iron sculpture and embark on one of her signature marathon stare-a-thons with an adjacent white wall.

Isaac Julien’s 64-minute video “Playtime” (2014) touches on the same modernity-cum-technology curse as in Jacques Tati’s 1967 French comedy of the same name. Whereas Tati’s film presents a playful dilemma, Julien’s take on globalization and capitalism has a much darker message. His three-screen immersive video installation, in a gallery-turned-theater, draped in royal blue, has the feel of a Hollywood film (it doesn’t hurt having James Franco in it). Surround-sound and ultra high definition images all but grab the audience by their collar, creating a veritable high-art IMAX experience. 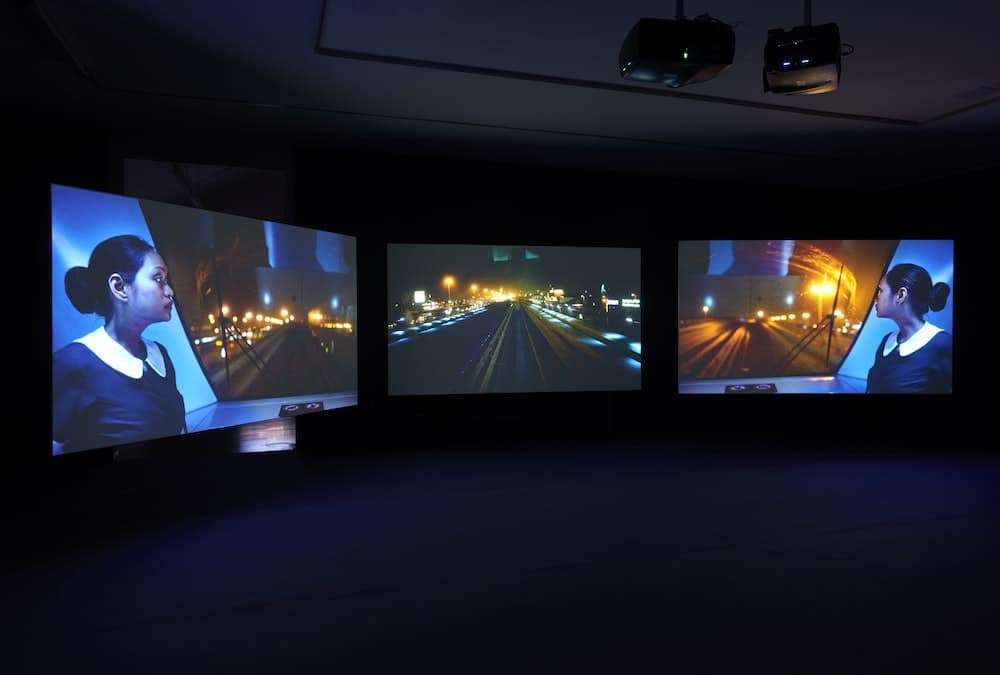 Each of “Playtimes’s” five film segments loosely connect around the 2008 financial crash: a London-based hedge fund pulsing with hard bop, the muted desperation of one man’s housing crisis in Iceland, Franco’s economic analysis of acquiring art with insane amounts of money, to a high-strung auctioneer in charge of selling that art, and finally, the grotesque cultural paradox of Dubai.

Julien’s film is unsettling and alluring, its low tones and strong images — of a finance big wig blasting away on a trumpet, a Filipina maid standing all alone in the Arabian desert, the incendiary strike of a gavel, signifying a $120 million art sale — bring you to a pressurized place in your own mind before narrowly escaping another global meltdown.

“Jewels in the Concrete” is the radiant diamond complementing the red ruby across the way: white gemstones embedded along the pathway of Chris Park catch the corner of your eye en route to Ruby City’s auxiliary gallery, Studio. Inside Pace’s “Mirror Mirror” (2006) sits in the center of the floor, a glittery sculpture best described as the love child of an igloo and disco ball.

A second video installation by Issac Julien is tucked in the Studio’s back gallery space, playing across five staggered portrait screens. Unlike “Playtime,” “Stones Against Diamonds” is more evocative than narrative, lacking the same cinematic storyline, though sharing the same visually powerful high-def experience. If Iceland were a gemstone, it would most certainly be a diamond, which is likely why Julien chose to shoot there for this glacial meditation on precious gems verses priceless beauty.

Studio is not a new gallery however; it did not open with Ruby City. Nestled on an acre just down the street (and directly across from Pace’s old Camp Street apartment), the tranquil outdoor space opened in 2005 to honor Christopher Goldsbury, Linda’s late son, who died in 1997 at the age of 24.

Lush and bamboo-dense, with its visual experiences conceived of by artist Teresita Fernández, Chris Park feels more like Southeast Asia than San Antonio, with little hints of Pace’s son here and there. “Journal Benches” memorialize Chris’ handwriting etched in stone and bright color circles containing lines from the nursery rhyme, “Monday’s Child,” fill a section of walkway. “Wednesday” has been substituted for “Monday,” the day of the week Chris was born. It is not difficult to imagine Linda Pace walking these grounds every day while she was still alive.

Whereas Ruby City is a dying woman’s dream, Chris Park is a mother’s love for a child who died too young. Linda Pace’s life may have been a grim fairy tale in some ways, but it certainly had a happy ever after, with this sparkling gem on an otherwise quiet city block. At last, the fairy godmother has granted us her wish in red.

The Line-up: A dozen museum shows in Texas to see this summer