KDH Dance created a socially distant dancework to be performed on the lake. Then the city shut them down

Choreographer Kathy Dunn Hamrick posts short videos of her work-in-progress on her KDH Dance Instagram account. I always enjoy seeing the snippets of new work from choreographers. But like for most performing artists, the pandemic forced a full stop in Hamrick’s artistic practice.

Then last month, beguiling images popped up on the KDH Dance feed. They showed trios of dancers, each on an individual floating platform somewhere on Lady Bird Lake. The dancers moved through various sequences of graceful movement, sometimes in unison, sometimes in an overlapping canon, sometimes in solo moments.

There’s always a sense of miraculousness to well-executed dance movement, the defiance of gravity, the purely corporeal expression of emotion. And on the water there was a bit of extra miraculousness with dancers balancing on their quivering, floating platforms.

Hamrick’s creative collaborator, lighting and stage designer Stephen Pruitt, an avid paddler on the lake, had long wanted to stage a floating dancework. He designed and built the platforms each of which would be towed by a kayaker.

“This was all Stephen’s idea,” Hamrick told me in an email. “He’s wanted to collaborate on an outdoor performance for years, but I have always declined — until now. It took a pandemic to make me move outdoors, away from theaters where I have produced work for over 30 years. But his vision for a performance on the water was such a perfect fit for our time.”

The pair planned to present “At a Distance” for free over the course of couple of weekends. The show would be pop-up style — informal, free and no seating would be offered. In fact, the dancers would move slowly down the lake to discourage any crowding along the lakeside. Hamrick didn’t publicize the plans widely, just a few social media posts.

However, somehow, just days before the first the city’s Office of Special Events got wind of the performance plans. Pruitt and Hamrick were told they could not stage their show.

“I don’t know how they found out,” Pruitt told me. “But they said we would need a permit to do it and they weren’t issuing any permits for anything now.”

The city shares jurisdiction of the lake with the Lower Colorado River Authority. The city’s Parks and Recreation Department oversees the parkland along the lake.

After taking a breath, Hamrick and Pruitt decided to go guerilla. After all, the dancers had already rehearsed learned the choreography. The costumes were already purchased, and money already spent on the design and building of the floating platforms. Kayakers had volunteered to tow the platforms.

“Doing it as a pop-up, just for whoever happened to see it, wasn’t any different than what’s been going on lately on the lake,” Pruitt said, adding that their distancing and masking protocols were stricter than most observed behavior around the lake.

The lake is packed these days with paddlers and boaters, many forming flotillas. The trail is crowded daily with walkers, runners, cyclists. Personal trainers are back to using lakeside parks with their clients, pick-up games of soccer fill nearby fields.

Hamrick and Pruitt told no one of their pop-up plans. And over the course of a few weeks,  — sometimes in the morning, sometimes just before sunset, and sometimes at dusk — KDH Dance Company performed “At a Distance” for whoever happened upon it. 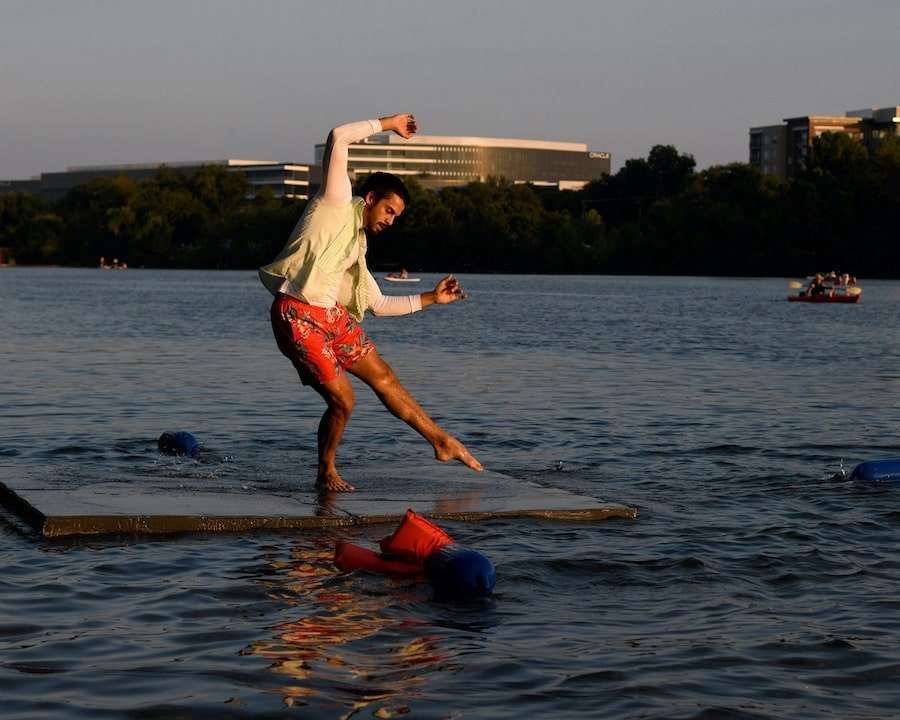 Hamrick let me know just few hours before the last show was set to run so I could attend. And on preternaturally hot Saturday as the sun went down, I watched a live performance for the first time in more than six months. Dancers on their precarious platforms moved through lissome, meditative sequences. I watched how passersby came upon the show with joy: A group of friends on the trail shouted “thank you,” a couple in kayaks applauded, paddle boarders circled around, two Spanish-speaking mothers with young children remarked how pretty the dancers were.

“I told more people about Kathy Dunn Hamrick Dance Company in the past few weeks than I have over the past 20 years,” Hamrick said. “We performed for a diverse crowd of people, most of whom had never heard of us. They asked questions, remarked on our creativity and ingenuity, and thanked us for what we were doing. Children danced on the bank, bikers and walkers stopped to watch, and kayakers and paddle boarders idled in the water to get a close-up view.”

While Hamrick found the joyous reception from her spontaneous audience refreshing, and deeply satisfying, it didn’t erase the maddening frustration of having her original plans derailed by the city.

“Producing the lake dances exposed the difficulties of working with the city — the confusing and haphazard application of pandemic guidelines, the numerous and glaring exceptions to the guidelines, and the need for arts advocacy, out-of-the-box thinking, cooperation, and practical support to get Austin artists working again,” she said.

And the frustration wasn’t about lost revenue. Hamrick knew it would be an expensive endeavor to produce a complicated show for free. But money isn’t a motivation for her. Art is.

“It was important to both Stephen and me that we produce something beautiful, free, and accessible to the public right now, especially during the pandemic, when many of us are yearning for a safe, in-person, cultural experience,” she said.