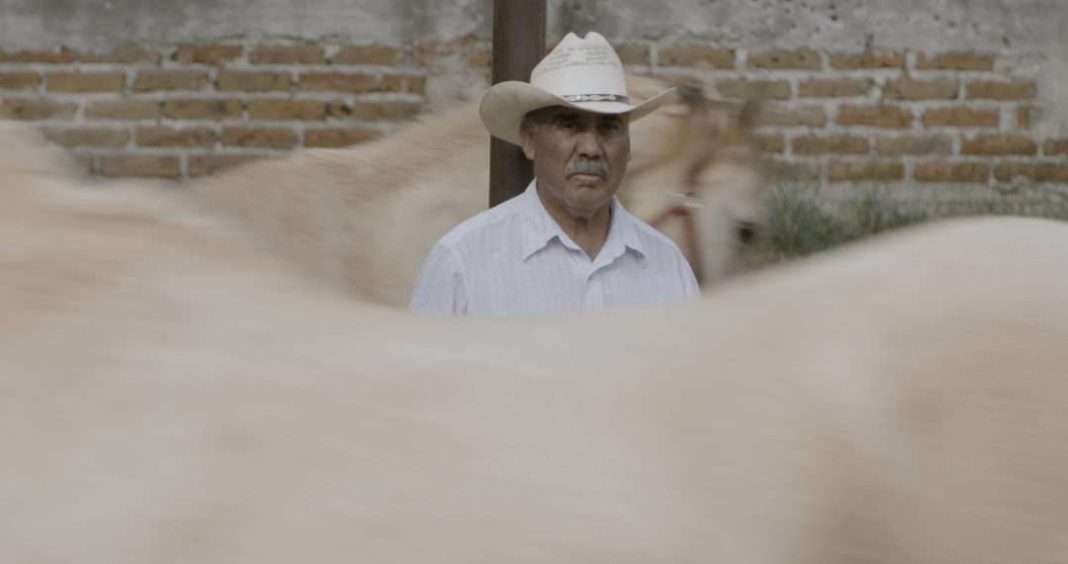 In the process of trying to understand why a young horse trainer committed suicide, documentary filmmaker Juan Pablo González paints a vibrant portrait of a mountain village in the Mexican state of Jalisco in “Caballerango (Horse Wrangler).”

The feature film screens on June 2 at Austin Film Society Cinema as part of Doc Days, AFS’ second annual festival of new non-fiction films. Doc Days screens ten films May 30 through June 2. González will be at the 3:30 p.m. June 2 screening of “Caballerango.”

In his 61-minute film, González follows a strict aesthetic style, observing people and places through a series of 37 shots, each carefully composed with a stationary camera. Maintaining a respectful distance, his camera steadily observes whatever is before it but never intrudes, explains, or draws attention to itself.

One impressive example of this self-assured approach to filmmaking takes place in a partly lighted room whose adobe walls have not yet been covered with stucco. A husband and wife, somewhat past middle age, sit next to each other on a small couch. They are isolated on the left side of the screen. On the right side is a solid black mass blocking our view of the TV the couple half-heartedly watch.

The woman reminisces about her youngest son, Nando, continuing a conversation we were not privy to: “He just couldn’t help laughing.” Her glance at her husband elicits no immediate response, until finally he adds, “They had taken the air out of Don Lupe’s bike tires.”

The man, José Bolaños, runs his fingers under and over his eyes — perhaps to divert a tear — while adding, “He could be a headache.” The woman rhetorically asks, “Because of his mischief?” As her husband answers affirmatively, she rubs her left arm, lost in thought, subdued grief, and memories of a son now departed, not to a large Mexican city nor to the United States, but to the nearby cemetery in their small town of Milpillas.

This scene with the Bolaños lasts a bit over two minutes and yet the camera never pans or zooms. It’s as though we are seated in the same room, quietly observing the couple remembering their dead son.

In an interview by email, González explained his reasons for employing a stationary camera-on-a-tripod point-of-view.

“It’s important for me to make viewers aware of the passage of time in my films. Time is so related to grief and memory,” he said. “The film gives plenty of space for the viewer to reflect on what they’re watching as the film is happening. It needed to have that space and not be filled with information.”

A nighttime shot immediately following the Bolaños’ watching TV provides a different rationale for putting the camera in one place and letting it record without stopping. We first see a street in the village with a scattering of people on either side. Our attention, inevitably captured by movement, is first drawn to a man, some kids, and a tiny dog, harbingers of a large group in the distance. Heralded by a drum and rattle, a religious procession slowly approaches. We are stuck in the road, incapable of moving, simply watching as the procession moves relentlessly toward us in celebration of Semana Santa (Holy Week).

As the procession gets closer to the camera our eyes dart from one face to another, trying to discern their emotions. González explains this different reason for using an immobile camera: “There are durational shots but there are also shots where information is very dense, so we need time to process that information as the film advances.”

These two shots exemplify the calm, contemplative style that González and his director of photography Jim Hickcox developed for the 61-minute feature documentary, an Austin Film Society grant-funded film.

“We had very specific rules and everyone who’d shoot, including me, followed them,” González said.

Besides pursuing possible reasons for Nando’s suicide, the director sought to depict the major 21st century transformation of rural Milpillas.

“That transformation changed completely the labor and economic landscapes of the region and it has affected many families until today,” González said.

Globalization and the economic opening of Mexico under free-trade agreements dramatically shifted the focus of Mexican agriculture, diverting it from the needs of its own citizens to the demands of the United States, its largest international trading partner.

In “Caballerango,” José Bolaños reveals that he no longer bothers to raise much corn because the price is so low. His brother Jesús states that corn is cheap “only when they buy it from us. Then they resell at higher prices. Then the rich get it in their warehouses and raise the prices again. I wouldn’t say ‘No’ to bringing back Pancho Villa.”

González’s film suggests that such economic struggles are one factor leading to a string of suicides in region around Milpillas, of which Nando’s was one.

But it’s Nando’s death that threads through “Caballerango.” The young horse wrangler, trained by his father from an early age, hanged himself. Or as his brother José suggests, he simply snapped his neck with a tethered rope and a sudden jump forward — somewhat similar to a jailhouse “hanging.” Why Nando did this, no one knows for sure, but everyone has their theory or memory of that day.

His father José fears that a heated argument they had may have led to his self-destruction. Nando’s older brother José (Jr.) says that the young man was always making fatalistic statements that presaged this final act. Nando was apparently in a great deal of psychological pain – drinking excessively and obsessively racing horses despite losing bets on himself.

Nando’s sister Verónica describes her own memories while she manicures a friend’s nails in her informal salon. The day of her brother’s death contained a second death — that of her unborn child through a miscarriage. Verónica speaks about both tragedies rather matter-of-factly, reinforcing the calm tone of the film.

But she surprises us when she suddenly addresses the off-camera director: “Nando was going to race that day with your dad’s horse.”

Earlier in the film there is mention of the patrón but there was no indication that the boss was the father of the director.

No wonder that González adopted a style of quiet observation. He knows the people in the film, indeed has known them for much of his life, but he does not want to use that familiarity to impart his own values, beliefs, or emotions.

“I was raised in Atotonilco el Alto, the municipality that Milpillas belongs to,” González said of his long relationship the Bolaños family. “I went to a very small school, everyone in town knew each other. We’d walk to school every day and the country was completely accessible to us. Our relationship with nature and animals was very direct.”

“I started going (to Milipillas) as a kid because someone gave a horse to our parents and they did not have a place to keep it nor did they know how to take care of it. Milpillas was famous for its horse wranglers so my parents rented a stable there from Jesús Bolaños, José’s brother.”

On his visits to Milipillas, González got to know the entire Bolaños family.” José Jr left for the U.S. when he was 14 and I was 13,” González recalls. “I didn’t see him for 15 years after that. [The father] José and Nando worked on my father’s ranch for many years.”

González’s observational documentary is, then, actually a very personal testimony. Despite the class differences between the director and his subjects, González obviously respects and cares about the people in his film. He even purposely retained the confrontational statement about Pancho Villa to reveal “an awareness of class and history from rural farmers that many people in the cities think doesn’t exist.”

Using wide shots of long duration and letting the people talk of their memories, González invites us into their lives and their world. Rather than directing our emotions through close-ups, photos of Nando, and a videotape of the funeral itself, González gives us the freedom and time to take these people on their own terms and explore our feelings about them and their loss.

González left home for his college education, studying at the Tecnológico de Monterrey where he met and worked with animator/directors René Castillo and Luis Téllez. After a stint in advertising, which he deems a “a brutal industry in Mexico — extremely racist and problematic in terms of its ethics toward labor” — he came to the University of Texas to acquire an MFA in Film and Media Production. González now teaches in the Film Directing Program at the California Institute of the Arts.

But Mexico is never out of the picture for González. His 2014 short “¿Por qué el recuerdo? (The Solitude of Memory),” netted  González a place on Filmmaker magazine’s list of “25 New Faces of Independent Film” in 2015.

And he’ll return to Atotonilco del Alto for his next project, “Dos estaciones,” to train his lens on the region’s tequila production, one of the largest in Mexico. González describes this new film as “about the presence and the role of global corporations in the reshaping of labor traditions regarding tequila production in the region.”

While Atotonilco del Alto gains a native son intent on sensitively documenting it, the film-going audience is witness to the beginnings of an important new filmmaker.