J Muzacz and the art of community art

The Austin muralist and public artist produces "ATX URBAN ART," an encyclopedic book documenting the graffiti, murals and street art of the city 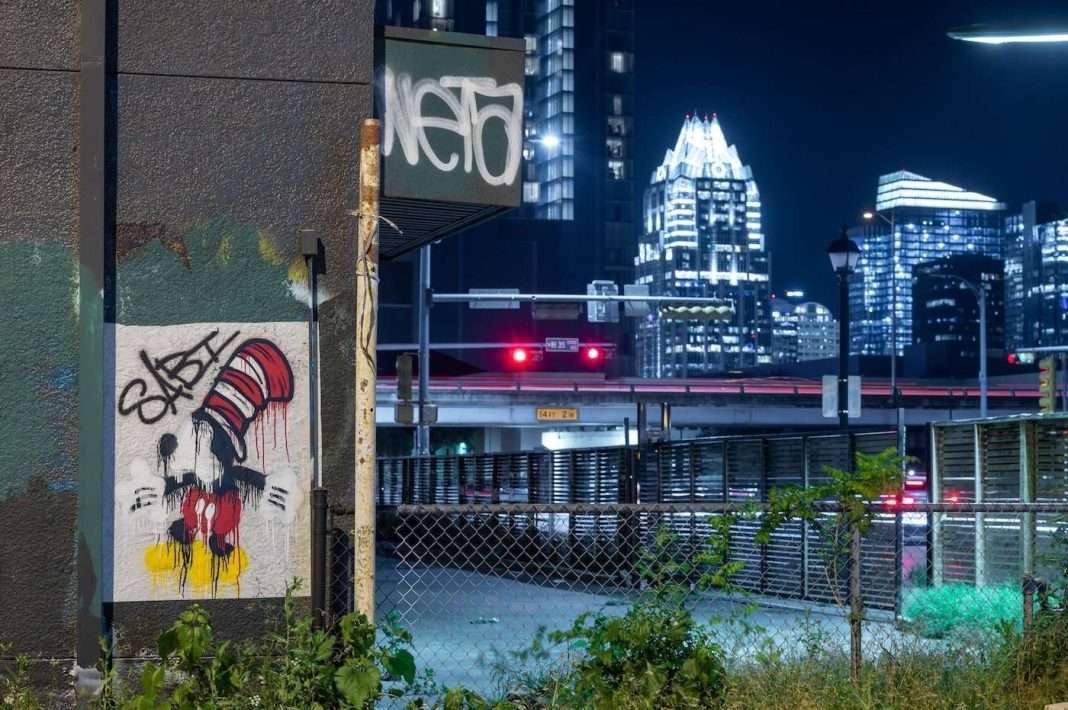 Community is the driving force behind J Muzacz’s art.

The Austin muralist and public artist came to that realization in his 20s when teaching graffiti and mural-painting in a city run-program at several Austin recreation centers.

“It was about asking people what they actually want in their neighborhood,” Muzacz says.

And for the students charged with making the art, it came to encouraging them to reclaim their community space. “(I’d ask) ‘what do you want to make? This is your center. I’m leaving in five weeks, and you’re gonna still be here, so what do you want in your space?”

That commitment to community led Muzacz to what might just be his magnum opus.

With more than 2,000 photographs, the door-stopper of a publication features the work and words of 128 artists who have brightened Austin walls. (Personally, some 68 of my photos of graffiti murals created in the mid-1980s by Skam and Kane are included in the book.) 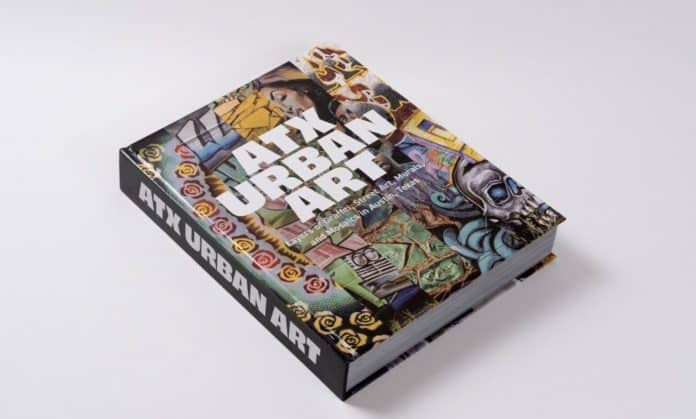 With a forward by Austin grafitti artist Sloke One, “ATX URBAN ART” showcases the city’s graffiti, street art, murals, and mosaics from the 1950s to today.

Muzacz’s ideal of community creation had a circuitous route. He describes his parents as nomadic hippies. His sister was born in a barn. He was born in a bathtub in the Houston suburb of Alief in 1984, an indicator that his parents had at least begun to settle down.

Nevertheless, a divorce ensued. Then his father died when Muzacz was nine. He credits his mother with his approach to life. “She was loving and supportive of whatever I was doing, allowing me to follow my passion.”

His passion was art. At six Muzacz was drawing dinosaurs on napkins. Two decades later he made a ten-foot-tall brontosaurus out of upcycled wood pallets, chicken wire, and papier-mâché, painted it with almost green Oops Paint, and placed it in the front yard of the East Austin co-op where he lived. Eventually the sculpture went to the Burning Man festival.

High school brought some excellent art classes and teachers, who offered the students the freedom to express themselves. Muzacz and his Art Club buddy went out at night and sprayed “shitty tags in the bayou,” Muzacz recalls. He tagged as “SLIME” and his buddy tagged as “PEAS.” It was the first step toward a love of painting on walls.

In 2002 Muzacz came to Austin to major in sociology at the University of Texas. There, professor Lester Kurtz, passed on the freedom to think and explore wide ranging topics, planting the seed that community was paramount.

After selling small canvases that he quick-sprayed for club-going crowds on E. Sixth St., Muzacz hungered to go big. While working as a cook at Cherrywood Coffee House, he went next door to the Monarch Food Mart convenience store and offered to paint the life cycle of a monarch butterfly on the building’s big, blank wall for $200. The proprietors agreed and most of the budget went to supplies. It would be the first of many public murals Muzacz has made around Austin.

After a backpacking trek through Europe, Muzacz landed back in Austin and applied to teach the Totally Cool Totally Art youth program. The application form had an enticing blank space: “Pitch your ideal curriculum.” He wrote “urban painting, graffiti and street art.” And that’s what he ended up teaching. His students learned about tagging, the history of graffiti, bubble letters, stencils, wheat paste posters, and murals.

“We ended up doing probably a dozen murals around town at rec centers or neighborhood businesses,” Muzacz says. He would also approach businesses nearby the recreation centers where he taught and propose his students paint.

“I’d tell (business owners) that their blank outdoor wall keeps getting tagged with all kinds of shitty vandalism, so let the student do a mural there instead,” he says. “We’d paint more colorful graffiti letters and put some time into it.”

Once more, the idea of community proved a dominant part of Muzacz’s approach to art.

“You’re not just one person painting anymore sitting in a sterile studio space,” he says. “You’re out with 10 people, amateurs and experts alike, and you’re all attacking this wall together. And you can make some massive change and impact with solidarity, with a shared vision.”

Realizing that he really enjoyed teaching, Muzacz decided to see more of the world. First up was South Korea in 2008. But instead of art he was hired to teach English at a private elementary school.

Still, art could not completely disappear from his life. Eventually he was introduced to two Korean graffiti writers, and together they created graffiti murals on walls and in tunnels around the Hongdae University district in broad daylight on weekends. The country had not yet passed anti-graffiti laws.

Soon Muzacz and his new friends were taking their skills to other parts of South Korea, and he was learning a lot more than new techniques.

“I realized (graffiti art) is a worldwide phenomenon and community because now I can go up to people that don’t speak the same language. ‘You paint? I paint. Let’s go paint’,” he says. “You talk on the wall, you bring your colors up, you speak through the art.”

After a year back in Austin, Muzacz returned to Asia, but this time to the country which had already deeply touched his soul, Japan. He secured a job with an exchange program and was sent to a tiny fishing village in Kyoto Prefecture, three hours from the city of Kyoto.

Even though there were no places to paint murals, Muzacz had a very adventurous and wonderful year. He met his future wife, Yuki Takata, who loved hip hop, rode a motorbike, and had been into lowrider culture during her student exchange experiences in the U.S.

With no blank walls in sight, Muzacz decided to create ball pen sketches of the village and elsewhere: landscapes, trees, flowers, rice paddies, food, gods and monsters, temples and shrines, modes of transportation, graffiti, art, architecture, musicians, dancers, fashion, and people of every age. He also drew scenes of devastation from the tsunami and typhoons. Doing one-a-day throughout the year 2011 finally led to his book “Japan 365,” a drawing-a-day project.

Then Muzacz and Yuki embarked on three-month bike tour of Japan which culminated on the tiny island of Ishigaki, where he learned the strenuous job of cutting down sugar cane on a farm belonging to a friend of his wife’s father. That exceedingly rough experience led to Muzacz’s second book, an illustrated picture book in English and Japanese, “Life Is Sweet, The Story of a Sugarcane Field.”

After time in Australia and New Zealand, where Muzacz was able to get back into mural painting, the couple returned to Austin in 2015. Once again, Muzacz took up teaching mural-making to youth.

These past seven years have been exceedingly busy for the artist. He has created 14 individual murals (eight in his signature mosaic style) and four mural series, participated in nine group exhibitions and had three solo exhibitions. He also runs a mosaic mural workshop at the co-op Something Cool Studios.

As Muzacz writes in the introduction to “ATX URBAN ART” most street art is unsanctioned, but it is singularily about community. “Artists created these works for the public to view and interact with freely as part of the ever-evolving fabric of our daily lives.”

An exhibition of works by some of the artists featured in “ATX URBAN ART” will be on display Saturday and Sunday 10am – 8 pm through Nov. 20 at the pop-up gallery at 2324 E. Cesar Chavez