It’s About the Clogs: Wunderbaum’s “The History of My Stiffness”

REVIEW: "The History of My Stiffness” was by turns funny, manically energetic and occasionally baffling

When people hear the word “Dutch” they almost certainly picture the classic wooden shoe, the clog.

At least that’s what Walter Bart and Marleen Scholten of the Dutch theatre collective Wunderbaum were betting on when they set out to create “The History of My Stiffness,” a world premiere performance that debuted last week at Fusebox.

Wunderbaum is known for their risk-taking and provocative aesthetic. At their last Fusebox appearance in 2014, they performed “Looking For Paul,” a riotously absurd performance about a piece of public art in Rotterdam with a vulgar nickname.

For their latest work, they wanted to explore the relationship between culture, history, and movement, particularly as it related to Dutch identity. In an interview with Fusebox artistic director Ron Berry and curator Betelhem Makonnen, Bart and Scholten explained that the question of what it means to be Dutch is critical in the current political climate of The Netherlands.

Which brings us to the clogs. 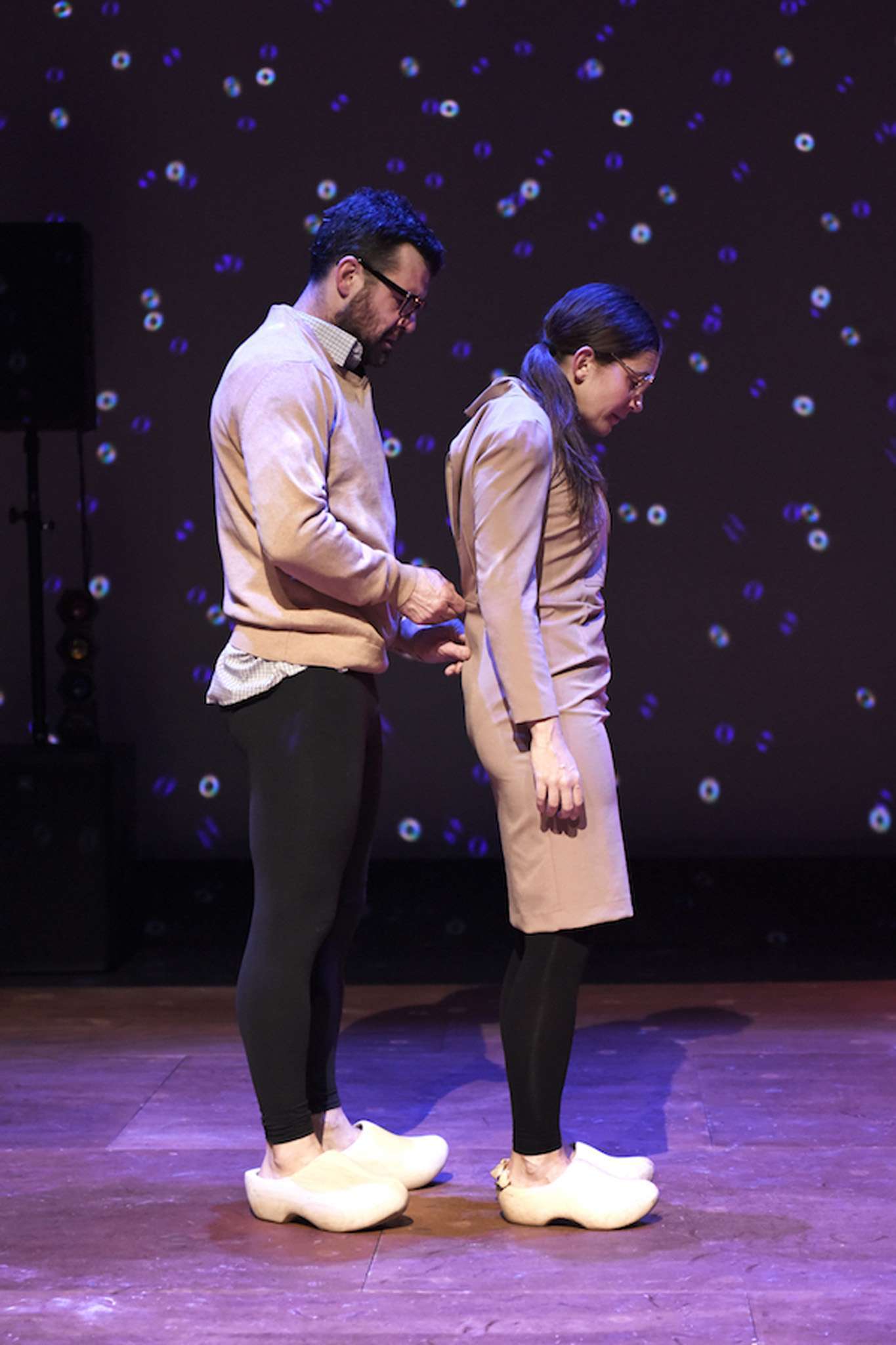 “The History of My Stiffness” began as Bart and Scholten, their feet adorned with heavy wooden clogs, entered the cavernous space of the Fusebox hub, a converted warehouse. Their upper bodies remained still while their feet stomped furiously, loudly. The duet was long and exceedingly awkward.

Next they sat at a bar, nodding their heads in unison, appearing to watch other people on the dance floor. They launched into a funny demonstration of what kind of dancers you would find on a Dutch dance floor, types that include “the fitness guy” who proudly shows off his physique and “the funky disrupter” who tries to dance differently than everyone else.

The show unfolded as an anthropological case study of culture and movement, with a heavy dose of humor sprinkled in. Bart and Scholten threw themselves wholeheartedly into all kinds of physical scenarios, from a clunky ballet duet, to a passionate “chair dance” at the bar, to the wild and aggressive physicality of two drunken sports fans. Throughout the piece, the performers poked fun at their own inability to move with grace.

In one particularly comical scene, a smooth moving couple dancing to Latin grooves joined the Dutch pair on the dance floor, a study in contrasts. As Bart and Scholten tried to keep up and capture that same sense of fluidity, they grew more and more frustrated and eventually gave up and returned to the bar.

The piece also featured some cameos from Austin residents, who performed a Texas line dance and let loose with solo dances that drew attention to their uncoordinated moves.

At the end, the weight of history made itself visible. Bart and Scholten donned traditional Dutch costumes and giant clogs that looked to be made of logs. As they danced, the shoes dragged them down into the ground, their upper bodies rigid, their faces blank. It was a literal manifestation of how we can’t escape the roots of our cultural movement traditions.

Despite a slow start and some acoustical challenges due to the vastness of the space, “The History of My Stiffness” was by turns funny, manically energetic, and occasionally baffling.

In other words, it was vintage Wunderbaum.

Claire Canavan
Claire Canvanan is an Austin critic and writer. She currently teaches creative drama and contemporary theatre at Texas State University. At the University of Texas at Austin, she earned an M.F.A in Drama and Theatre for Youth and Communities and a Ph.D. in Performance as Public Practice.