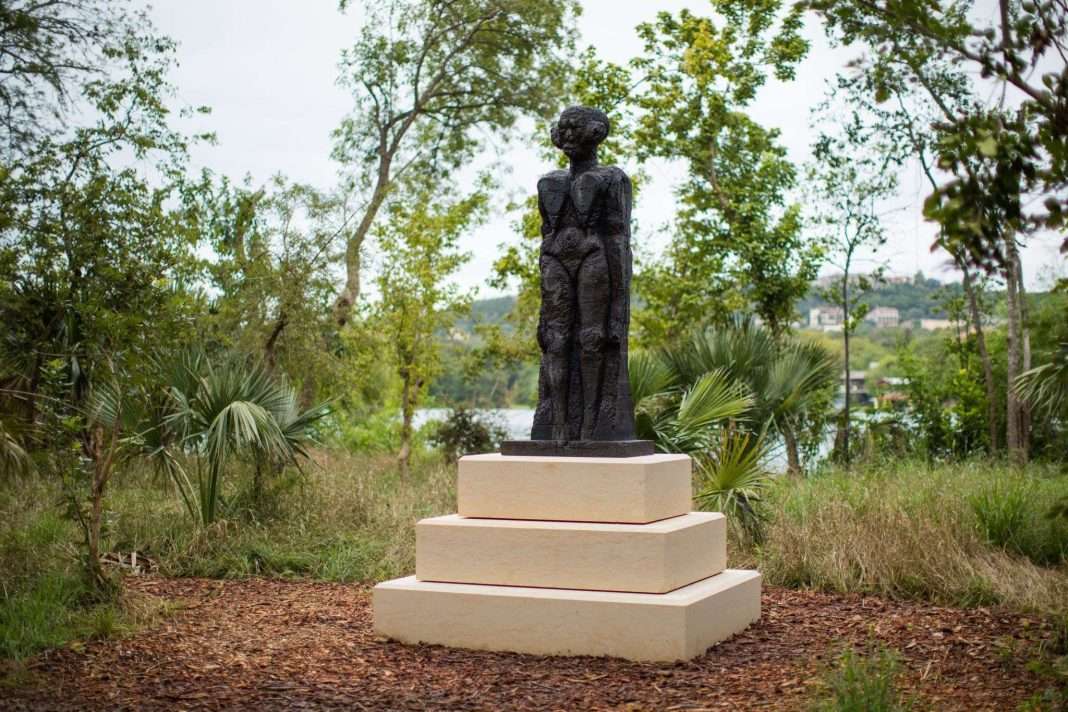 Huma Bhabha could be described as part visual artist, part archeologist. She sifts through sources past and present, working materials to create layers of meaning.

On a preview tour of her current show “Huma Bhabha: Other Forms of Life” on view at The Contemporary Austin, Bhabha, who is assuredly and perhaps ironically self-composed, told me, “the work is very much about emotion. It is emotional.”

[su_pullquote]”Huma Bhabha: Other Forms of Life,” Through Jan. 13, 2019, The Contemporary Austin, thecontemporaryaustin.org[/su_pullquote]

Bhabha’s work has addressed war, recollections of place, and displacement. Born in Karachi, Pakistan, she moved to the States in 1981 to attend Rhode Island School of Design and followed that up with an MFA at Columbia University.

Today, Bhabha is reluctant to comment on specific political events though she has memorialized victims of war in past projects. And this year’s Met Rooftop Garden Commission titled “We Come in Peace,” which Jerry Saltz called “among the best Met roof sculpture installations since the program began in 1987,” certainly alludes to peace and conflict struggles in South Asia and the neighboring Middle East with a monumental Burka-like wearing hybrid figure prostrating before an alien-like idol.

“I think the work is still very much related to conflict, although I don’t make it specific because it has been going on so long and spread,” she says. “The wars of the early 2000s are still going on and when the media shift happens, people forget, but it hasn’t ended. All you can do is create a form of expression, as long as people don’t walk away.”

“Other Forms of Life,” organized by the Contemporary’s Julia V. Hendrickson, includes sculpture, works on paper and photo collages. Several of the sculptures implement ephemeral or found materials of Styrofoam and cork and inexpensive chicken wire and plaster. There is also a bronze sculpture, “God of Some Things” on the grounds of the Contemporary’s Laguna Gloria location.

Bhabha notes that she did not train in sculptural practice and actually prefers to discover things while working with everyday media others might discard.  “I figure out ways to make assemblage or to make armatures without welding.”

If she needs to have a bronze made, like the exhibition’s “Constantium,” she gets other people involved to create the rubber mold from a cork and/or Styrofoam piece — and does so with remarkably exact results. Much of her work is, as she puts it, “essentially about the way I treat material, difference in material, and the textural expressionistic raw finish. Everything has texture.”

Take “Jhukarjodaro,” a sculpture from 2011. This powerful work depicts one of Bhabha’s recognized motifs, the foot. The seven-foot long singular foot sits atop a roughly two-and-a-half-foot-tall pedestal. Bhabha tells me she has worked with feet as artistic forms a lot and sees this particularly massive one as “almost part of a colossus or giant monument.”

Remnants of clumpy plaster skin both cover and expose a wire skeleton suggesting an explosion has completely detached the body leaving only this disfigured foot. Still, like in an Archaic Greek kouros, the foot is a symbol of agency and movement and seems firmly planted on its pedestal. There is a torn photograph of a brushy, yet barren landscape affixed to the base, implying a groundline and more importantly, a memory of place.

As Bhabha says, “it is architectural and at same time visceral.”

Five figures reminiscent of so-called primitive statues of Africa, Oceania and prehistory are arranged ceremoniously in a squarish formation. Simultaneously figural and abstract, they stand upright and self-contained, like totems. Bhabha acknowledges a longstanding visual and ideological conversations with modernist sculptors like Brancusi and Giacometti. Cork surfaces are pocked and creviced conveying age and the environment, deterioration and decay.

“Sometimes I draw it out, then play with it. The more you work it, the more you see what happens. So, the works are planned out, but not entirely because so much can happen in between.”

I point out a work called “Once,” which in addition to using things like clay, wire, Styrofoam, acrylic, paint, and wire mesh, features a decently sized marble block. The surprising appearance of this high-brow medium turns out to be of course, another found element, this time part of a lamp someone gave the artist.

Yet it certainly doesn’t read as “lamp” and Bhabha is very clear when she says, “I’m not into appropriation.”

Other newish works in the show are full-color ink and collage on photographs. The eighty-by-fifty-inch “Untitled,” depicts what appear to be three golden retrievers stacked on one another vertically. While two dogs at the bottom appear to be rough housing, the narrative remains a mystery, due to the positioning of the animal shapes, collaged cannabis plant detail or “orbs” from the magazine High Times, along with the layering of paint at the borders.

Hybridization, mutation and even disfigurement, similar to Bhabha’s sculpture, come to mind. (I thought of mythological beast Cerberus.) However, combining two of the twenty-first century’s most popular subjects — cute dogs and weed —reveals Bhabha’s sense of humor. Playfully, Bhabha relates the image to a woodcut print she owns of the Laocoön where the famous Trojan priest and sons are replaced by monkeys. The exhibition’s title is after all, “Other Forms of Life,” a nudge to science fiction, one of the artists frequent influences, and just another layer in her work.

At the end of our time together, I thank Bhabha and tell her I’ll spend some time digesting what I’ve seen and heard before I start writing.

She says, “That is a good word to use, digesting. Influences aside, the work is digested. It comes out looking not entirely like anything.”