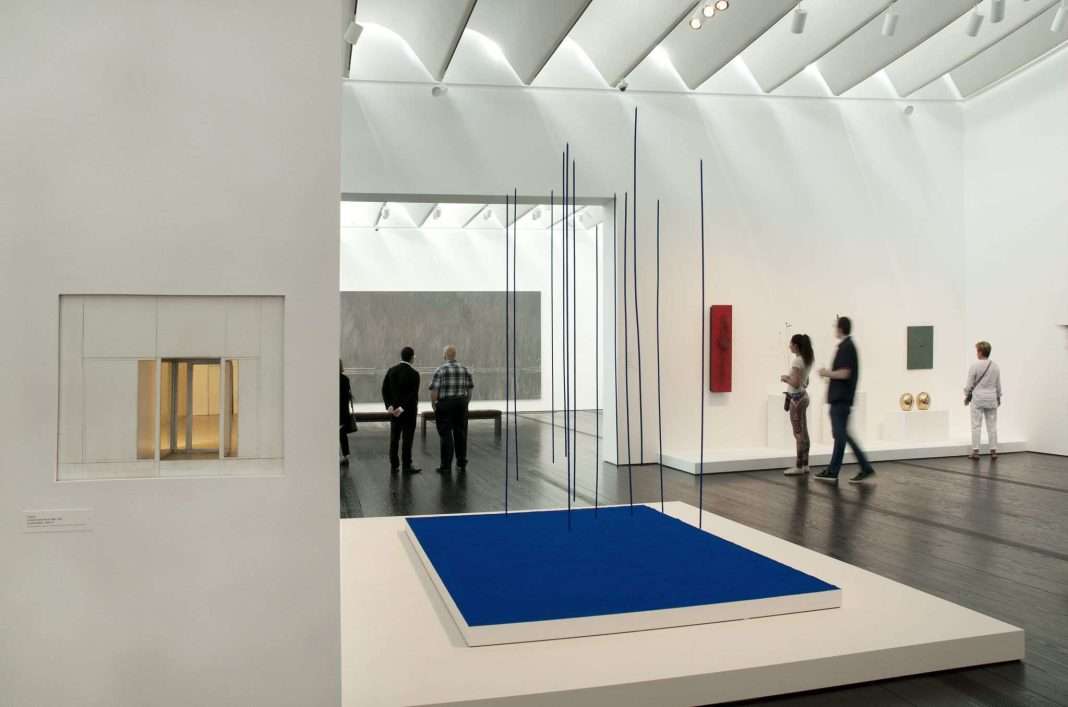 It’s been a big year for the Menil Collection.

The Houston art museum’s primary building underwent renovations this summer, which included a reinstallation of its extensive permanent collection. The Menil’s collection spans the ages but fans of the museum were accustomed to work from four distinct artistic eras: antiquities (heavily Byzantine, but including their lauded Americas and Africa collections), Modernism, Surrealism, and contemporary works. When the Menil reopened to the public in late September, new audiences were reintroduced to these creative epochs—but through a new lens.

Physically, the space feels reignited. Upon first glance, the main campus’s exhibition space breathes easier. Many of the non-load bearing walls in the landmark Renzo Piano-designed building were dismantled and artworks came out from hiding behind their glass façade. New tiered platforms punctuate the Americas display and help tell the story of this folk art with greater detail and more access for audiences; this style of more dynamic displays permeates throughout the collection and helps highlight work that was otherwise fading into gallery walls.

Likewise, natural light streams in more easily through the Menil galleries, creating a serene balance against the museum’s refinished Loblolly pine floors, painted a muted black. You’ll also find some more playful inclusions of work, if you take the extra time to look. (Be sure to spot the “hidden” Christo, tucked into a wall in the contemporary gallery.)

New curatorial choices also mark the Menil’s reopening. The refreshed gallery spaces showcase the breadth of the Menil collection as it pertains to individual artists, by contrast to galleries that were formerly organized more in accordance with era; it is a great treat to see such expansive works from Max Ernst (a favorite of the Menil’s) or Rene Magritte, in one location, and to notice the subtle changes that evolved in their work over a lifetime.

Additionally, there seems to be an added emphasis on showcasing more contemporary work, bolstered by sculptures from American contemporary artist Leslie Hewitt and selections from Claes Oldenburg’s Geometric Mouse series.

The greatest achievement for the Menil’s grand reopening, however, remains the diversification of its permanent collection, which had not aged to reflect the cultural call for greater representation. More female artists are on display (look for new additions from Roni Horn, Lee Krasner, and others) while additions to the Africa collection focus not just on the continent’s rich history, but the cultures that endured such extensive upheaval at the hands of European-African slave traders.

And if that wasn’t enough, the Menil Drawing Institute opened Nov. 3.

The Menil Drawing Institute represents an intimate space for a particularly personal medium. Designed by Los Angeles-based architects Sharon Johnston and Mark Lee (Johnston Marklee) the $40 million 30,000-square-foot Drawing Institute houses only one gallery hall with the remainder of the building’s interior dedicated to Menil staff.

Audiences see only two pieces of work — site specific drawings from Horn and a sculpture from Ruth Asawa — before entering  the primary gallery which currently houses “The Condition of Being Here: Drawings by Jasper Johns.” This inaugural exhibition navigates the artist’s career through drawings and illustrations. Many of the works feature motifs inherent to Johns (look for maps, the American flag, letters, etc.) but some surprising inclusions including a rough portrait of the artist’s face in etched charcoal and several encaustic and ink works.

The Johns exhibition overall expands on the Menil’s promise to showcase drawings and indeed presses audiences to define what a drawing is: can they be conducted on plastic? Through wax? Are they doodles on napkins or blueprints of installations? And arguably, Houston will be able to see those questions advanced through future programming.

The Menil Collection is an artistic feat in its own right and has come to more widely represent the city it calls home. It is an arts institution built on oil wealth that seeks to enliven philosophical questions about who we are and what creative elements connect us together. And in the reintroduction of the permanent collection, as well as through the expansion with the Menil Drawing Institute, we see the contemporary stewards of the Menil Collection actively trying to expand who those very questions are posed to.

The Line-up: Eleven Texas exhibitions to see during spring break, and beyond