A month before the world shut down to the coronavirus pandemic, playwright and University of Texas professor Lisa B. Thompson, saw a production of her hit play “Single Black Female” have a run at Austin’s Ground Floor Theatre.

Since its premiere in 1999 in Thompson’s hometown of San Francisco, “Single Black Female” has been regularly produced throughout the U.S. and Canada, including a successful Off-Broadway run in 2006. The two-woman show is a collection of comedic vignettes and monologues that riffs on the romantic, social and professional travails of single, middle-class Black American women.

Her scholarly book “Beyond the Black Lady: Sexuality and the New African American Middle Class” was published by University of Illinois Press in 2009.

Thompson has had three plays premiere in Austin since she arrived in 2012 to take up the position of professor of African and African Diaspora Studies at the University of Texas: “Underground,” “Monroe” and “The Mamalogues.”

Thompson’s plays embody character and story thoughtfully examining the Black family, motherhood, migration, racial violence, and trauma. She is deft at writing about present times and about decades past. And she remains unafraid to dig into her own family’s history.

“Thompson situates her personal family narrative squarely on top of the the broader story of the Great Migration of African Americans out of the south after WWII,” Sightlines theater critic I.B. Hopkins wrote of “Monroe.” (And) celebrates the courage and the faith of the generation that bravely imagined a better future.”

Another odd bit of timing for Thompson as theater remained shut to the pandemic: In August 2020, Northwestern University Press published “Underground, Monroe and The Mamalogues: Three Plays.” As a playwright, it’s Thompson first published play collection — a premiere of its kind — and a wholly other way for her work to exist in the cultural landscape.

Sightlines: For people who may not have seen “Underground,” “Monroe” and “The Mamalogues,” how would you describe the plays?

Lisa B. Thompson: They are all glimpses into the lives of Black middle class coverage, glimpses across regions and time. The first play, “Monroe,” is set in the 1940s is Louisiana. “Monroe” is now beginning of a triology that I’m creating on Black migration from the South to California, and then the later reverse migration. “Underground” finds two highly educated Black men debating what it means to be a revolutionary, and the nature of revolution itself, in the post-Obama era. And “The Mamalogues” is very unique view of what means to be a single mother and be Black — a highly resourced, highly educated Black woman, and how that makes you unintelligible to other people.

I think in all three plays, I’m also following the class ascension of Black people, over time and generations. And I write about the Black middle class because I discovered that when I got to college that I wasn’t — middle class, that is. I was a first generation college student at UCLA and I met another African American young woman like me who was a freshman living in the same dorm, on the same dorm floor. But she had things I had never imagined having, like her own car. We grew up in the same city, San Francisco, but we lived on the ‘other side of the tracks’ — the BART tracks, that is. We had these parallel lives in some ways and in some ways not. I was fascinated by that.

S: How has Austin as city in particular shaped these plays, or your work as Black playwright in general?

LBT: Austin’s been a place that’s embraced me and allowed me to grow as an artist and as a cultural studies scholar and really bring those things together for me. Through my administrative work at the Warfield Center (for African and African American Studies), I’ve been able to bring African American artists to Austin for workshops and then invite the community. That feeds what as a scholar and an artist I love most which is African American culture and theater performance.

It’s been wonderful getting to know the African American artists who were here before me like Marcus McQuirter, chair of the Austin Community College Drama Department and (playwright and performer) Zell Miller III. There are so many trying to build a stronger Black theater community in Austin, because it’s really under-resourced and has been for a long time.

Scriptworks, Ground Floor Theatre, Bonnie Cullum and Rudy Ramirez at the Vortex theater — they’ve been fantastic about supporting and producing my work. “Monroe” won Austin Playhouse’s Festival of New Texas Plays and they gave it a production in 2018. And I’ve since fallen completely in love with the Austin Playhouse family. Now I’m on the Playhouse board. It’s been a wonderful place for me.

S: The Deborah Roberts collage on the cover of your book is just wonderful and Deborah’s now has her first museum show here in her hometown. How did the cover image come about?

LT: I got to know Deborah when she had an exhibition Art Galleries at Black Studies in 2017. I then visited her in her studio and collected some of her artwork. My book is plays that have premiered in Austin, Deborah’s an Austin-based visual artist — I was thrilled when she offered to let use one of her artworks. Deborah captures the haunting, the beauty, the grace and the strength of Black women and girls. 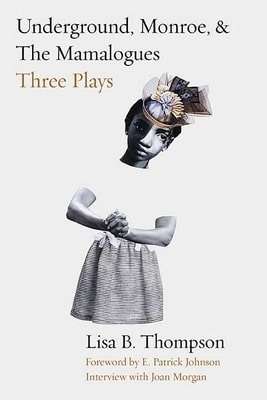 S: It’s been a year since theaters shut down because of the pandemic. Last fall, some New York theater professionals offered their ideas on how to revolutionize their world. What revolution do you want to see in the theater world, locally and beyond?

LBT: Last year on March 9, I had just come home from spending a long weekend in New York seeing tons of theater, back-to-back shows. It turned out it that was the last weekend before the New York theater world shutdown.

For me, the convergence of the pandemic and social justice protests came together in the “We See You White American Theater” manifesto. That was hugely important for me to see BIPOC (Black, Indigenous and people of color) theatermakers make demands on the establishment. Black theatermakers are no longer hiding their experiences in American theater.

I’ve been pushing for a long time for Black artists not to just have their plays presented in February (Black History Month). We can also do a better job of making theater that spans across institutions and class. We need more free public theater that comes to schools and community places. Theaters that are local should be thinking about how they can truly grow their audiences beyond the regular, conventional theater-goer. What does it mean to feel really welcome at the theater?

I also think sometimes theater itself doesn’t have the right PR machine. Most people don’t understand how theater gets made, the enormous amount of work and the number of people it takes to get a play to the stage

We need more shelf space for plays as literature too. In the pandemic, reading a play together or even acting it out is a great thing you can do at home. My play collection is not eligible for any literature or book prizes or awards. We don’t read plays as literature anymore and we should.

I’d also like to see more diversity not just around race, gender, sexuality and class, but also age. Yes, we were all 25 once and it was great, but guess what — we didn’t die after that! And we continue to have amazing ideas and do amazing work. I believe that every week you should have a conversation with someone who is 20 years older than you and a conversation with someone 20 years younger than you. Then we will all have a richer conversation going about everything.

S: What’s coming up for you?

LBT: I have a residency at the McDowell Foundation this summer and I’ll be working on the two plays in the trilogy. The second play is “Gold” and it will be set will be set in 1972 in San Francisco at the height of the city’s Black population when it was 13%. It is now 5.6%. The final piece of the trilogy is set in Austin and it’s called “Flood.”

Basically the triology is my life. My mother came from Monroe, Louisiana, and left the South and migrated to California. And then later I did the counter-migration from California back to Texas. I am in some ways the gentrifier myself, being someone from California who buys a house in a former Black neighborhood.

It’s also so complex but it’s important to talk about the ideas of class and migration in the Black community and how they have changed over the years. It’s the throughline of my work — the Black middle class and what it means to feel privileged but at the same time not be privileged.

Theater review: ‘Ride the Wave’ at the Vortex

Penfold Theatre’s ‘A War of the Worlds’ reimagines the famed radio drama, and probes artistic ethics