Film review: Deneuve reigns supreme as the icy star of ‘The Truth’ 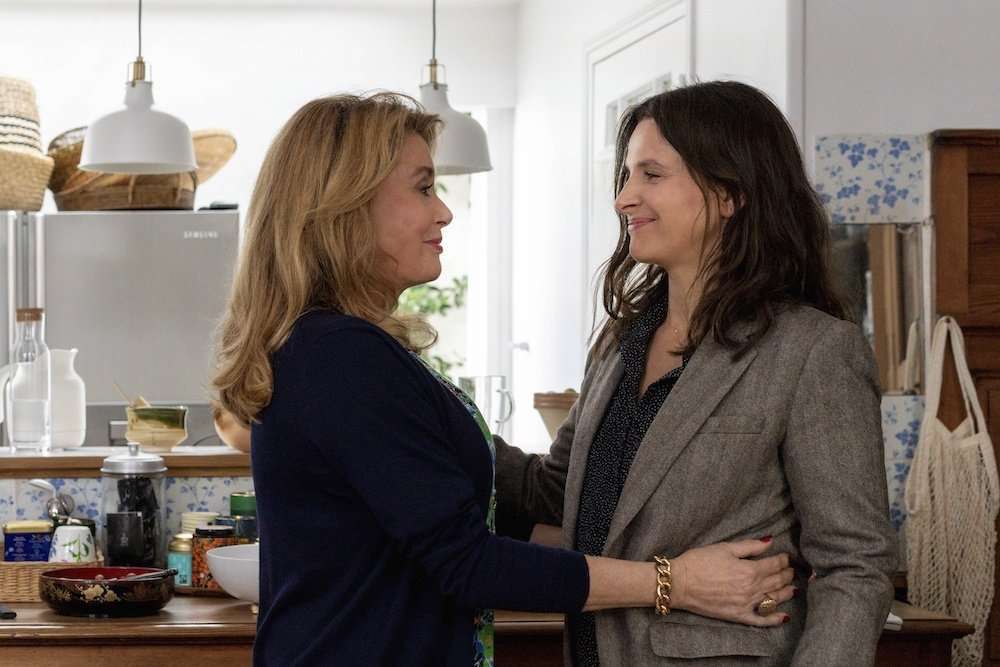 Fabienne smokes constantly but manages a few terse answers to the journalist’s questions, but it’s clear she thinks he doesn’t know what he’s doing. And you get the idea that she thinks that about most folks in her orbit. The journalist sees a middle-aged woman coming to the front door and asks whether they need to take a break. Fabienne looks out the window and says, “It’s nothing. My daughter and her little family.”

The comment foreshadows the rocky familial tale to come. The daughter is Lumir (Juliette Binoche), and she’s a screenwriter in the United States and married to Hank (Ethan Hawke), who is quickly told by Fabienne that he doesn’t actually act but merely imitates. And then there’s their curious young girl, Charlotte (Clementine Grenier), who should be getting smothered with kisses by her grandmother but isn’t.

Such is the icy, aloof demeanor of Deneuve’s Fabienne, and if anybody can be icy, then Deneuve is the queen. Her daughter and the “little family” have arrived in Paris to celebrate the publication of Fabienne’s memoir, titled “The Truth.” That’s one reason why Fabienne was granting an interview to the aforementioned journalist. But Fabienne also has a supporting role in a science-fiction film. And she huffs and puffs that it won’t be great, probably because she is unaccustomed to playing second fiddle.

The star of the film is Manon (Manon Clavel), who never ages because she spends most of her time in space — where aging doesn’t occur, supposedly. Manon is the epitome of youth and beauty, but she has some sort of disease that would kill her fairly quickly if she stayed on earth. So she drops in on Earth for a couple of days every seven years to see her only daughter. This takes place throughout the film, with a series of progressively aging actresses playing the daughter. And near the end of the movie, Manon is still young and beautiful, and Deneuve is playing a 70-something woman who is Manon’s daughter.

Yes, this is typical territory for the Japanese writer/director, who revels in complicated family situations. He won the Palme d’or in Cannes for 2018’s “Shoplifters,” which deals with a desperately poor family who makes a living by shoplifting and takes in what they believe to be an orphan and make her a member of the family.

The writer/director wrote the script in Japanese and had it translated into French by an interpreter. And it’s clear that Kore-eda’s past work got the attention of Deneuve, Binoche and Hawke, all of whom have been arthouse mainstays for years. By all accounts, Deneuve had great fun on the set, living up to the iciness that was required. But Kore-eda supplies lots of humor, too.

At one point, Fabienne, Lumir, Hank and Clementine are riding in a limousine to shoot a scene for the sci-fi movie, and a discussion begins about all the great European actresses who have alliterative names: Simone Signoret, Anouk Aimee, Greta Garbo. And then from the front seat comes a suggestion: Brigitte Bardot? To which Fabienne emits the hautiest harrumph in cinema history.

In the end, “The Truth” becomes the story of a mother and daughter, not only on the big screen but also in Fabienne’s home. She hasn’t given a copy of the memoir to her daughter before publication, and when Lumir starts to read it during her visit, she’s perturbed by the lack of “truthiness” in the book.

A lot of the debate centers on whether Fabienne stole a great part from her best friend, Sarah, long ago by sleeping with the director. And it turns out that Lumir and Sarah were quite close — much closer than Lumir and Fabienne. To which Fabienne replies: “I’d rather have been a bad friend and a bad mother and a great actress.”

And that is a big part of this move’s truth.

But there’s much more, if you get a chance to watch it. It’s available as video on demand, as of July 3.