Does Austin have a new festival of new opera? Almost

There’s no wrist band, but there is a “Five Weeks of Opera” punch card. And if the trio of Austin arts leaders behind the current continuous stretch of new opera are reluctant to call it new festival in already festival-fatigued city, they’re embracing, and promoting, the kismet of it all.

“It’s a result of fortuitous timing,” says Julie Fiore, founder of One Ounce Opera and newly-appointed Director of Audience Experience for Austin Opera. “We didn’t necessarily set out to have five consecutive weekends of new opera. But when the schedules all lined up consecutively, it just made sense to us to point that out and present it together to the public.”

The marathon started with LOLA’s production of “Lardo Weeping,” an operatic portrait of a reclusive, idiosyncratic woman, a new work-in-progress by Austin composer Peter Stopschinski. The action continues with One Ounce Opera’s “Fresh Squeezed Ounce of Opera” March 22-31, an annual showcase of new micro-operas, each no more than 20 minutes long. And Austin Opera culminates the celebration April 5 and 6 with the launch its new Opera ATX initiative. David T. Little’s “Soldier Songs,” a one-hour multimedia one-opera that incorporates video, theater, and rock-inspired musical themes, presenting an intimate view of war through the personal stories of veterans. 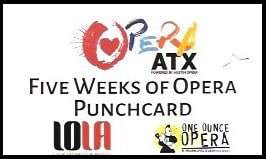 Fiore calls her popular, annual Fresh Squeezed Ounce of Opera production, which is staged in the unpolished East Austin warehouse venue, the Museum of Human Achievement, “a gateway drug for other opera.”

“The more that One Ounce and LOLA can be the boots on the ground for new opera, the more that we can get people in the door for OperaATX and traditional productions  that Austin Opera has.”

Read: “Alone with the audience: ‘Lardo Weeping’ is opera in the making”

“The real challenge in building an audience for opera doesn’t not lie in attracting new audiences, but in retaining them,” says Annie Burridge, Austin Opera managing director and CEO. “Across the industry, we retain only 10 percent of new audience members. So the more entry points we can offer people to opera, the better.”

It makes sense from an arts employment perspective too.

“(Austin Opera) depends upon local talent — high caliber classical musicians and singers,” says Burridge. “So the more opportunities that classical singers have in Austin only increases the likelihood they’ll that those singers will stay and we’ll have the talent pool we need.”

Plans to align the schedules, and marketing of OperaATX’s 2020 production, “Fresh Squeezed Ounce of Opera” and LOLA’s premiere of “Lardo Weeping” next year are underway.

In the meantime, bring the punch card to “Solider Songs” and if you have two or three punches, you’ll be eligible for prizes.