The Austin artist challenges the romanticized notions of an artists' studio by setting up outside, in public, and in a cage 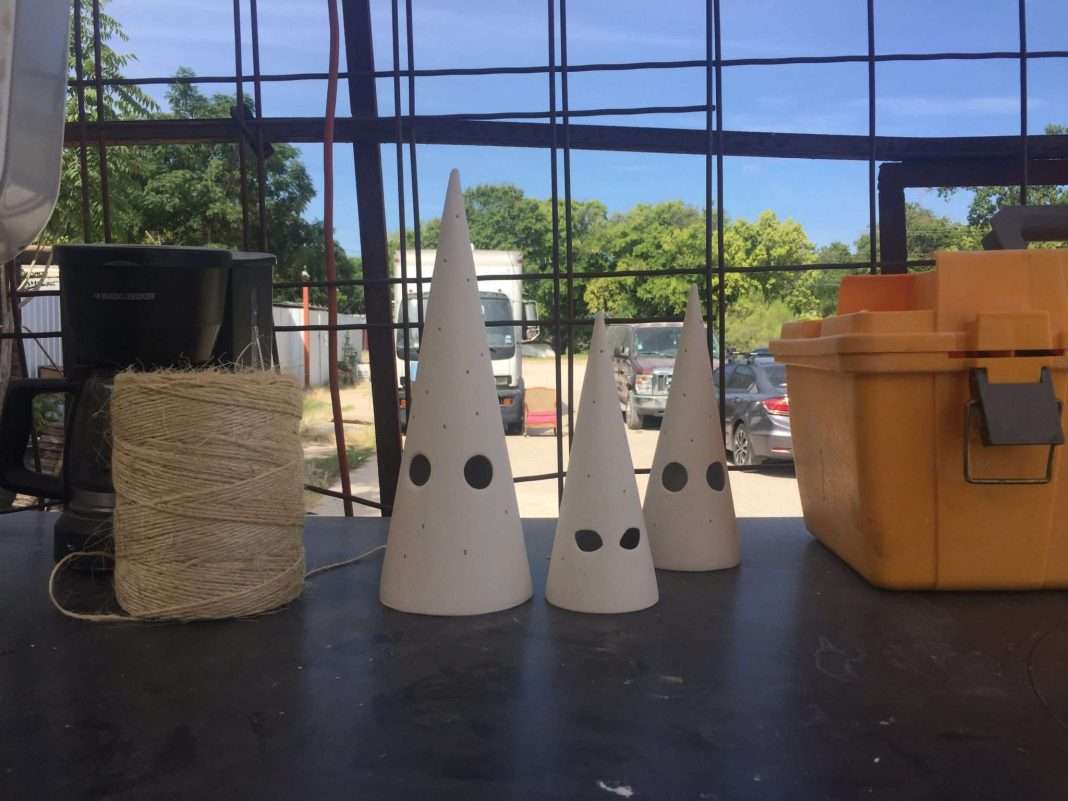 Rubin’s artistic work space is actually a rusted wire enclosure atop a 20-foot trailer parked in the back parking lot of the Canopy arts complex in East Austin. Dubbed Cage Match, the cage trailer is a project space run by Ryan Hawk and Zac Traeger of the Museum of Human Achievement.

Typically, Cage Match hosts installations or pop-up performances. But for her residency, which launched in July and ends Sept. 9, Rubin opted to use the small, outdoor and very odd space as her studio.

“Everything about this is outside my comfort zone,” says Rubin, who typically works in a commodious — and air-conditioned — studio at St. Edward’s University where she is on the art faculty.

“And what I’m doing is not performative. I’m here working.”

When the Cage Match Project opportunity came up, Rubin’s priority was preparing a body of sculpture for several upcoming exhibits. So rather than just hustle something together to fill the cage trailer, Rubin challenged herself to work in the makeshift outdoor studio in the Texas summer. (The cage has temporary cover to offer shade and is outfitted with several big fans.)

Rubin’s residency, as it were, is designed to raise questions.

“What do we think of when we think of an artist’s studio? What does it look like to make art?” she asks. “Nobody really has a sense of the length of time it takes to make art either. Art is labor.”

“A studio and a practice as much a mental space as anything else,” Rubin says.

She has had many studios in her career. One of her first, in her native Chicago, she found in a cooperative studio space after college, working late into the night after finishing a day job. Graduate school at the University of Washington came with a campus studio. Ditto at the University of Illinois where she taught before joining the St. Edward’s faculty in 2015.

At Cage Match, Rubin posts a schedule of her work hours on her Instagram, though it’s not necessarily an invitation to hang out and chat her up.

“Ultimately, my practice is solitary,” she says.

Regulars at the Canopy complex say hello and offer to bring her cold drinks. A passing FedEx deliveryman has so far been the only to ask specifically why Rubin is in a cage. Other passersby have asked if she’s OK.

And if seeing an African American woman in a cage makes people uncomfortable — good.

“It should be uncomfortable to see anybody in a cage, no matter the circumstances,” Rubin says.

This fall, Rubin will have work in “Craft2018” at the Houston Center for Contemporary Craft, and in a group show at Austin’s Dimension Gallery. However her solo exhibit, “Everything You Ever” at Women & Their Work November 17 through January 10, fully debuts her latest ceramic sculpture series.

Rubin is literally building this new work atop the provocative shapes of her previous series, “Always & Forever (ever ever).”  Though the “Always & Forever” sculpture immediately evoke Ku Klux Klan hoods, Rubin has always maintained that the conical shapes with eyelike slits are a more diffuse symbol, conjuring a dunce’s cap, a sorcerer’s hat, or Renaissance clerical headwear.

Mundane mass-produced consumer objects are Rubin’s chief creative source. She recreates their forms in delicate yet color-saturated porcelain, the surfaces highly decorated with hair-thin piping or tiny dots and spikes. The intricate motifs on Rubin’s sculpture often serve as a kind of artistic hieroglyphic. On her “Always & Forever” series Rubin marked out routes of the Great Migration, a movement beginning in the 1910s of approximately 6 million African Americans from the rural South to the cities of the North.

Recently, however, Rubin found a new fascination with ball moss, that ubiquitous bromeliad which grows on Texas trees and is commonly misunderstood to be a parasite, responsible for strangling a tree. Ball moss, however, actually derives its nutrients from air and rain using the tree just as its structural support.

Rubin collected bushels of ball moss and in her Cage Match studio she is carefully dipping them in porcelain slip, then attaching them to a conical head form, the wispy slip-covered moss balls forming a Medusa-like crown. When fired, the ceramic sculptures will be in varying shades of brown, the slit-eyed heads peeking out just enough to be seen.

Continuing the issues raised in “Always & Forever,” these new pieces confirm the roots of racism and oppression go deep. It’s the centuries-old tree that’s sick, not the ball moss that’s grown along it.

“Our gift and our curse as Americans is that we believe that everything is new,” Rubin says.

Take the nation’s current political and racial divisiveness. “None of it is new,” Rubin says. “And yet everybody acts like it’s something that just suddenly happened since the last election.”

“We’ll keep repeating the same thing as long as there’s no acknowledgement of our history.”